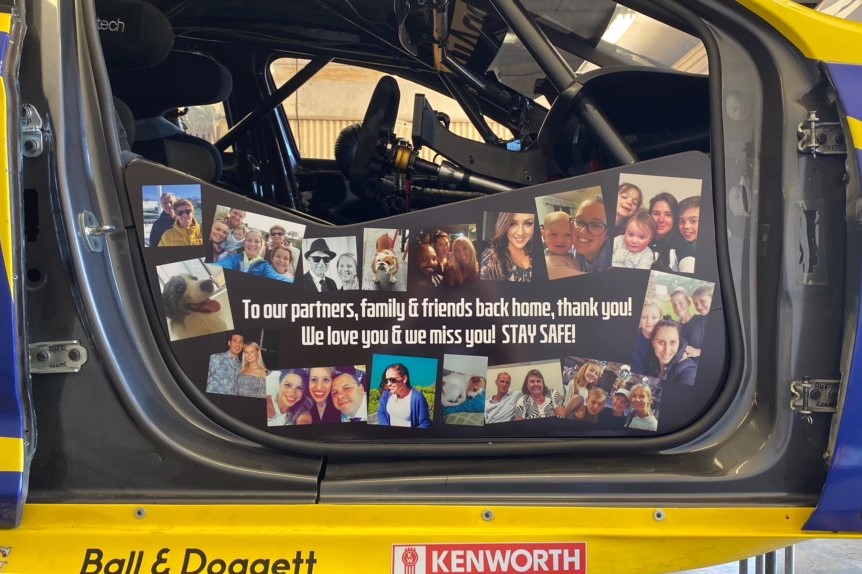 Team 18 drivers Mark Winterbottom and Scott Pye will carry a tribute to the families of the Melbourne-based crew on their cars this weekend.

A photo montage has been printed onto the side pillars inside each of the Holden ZB Commodores.

This weekend’s CoreStaff Darwin Triple Crown marks the sixth consecutive week that Team 18 and other Victorian-based Supercars teams have been on the road.

Teams left for New South Wales on July 6 before the border was closed in the midst of the coronavirus pandemic.

With the season looking increasingly likely to finish in mid-October and teams set to be away until then, Team 18 has paid tribute to those waiting at home in Melbourne.

In the dash for the border, Winterbottom had to leave his wife Renee and three sons in Melbourne.

“We’ve got our families riding with us this weekend which is a nice touch for the team to have on the side pillars of the car,” said the Irwin Racing driver.

“It’s pretty special to do that for them watching from home, and hopefully they can bring some extra fight and good luck to the team this weekend.”

Pye claimed his first podium with the team at the Darwin Triple Crown, finishing third in Race 12 of the season.

The DeWalt Racing driver, who also hails from Melbourne, will carry an image of his bulldog Basil.

“We’ve got a message on the inside-panel which is to our friends and family around the country who we miss so much,” said Pye.

“For me, I’ve got my dog Basil, my sister, my niece and nephew, I’ve been thinking about all of my family while we have been on the road.

“For all of our crew it’s a difficult time at the moment, none of us want to be away from our family but we are doing what we can to keep this sport alive and I hope we can put on a great show this weekend for everyone watching at home.”

The pair are hoping to continue their run of form at Hidden Valley Raceway.

“Normally it’s 12 months between events at the same track, but this time it’s only five days which is great from a performance point of view,” said Winterbottom.

“I thought our team performance at the Triple Crown was good, our results were strong and we hauled a good bank of points towards our championship.

“Going back there we always want to do better, and if we can do that then we will be in contention for podiums, we have been so close to it the last few rounds in the Irwin car.

“The soft-tyre format will be interesting in how that will play out, but we will pretty well roll out for that first lap on soft tyres knowing what to expect from the track.”