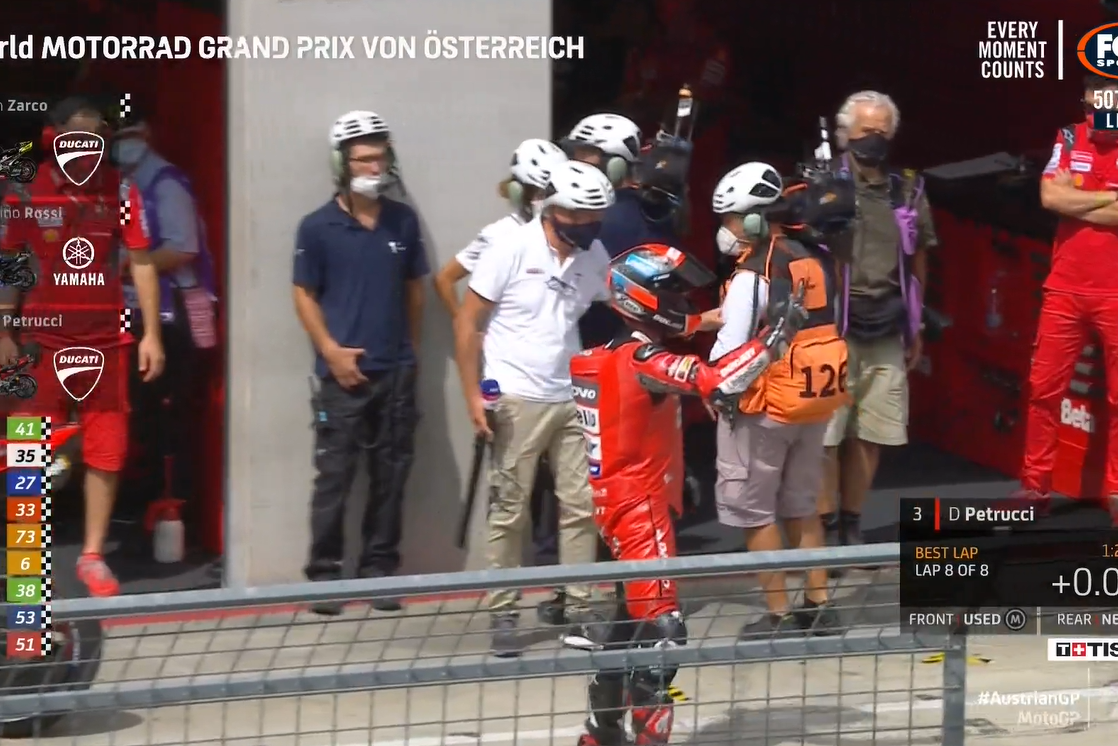 Danilo Petrucci has received an Official Warning for gestures including displaying the middle finger to Aleix Espargaro after Qualifying 1 at last weekend’s Austrian MotoGP.

Petrucci took exception when the Gresini Aprilia pilot dropped between him and Valentino Rossi as he completed a flying lap around the Red Bull Ring.

The Ducati Team rider was seen gesticulating on the race track on their following lap, before continuing to vent his anger in pit lane post-session.

Petrucci would later admit that flashing the middle finger was “too much” but thought it may have cost him progression to Qualifying 2, which he missed by 0.024s.

“For sure, it was a really good entry to Turn 9 when I saw Aleix coming on my line and then I had also Aleix in front of me in last corner,” recounted the Italian after that session.

“I had to wait a little bit to open the throttle because he was really close. Maybe I could be in Q2 (without the incident).”

Stewards found that Petrucci had “display(ed) derogatory gestures to another rider” but opted for an Official Warning given it was his first offence.

Johann Zarco and Franco Morbidelli (Petronas SRT Yamaha), whose coming-together set off the horror crash on Lap 9 of the premier class race, were summoned to meet stewards on the eve of this weekend’s Styrian MotoGP at the same circuit.

Stewards have announced that a decision relating to that matter will be published on Friday (local time), while modifications have been made to Turn 3 in response to the near misses for Maverick Viñales and Valentino Rossi.

Morbidelli insists that Zarco was in the wrong, despite the Frenchman’s Esponsorama Racing team citing telemetry which shows he braked later at Turn 2 than in previous laps.

“When we collide, we are braking, since some time,” said the Italian.

“From the moment I touch Johann, I’m braking from 50 metres, so it’s (at) 50 metres I am braking. The problem is Johann is changing his line in a super unnatural way, leaving me no space while braking.

“Presenting the fact that he braked two metres later means nothing because the line was wrong, the approach to the corner was wrong, the overtaking manoeuvre was wrong and the exit was wrong.”

Morbidelli has, however, stepped back from labelling Zarco “half a killer” in the aftermath of the crash.

“I am sorry about what I called Johann after the race,” he admitted.

“It was too strong a statement. It remains the fact that Johann made a mistake.

“It remains the fact that Johann’s mistake, or Johann’s action could have ended way worse than how it ended. But it is still a mistake.

“I don’t know his feelings, I’m not in his head and I cannot judge what is going through his mind. I can just judge his actions.”

Zarco will not ride on Friday in any event having not officially been declared fit given less than 48 hours has passed since surgery on a fractured scaphoid on Wednesday, but could yet be cleared to start Saturday’s Free Practice 3.

Hafizh Syahrin will sit out the Moto2 round having been declared unfit, despite avoiding any fractures, after careering into Enea Bastianini’s stricken bike last weekend.