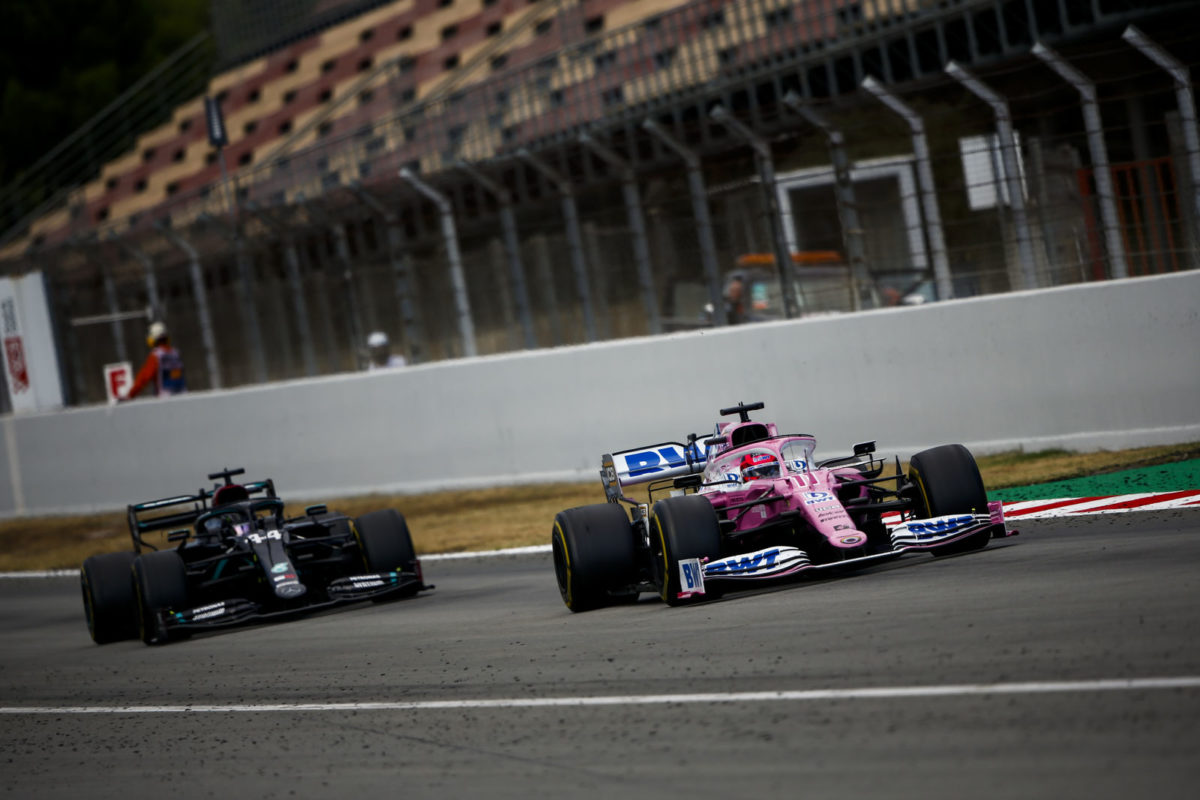 Sergio Perez being lapped by Lewis Hamilton in Spain

The penalties handed down to Sergio Perez and Daniil Kvyat during the Spanish Grand Prix came as part of a crackdown on blue flag regulations.

Both Perez and Kvyat picked up five second penalties during Sunday’s race after they were deemed to have not obeyed blue flags.

It saw the Racing Point driver fall from fourth to fifth, behind his team-mate, while Kvyat retained 12th place at the flag despite the added time.

Perez in particular felt aggrieved by the penalty, suggesting there was little opportunity to make way for race leader Hamilton any earlier.

“I don’t understand where I should have moved, Hamilton got to me very late in the lap and then in the final sector it is very tight, very narrow, so I don’t have anywhere (to go),” he bemoaned to Sky Sports F1.

“It would have been very unsafe for me to do something there but still I got the penalty. I feel it was very unfair but it is how it is.

“I am happy that at least we didn’t lose out with the points because Lance got them but I think the penalty was harsh.”

The penalties came as race control increases its focus on adherence to blue flag rules.

“My view with both of those, they effectively took way too long,” said FIA Race Director, Michael Masi.

“It was something that we discussed at the drivers’ briefing following the first Austria event actually, so at the Styrian Grand Prix drivers’ meeting.

“It was discussed that there would be much more of a crack down on blue flags this year.”

Covered by Article 2.5.5.1(d) of Appendix H of the International Sporting Code, regulations stipulate that drivers shown the blue flag under racing conditions “must allow the following car to pass at the earliest opportunity”.

“There’s a level of discretion within it to allow reasonable elements with the other cars, but those two were clearly excessive, and referred those to the stewards accordingly,” Masi noted.

“For me, they (the stewards) imposed the right penalty of a five-second penalty for not doing so.”

The Australian added that he had received positive feedback on the way race control managed blue flags throughout the Spanish Grand Prix.

“It seemed to be that after that from the blue flag report that I’ve got, it was acknowledged up and down pitlane,” said Masi.

“I actually had a number of team managers ring, and say they were really glad to see people penalised for not obeying blue flags.”