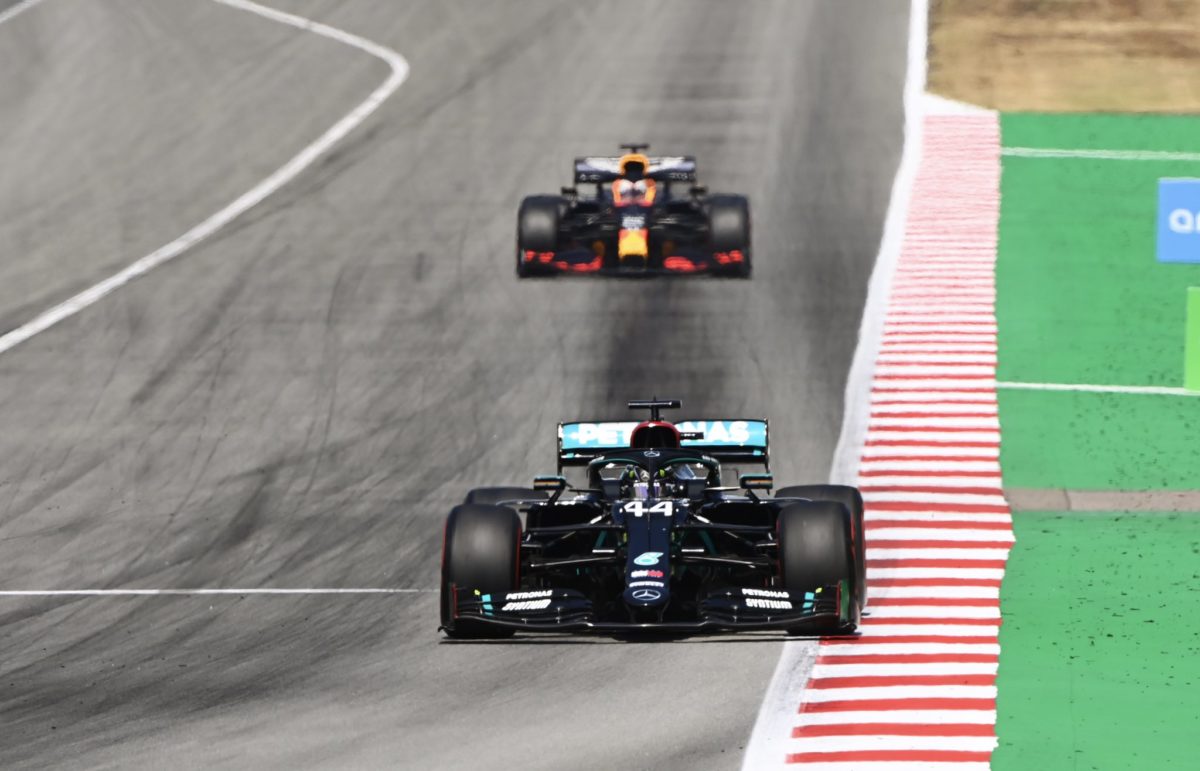 Lewis Hamilton has eased to the 88th Formula 1 win of his career with a lights to flag drive in the Spanish Grand Prix.

Max Verstappen claimed second from the start, hanging on to the spot while Valtteri Bottas picked up the final podium place.

“I was just in a daze out there,” said Hamilton.

“It was a real surprise because we had this problem with the tyres (last week).

“Management was very, very good and I think that ultimately our understanding of what happened last week, looking forward into this weekend, has inevitably enabled us to do what we did today.

“I didn’t even know it was the last lap at the end, that’s how zoned out I was; I was ready to keep going.”

From pole, Hamilton made a clean get away to lead the field into the opening turn, towing Verstappen alongside Bottas in the process.

Bottas fell to fourth from the start after being boxed out by both Verstappen and Lance Stroll into the first corner.

The Finn then fell behind Sergio Perez momentarily before reclaiming the spot by Turn 4.

Alex Albon made a strong start from sixth but found himself baulked by the wrong-footed Bottas at the first corner, hampering his run and leaving him in sixth.

Hamilton ended the opening lap well clear of Verstappen as Bottas found himself tucked up behind the Racing Point of Stroll.

In the pack, Ricciardo moved up from 13th on the grid to 12th, but lost out again at Turn 4 as Daniil Kvyat went around the outside of the Renault on Lap 2.

Bottas progressed to third as he began Lap 5, using the Drag Reduction System to breeze by Stroll on the run to the first corner.

The Finn quickly cleared out, setting the fastest lap on Lap 6 as he worked to close back up on Verstappen ahead.

After 10 laps the gap between the leaders had stabilised, Hamilton 1.6s clear of Verstappen who in turn was two seconds clear of Bottas.

Stroll had fallen some six seconds further back, in turn 1.5s clear of Perez in the sister Racing Point.

The lead Mercedes continued that march, opening the advantage in the build up to the first round of stops.

Albon was the first of the leaders to pit at the end of Lap 17, swapping the soft tyres for a set of hards.

By the time Verstappen stopped on Lap 22 he’d fallen more than seven seconds adrift of Hamilton, Red Bull feeding the Dutchman out ahead of Stroll on fresh medium compound tyres.

There was no immediate reaction from Mercedes, both Hamilton and Bottas carrying on for another lap before taking service.

Hamilton was hauled in on Lap 24, the Briton holding a 29 second advantage over Verstappen as he entered the lane.

Bottas followed his team-mate in, Mercedes double-stacking its cars with ease as it fitted medium compound tyres for both.

Hamilton resumed at the head of the race while Bottas slotted back into third, slightly further back from Verstappen than he’d been prior to the pit sequence.

Having run as high as fourth, Ricciardo finally stopped on Lap 36 to rejoin 13th.

He and team-mate Esteban Ocon were the last pit, the Frenchman having visited the lane a lap prior.

Charles Leclerc’s race came to an end when he spun at the final chicane, reporting back to the team that his engine had stopped.

Though able to able to get the car going again, it was clearly unhealthy and the Monegasque limped the back to the pits and into retirement.

That ended what had been an entertaining battle with Lando Norris, the pair squabbling over 10th prior to Ocon’s stop at which point it became the battle for ninth.

On Lap 42 Verstappen stopped for the second time, a lap after team-mate Albon abandoned the hard tyres.

The lead Red Bull rejoined in an unchallenged third, a set of medium tyres bolted on to his car.

Up the road, Bottas lifted his pace as a second round of stops saw Stroll box from fourth.

Bottas was called in for a set of soft tyres on Lap 49, trundling out of the lane as Verstappen turned into the first corner.

Hamilton was initially called in next time around, though debated with his team whether a move to the soft tyre was the right move and stayed on track for another tour.

A lap later he was in the lane, ending a 26 lap stint with his medium tyres swapped for another set of the yellow-walled rubber.

Running fifth, Sebastian Vettel had a tetchy conversation with his engineer.

With 16 laps to run, Ferrari explored the prospect of running to the end on the set of soft tyres fitted more than 20 laps earlier.

The conversation was clearly strained from Vettel, though the call was eventually made for the German to run to the flag without stopping.

Perez’s fourth place was put at risk when stewards deemed he’d ignored blue flags in the moments before Hamilton had stopped for the second time.

The Racing Point driver was handed a five second penalty while running just 5.1s clear of Vettel in fifth.

That became sixth for Vettel when Stroll used DRS to breeze by as the pair began their 56th lap, having been lapped by Hamilton a few laps earlier.

Vettel’s slide continued, dropping to seventh behind Sainz at the start of Lap 60.

With the podium places all but sorted, the two Mercedes drivers engaged in a private battle over the point for fastest lap, Hamilton setting a 1:19.822s on Lap 63.

Bottas pipped that by a tenth at the end of the same lap, the Finn pitting on Lap 65 in an effort to safeguard the bonus point.

He duly delivered on that promise, setting fastest lap on the final lap to deny Hamilton a seventh career grand slam (pole, victory, fastest lap, and leading every lap).

Romain Grosjean had a wild slide in the closing stages after clouting the kerb at Turn 8, pitching him into a half spin before the Frenchman recovered the Haas.

Out front, Hamilton claimed his 88th Formula 1 race win with a straightforward lights to flag victory.

Perez crossed the line fourth, but with his penalty applied it was Stroll who claimed the spot in the final classification with the Mexican fifth.

Carlos Sainz was sixth, while Vettel clung on to seventh with his one-stop strategy as Ricciardo rose two places to 11th, nine seconds clear of his Renault team-mate in 13th.

With four wins to his name in 2020, Hamilton now holds a 37 point advantage at the head of the world championship. Versatppen lies second, now six points clear of Bottas,

Mercedes continues to dominate the constructors’ championship, with its 221 points more than the tally of both second placed Red Bull (135) and third placed Racing Point (63) combined.

Formula 1 now heads to Spa-Francorchamps for the Belgian Grand Prix, the first of three more consecutive weekends of racing, on August 28-30.