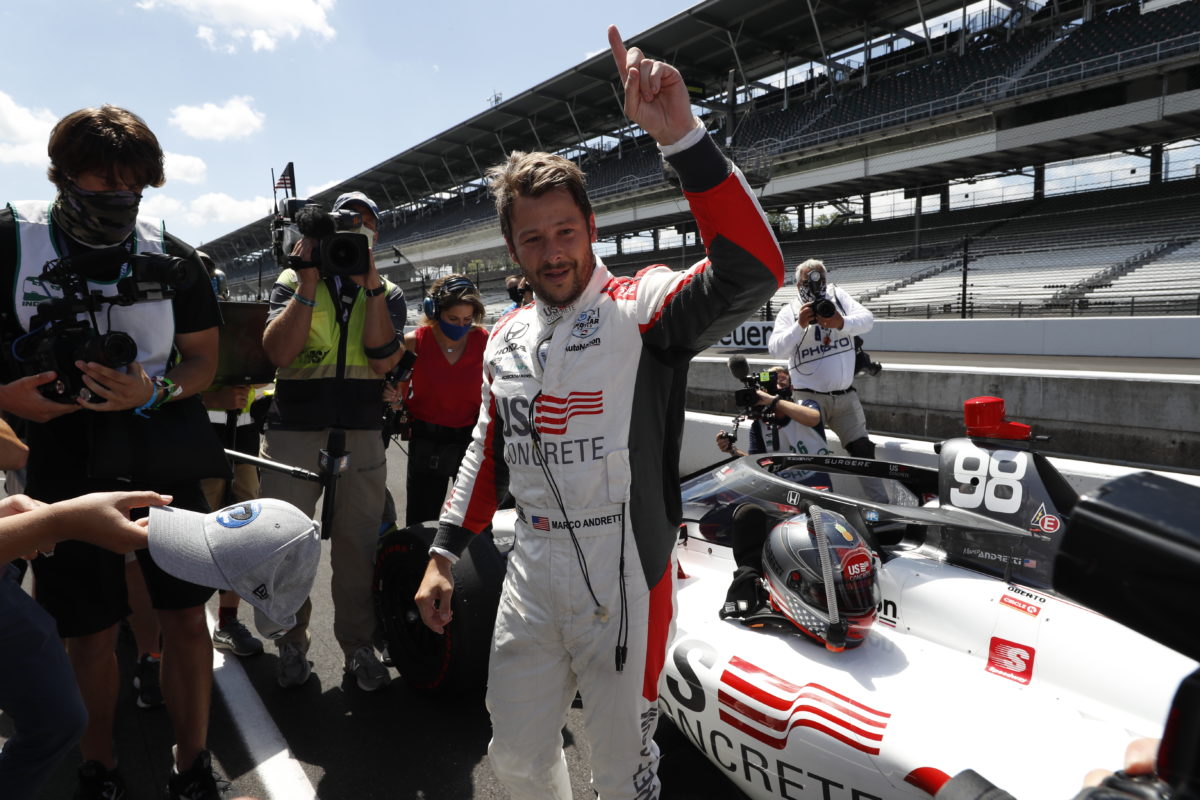 An emotional Marco Andretti has explained how he lent on advice from grandfather Mario to take pole position for the 104th running of the Indianapolis 500.

Andretti pipped series leader Scott Dixon on Sunday to claim his maiden Indy 500 pole, and first for the Andretti family since Mario in 1987.

The 33-year-old had been the pace setter leading to Sunday’s Fast 9, with Andretti firing in the quickest practice lap in 24 years on Friday, before topping qualifying on Saturday.

On Sunday, Andretti was again the man to beat, with his four-lap average good enough to defy 2008 race winner and three-time pole sitter Dixon.

Next week’s race marks Andretti’s best chance since his rookie year in 2006 to win the famous event, when a 19-year-old Andretti was defeated by Sam Hornish, Jnr on the final lap by 0.0635s.

Fourteen years on, the fire is still burning for Andretti, who defied challenging winds to win pole for the 2020 race.

“(My grandfather said) wind will scare you but it won’t crash you. He was right today. I don’t know if he’s right totally. We were able to keep it going the right way today,” Andretti said.

“As soon as I came out of the motorhome today, we were expecting winds. That’s when I kind of had a laugh, too.

“It’s a tough place. Last year I had the worst race of my career. Here we are, we can win it.

“I don’t know if I really have an answer for that one right yet. Yeah, it’s always better for fuel mileage running second. I don’t want to get yelled at by my grandfather again.”

Desperate to atone for last year’s disappointment – when he finished five laps down in 26th after starting 10th, all while carrying a 50th anniversary tribute livery in homage of Mario’s 1969 win – Marco paid tribute to his family, particularly the legendary Mario and late cousin John, who lost his battle with cancer in January.

“I was emotional. It’s funny because I was screaming after the run, so I don’t have a voice. Everybody is thinking I’m crying but I just can’t talk right now,” Andretti told reporters after the session.

“Obviously I was emotional. We put so much into it. This place means so much to us as a family. We’ve just been through so many ups and downs at this place.

“Obviously my cousin John is riding with me, my grandfather from home. We know family is pulling for us. We live and breathe this sport, this race in particular.

“I think coming off of how bad last year was for me in the race, it made this so much better. That’s what this place is all about, highs and lows, and it brings that out of you.”

The Andretti family has just one win in the race – by Mario, in 1969 – with Marco’s 2006 heartbreak still burning strong in the mind for the series veteran.

Andretti, who hasn’t tasted victory in the series since 2011, was well aware of the pressure that will be amplified come race day as he chases the biggest win of them all.

“I definitely do not wake up and think about what people say about me. That’s for sure,” Andretti said.

“It’s days like today that helps those cases, I suppose. I could look you straight in the eye and say it doesn’t affect me one bit.

“When you struggle, it makes is all worth it when you’re able to have days like today. Yeah, I mean, it’s been brutal. I’m a competitor. I don’t want to not win races, not be on the podiums.

“I don’t know, we’re just wired to not quit, man. I love this sport. I’m going to keep doing whatever you can do for it and to try to be successful at it.”