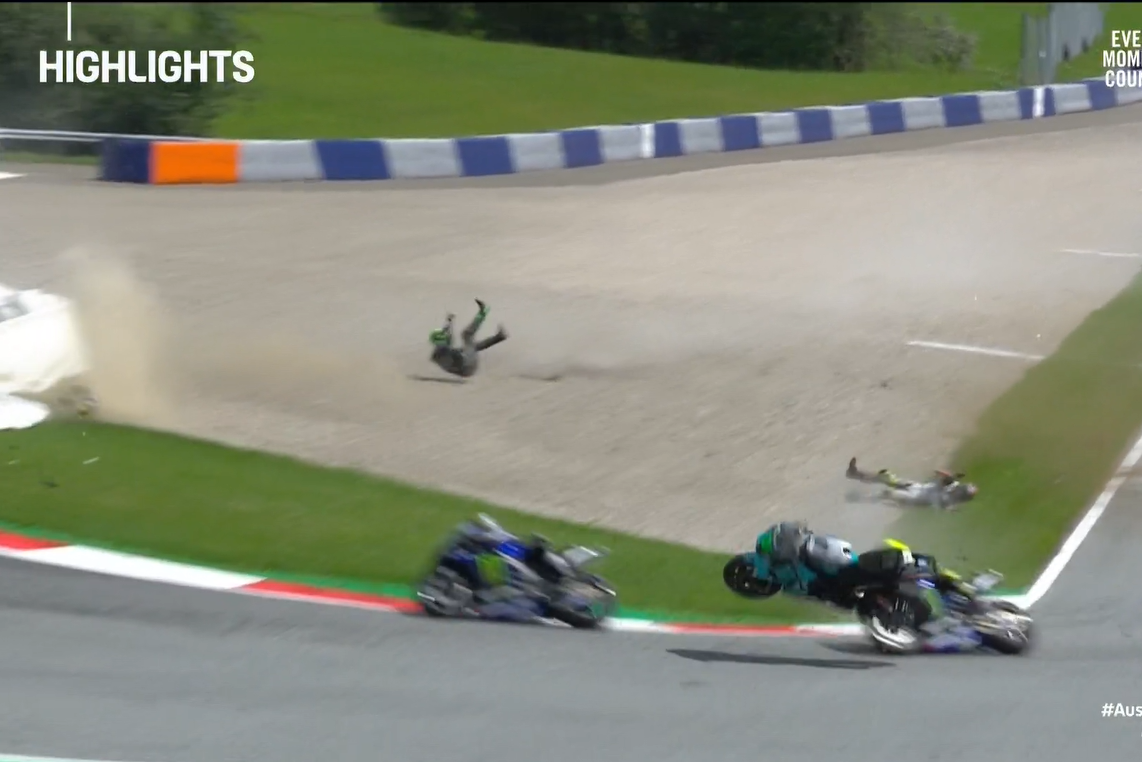 Andrea Dovizioso won and Jack Miller finished third in an Austrian MotoGP marred by the second extremely frightening crash of the day at the Red Bull Ring.

After Hafizh Syahrin ploughed into Enea Bastiniani’s stricken bike in the Moto2 race, Valentino Rossi and his Monster Energy Yamaha team-mate Maverick Viñales barely escaped being hit by out of control motorcycles on Lap 9 of the main event.

Johann Zarco’s Ducati speared through the infield air fence before bouncing over Viñales at Turn 3, while Franco Morbidelli’s Petronas SRT Yamaha just split the gap between the factory-entered M1s.

The incident began with a coming-together back down the hill, when Zarco (Esponsorama Racing) appeared to drift right at the Turn 2 kink as he battled with Morbidelli for eighth position, causing contact which took both off their bikes.

Morbidelli was initially carried away from the scene on a stretcher but ultimately walked to the waiting medical vehicle while Zarco hitched a ride back to the paddock on a scooter.

The drama continued in the 20 laps which were run after the red flag, including crashes for Alex Rins while leading and the man who led before the stoppage, Pol Espargaro.

Dovizioso, whose impending split from the Ducati Team was announced by his manager just a day earlier, took the lead on Lap 10 of part two of the race and did not look back.

Miller (Pramac Racing) led early on and for several more laps after the restart but came up two corners short of finishing runner-up in the dry for the first time when he let Suzuki Ecstar’s Joan Mir through.

Last-start winner Brad Binder rode his factory Red Bull KTM to fourth from a qualifying position of 17th and Rossi took fifth, while championship leader Fabio Quartararo got back to eighth after running his Petronas SRT Yamaha through the gravel on Lap 6.

When the race got underway for the first time, Miller took a clear lead to the first corner from the middle of the front row while Dovizioso, Pol Espargaro (Red Bull KTM Factory Racing), and Mir quickly disposed of Viñales to take up second through fourth.

Pol Espargaro blazed past Dovizioso between Turns 8 and 9 on Lap 4, then relieved Miller of the lead at Turn 9 on Lap 6.

As that was going on, Quartararo had just been relegated to seventh before running long and into the kitty litter at Turn 4.

Dovizioso got by Miller for second at Turn 9 on Lap 8 as Pol Espargaro stretched his lead to half a second, just before the horror show at Turn 3.

Pol Espargaro got the jump but Miller went deep into Turn 1, ran wide, and still managed to emerge with top spot.

The KTM rider briefly reclaimed the lead but was usurped by Dovizioso on Lap 2 of ‘Race 2’, and ceded third to Rins on Lap 6.

Miller got out to 1.2s clear at one point but, with soft tyres front and rear, would gradually be reeled back in by Dovizioso.

The Italian passed the Australian at the start of Lap 10 and Rins also overtook #43 before they got back around to the main straight.

Rins went down the inside of Dovizioso at Turn 6 on Lap 11 but, as he was completing the pass, lost the front end of his Suzuki and was out of the race.

Miller somehow stuck with Dovizioso, who was on the medium compound Michelin front and soft rear, but Mir was catching the Ducatis.

Dovizioso started to pull away in the final half-dozen laps and was a second to the good with three laps to go.

It looked, however, like Miller would be able to hold Mir out, only for the Pramac man’s defensive line into the final complex of corners to turn into a wide berth out of Turn 9 which allowed the #36 Suzuki through.

Dovizioso’s first win of the season, and third in his last four starts at the Red Bull Ring, moves him to second in the championship, 11 points behind Quartararo.

Viñales was swamped at Turn 3 on the restart lap and dropped as far back as 20th before finishing 10th.

Pol Espargaro crashed on Lap 9 and took another KTM rider in Oliveira with him, making for a total of five DNFs.

The fifth round of the premier class season also takes place at the Red Bull Ring, from this coming Friday.