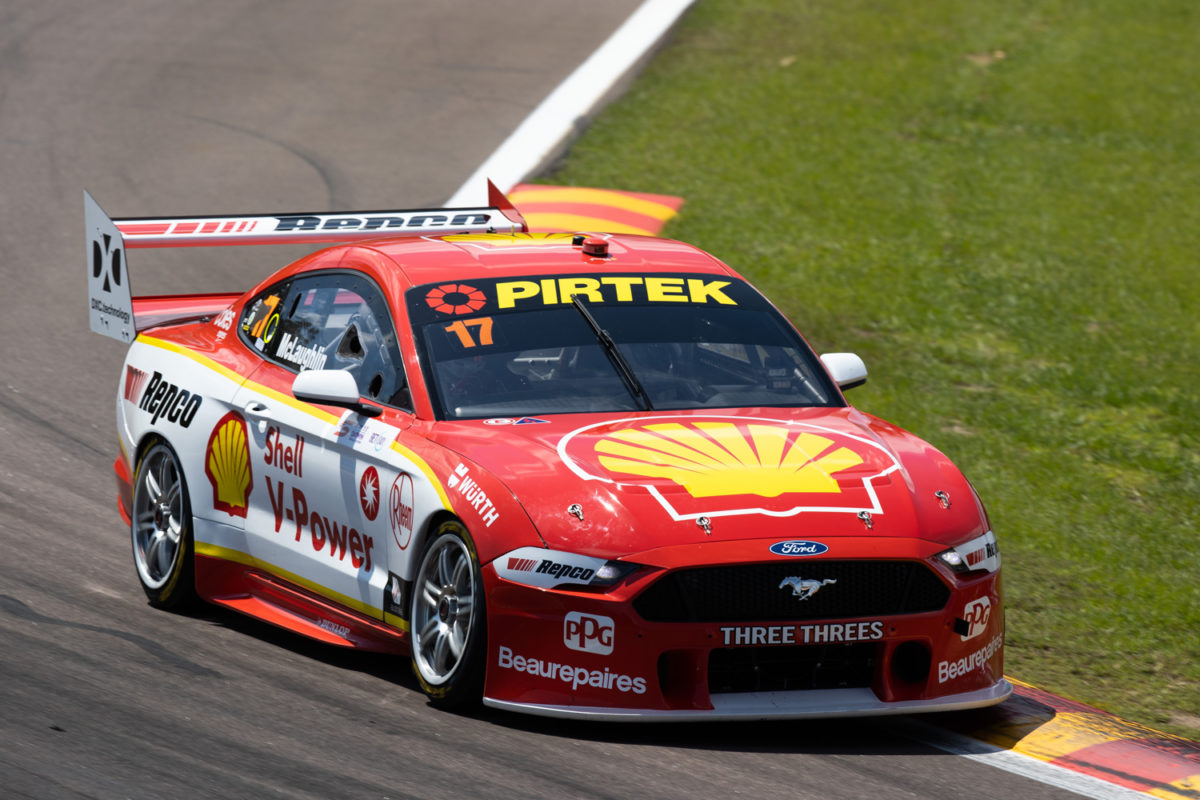 Scott McLaughlin has completed a sweep of the pole positions at the BetEasy Darwin Triple Crown by qualifying fastest for both Races 14 and 15 of the Supercars Championship.

The championship leader and Fabian Coulthard made for a Shell V-Power Racing Team lockout of the front row for the first of the afternoon’s 38-lap races at Hidden Valley Raceway, with Race 13 winner Anton De Pasquale putting the #99 Penrite ZB Commodore third on the grid for Race 14.

McLaughlin set a 1:06.3093s in the second 10-minute session of the day, which he topped by just over three tenths of a second, and will be joined at the head of the Race 15 grid by the Red Bull Holden Racing Team’s Jamie Whincup.

The latter’s team-mate, Shane van Gisbergen, is set to start just behind them in that encounter.

“It’s the first half of the payback for the guys,” said McLaughlin, who was classified 20th after incurring a penalty in Race 13.

“We’ve got a great front row lockout for Shell V-Power Racing in the first race and if we can get two wins or two good podium results today, it would be fantastic.

“I was kicking myself after yesterday; I was pretty disappointed last night going to bed but knew I had the time to repay.”

Qualifying for Race 14 was effectively decided by single-lap runs at the end of the piece after 22 drivers had initially rolled out on the hard compound tyre.

Mark Winterbottom started his second run early and despite having traffic throughout his hot lap, his rivals all stepped aside and the four-time Hidden Valley race winner was able to drive the #18 Irwin Tools ZB Commodore to a 1:06.8958s.

The time stood as fastest only until the rest of the field started completing their soft tyre flyers, with McLaughlin (#17 Mustang) laying down a 1:06.4155s and Coulthard (#12 Mustang) breaking the beam just 0.0256s slower in the other DJR Team Penske entry.

De Pasquale was third-quickest with a 1:06.6764s despite using six of his soft tyres on his way to victory the day before, ahead of Whincup (#88 ZB Commodore) and Nick Percat (#8 R&J Batteries ZB Commodore).

The second 10-minute session of the day had a slightly different rhythm, with only eight drivers venturing onto the circuit in the first six minutes.

Rick Kelly was fastest of those who went for early runs with a 1:06.8587s in the #15 Castrol Mustang on soft compound tyres.

When rest of the flyers came, all on soft tyres, McLaughlin and Whincup virtually matched each other to the first sector but 0.3265s separated them at the control line.

Van Gisbergen was another 0.1048s further back, a whisker quicker than Mostert.

Cameron Waters (#6 Monster Energy Mustang) and Coulthard will share the third row while Kelly ended up seventh having not gone out again.

The rest of the top 10 was De Pasquale, his team-mate Reynolds, and Percat.

Race 14 of the Virgin Australia Supercars Championship is scheduled to start at 13:20 local time/13:50 AEST.