McLaughlin eases to victory in Race 14

McLaughlin eases to victory in Race 14 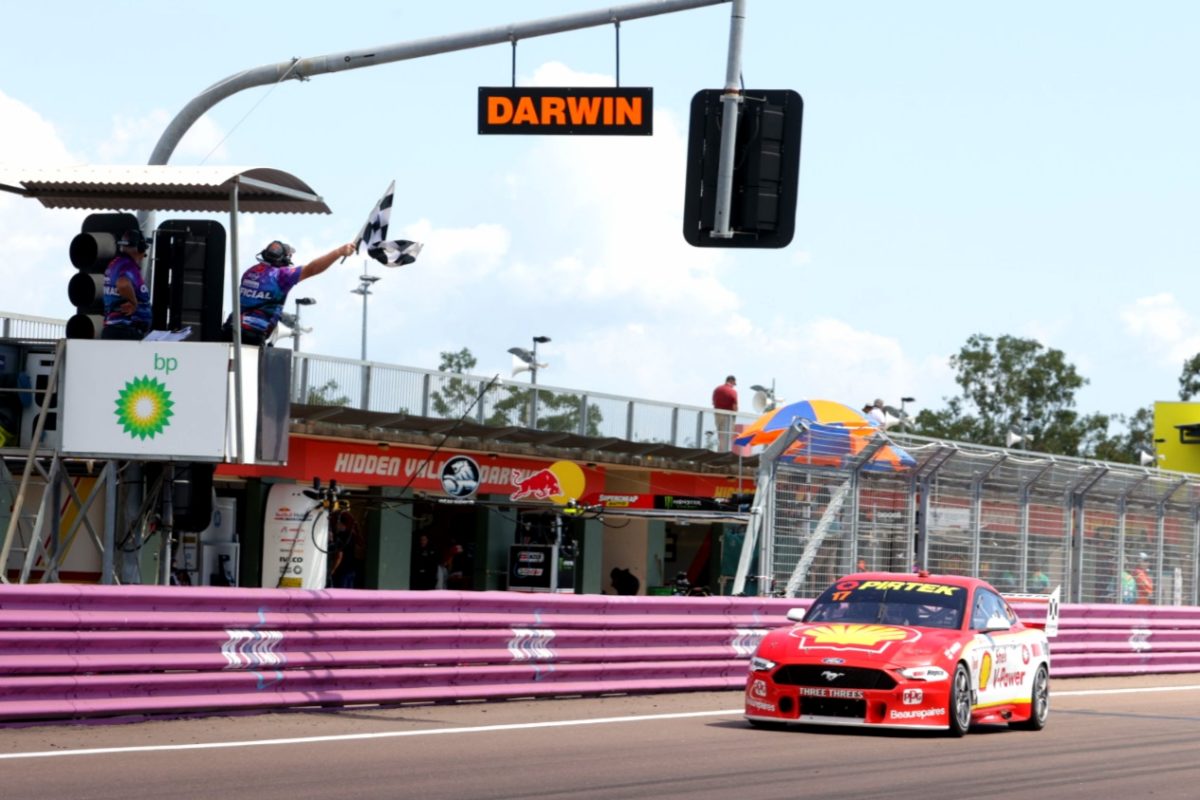 Scott McLaughlin eased to victory in Supercars Championship Race 14 at the BetEasy Darwin Triple Crown after taking the effective lead in an early pit stop.

While either of the Shell V-Power Racing Team Mustangs effectively headed all 38 laps around Hidden Valley Raceway, early leader Fabian Coulthard gifted second position to the Red Bull Holden Racing Team’s Jamie Whincup when he ran onto the grass on Lap 8.

Whincup was indeed ultimately the runner-up and Coulthard third, ahead of the second RBHRT car of Shane van Gisbergen, who staved off Penrite Racing’s David Reynolds in the latter stages.

When the lights went out, it was the outside starters who made better getaways at the pointy end of the field.

Coulthard bettered team-mate and pole-sitter McLaughlin while Whincup (#88 ZB Commodore) took up third position from fourth on the grid despite a touch from the man he started alongside, Anton De Pasquale, at the first corner.

Nick Percat (#8 R&J Batteries ZB Commodore) emerged fifth from the opening corners while Andre Heimgartner (Ned Mustang) eventually wrested sixth from van Gisbergen (#97 ZB Commodore) as they got into file exiting Turn 7, before the Triple Eight driver reclaimed the position from #7 on Lap 3.

The top 18 had started on soft tyres, including De Pasquale despite running that compound on the #99 ZB Commodore throughout Race 13, and so it was that the Penrite Racing driver was defensive to Percat in the early stages.

It was still a few tenths separating #99 and #8 when they followed Whincup into pit lane at the end of Lap 5 and while all three swapped two soft tyres, Percat jumped De Pasquale and also made up time on Whincup.

Coulthard brought his Mustang in a lap later from a lead of around 0.6s over the sister #17 entry and, unlike Whincup’s case, the DJR Team Penske crew changed the working side rubber on #12.

McLaughlin was called in next time around, also for right-hand side tyres, and a quick in-lap helped him to emerge ahead of Coulthard.

As he did so, Coulthard pinched the inside front at Turn 1 and ran off, ceding the effective second position to Whincup.

Van Gisbergen was in the nominal lead by then but pitted at the end of Lap 8 for another pair of soft rear tyres on the rear of Car #97, exiting the lane next to Percat before filing in behind the Brad Jones Racing car.

Coulthard pressured Whincup in a bid to re-take that spot but gradually dropped back from Car #88, while van Gisbergen stayed in touch with Percat.

Reynolds (#9 ZB Commodore) ran a long opening stint and was last to make his compulsory pit stop after 28 laps, at which time McLaughlin finally moved into the official lead with a touch over four seconds on Whincup after being about 4.5s up on #88 for much of the period since he took service.

Van Gisbergen took fourth from Percat with a straightforward pass at Turn 1 on Lap 30, before Percat and Reynolds appeared to barely avoid contact through Turns 2, 3, and 4 as the Erebus driver tried to capitalise.

Up the road, Whincup was eating into McLaughlin’s advantage but never looked a serious threat and the DJR Team Penske driver took the chequered flag with a margin of 1.4085s.

“It’s awesome, the first time for us in Pirtek Victory Lane,” said McLaughlin.

“I was a bit bummed I didn’t get to have a chance here yesterday but it was my own mistake so sorry to the guys for yesterday. I’m glad we could bounce back.

“It was a great start with Fabs. It was the best start I’ve done for a long time and he absolutely smashed me.

“A big in-lap on the way in, the boys’ pit stop was amazing, got in front, and then I saw Fabs run wide.

“I got a bit lucky there but overall I’m really proud. Two cars on the podium for Shell V-Power Racing; it’s ideal.”

Coulthard remained third, van Gisbergen held out Reynolds for fourth, and Percat finished sixth with a gaggle of cars behind him.

McLaughlin’s lead over Whincup in the Virgin Australia Supercars Championship standings is now 109 points while De Pasquale heads the event points in the chase for the Darwin Triple Crown title.