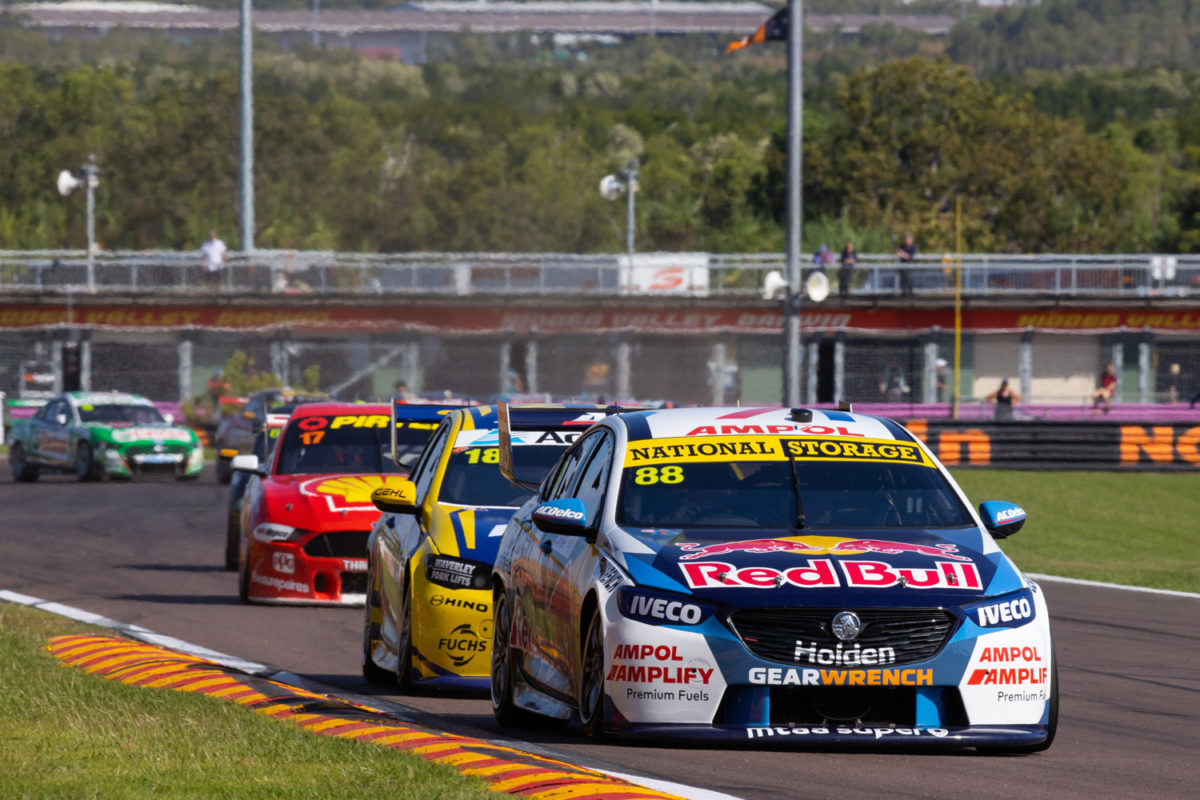 Being classified 17th in Race 13 at the BetEasy Darwin Triple Crown hurt Jamie Whincup even more given his car was the best it had been “for a long time”.

Whincup took the chequered flag in third position but was demoted in the official classification due to a 15-second penalty hanging over his head.

The sanction arose from an unsafe pit release which saw him clatter into the side of Anton De Pasquale before merging behind the eventual race winner.

Whincup had in fact led for the first two laps of the Hidden Valley opener having put the #88 Red Bull Holden Racing Team entry onto the front row of the grid after a crash in practice.

“What a crazy day,” he remarked.

“We often say there’s never a dull moment in motorsport and today was a prime example of why that statement is so true.

“I struggled with the rear of my car all through practice and the lesson learnt was I probably should have backed it off a little until we fixed the issue, especially considering the short turn around between sessions these days.

“The crew did an incredible job with limited numbers to get my car back out in qualifying, let alone qualify on the front row.

“I couldn’t have asked for much more as far as my pace went in the race, it’s the most performance we have had for a long time which makes it hurt much more when you don’t get a result.

“Unfortunately in pit lane, we were watching Fabian (Coulthard) the whole time as he was in the danger zone to block me in, but this distracted us and we touched Anton as we were merging into the fast lane.

“Considering the contact was so small and I did manage to stop and fall in behind Anton, I didn’t think I would get a penalty, but at the same time I fully respect the officials’ call – our fault and we will work on doing a better job moving forward.”

Triple Eight Race Engineering’s Team Manager, Mark Dutton, accepted fault for the incident having been the one who released Whincup into the fast lane.

“I had a shocker there,” he admitted.

“(I) Saw Coulthard pull up (but) didn’t see (De) Pasquale behind him, released Jamie, then turned around to service #97, and put him into the side of Pasquale, so all on me.

“I shouldn’t have stuffed up; I should have done better. It’s not good enough.”

Shane van Gisbergen finished 11th in the other Triple Eight car after copping a drive-through for ‘avoidable contact’ with Nick Percat on Lap 1.

He, too, had a day of drama having believed “there is something moving in the back” of his #97 ZB Commodore during opening practice.

“It was a pretty frustrating day today in Darwin,” lamented van Gisbergen.

“Pretty much all day we had issues with the car which made it a tough battle out there, so we’ve really got to work hard to get those issues sorted before a pretty intense day tomorrow.

“I didn’t drive my best today either – really frustrating.

“As they say, tomorrow’s a new day. Hopefully we find something with the car that improves the performance and use tomorrow’s two races to redeem ourselves.”

Adding to Triple Eight’s disappointment, it also incurred multiple fines for breaches of regulations during practice and qualifying.