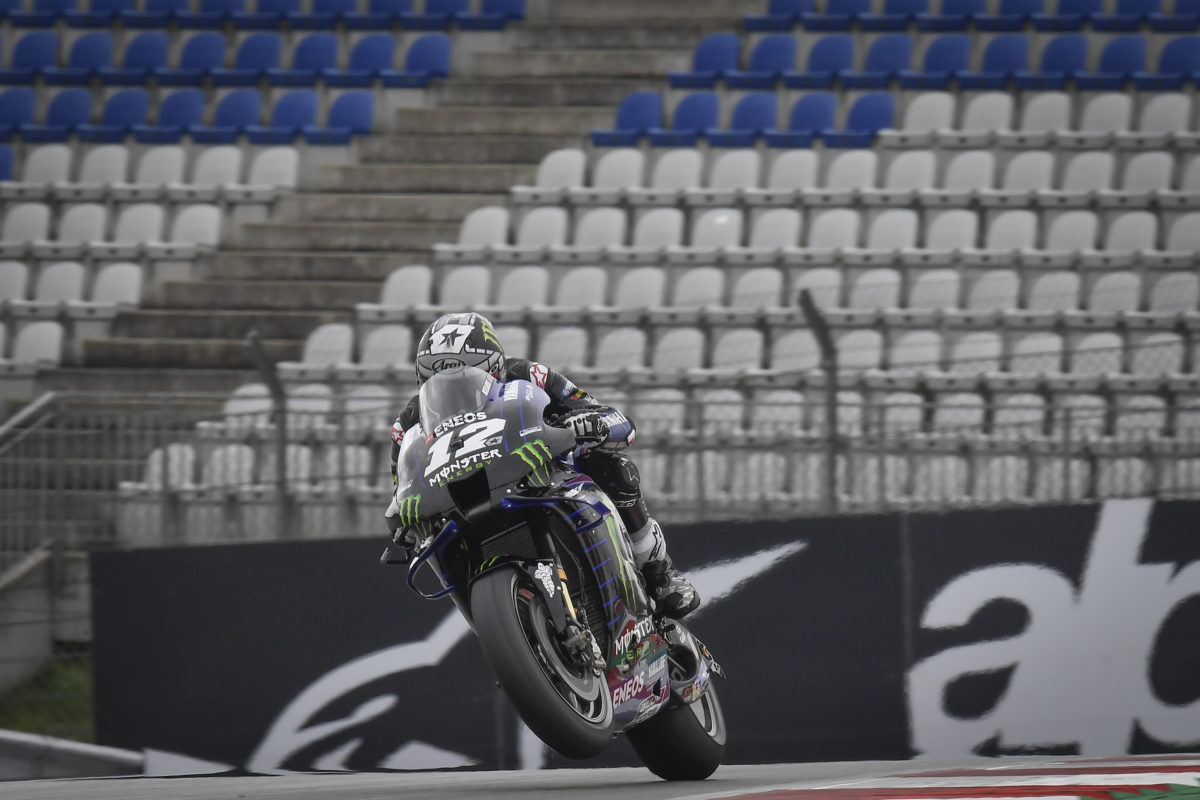 Maverick Viñales has qualified on pole for the Austrian MotoGP while Jack Miller claimed second on the grid right at the end of proceedings.

Miller bettered the Monster Energy Yamaha rider by 0.025s to the third sector on his final flyer around the Red Bull Ring but came up 0.068s short of the 1:23.450s benchmark at the finish line.

The Pramac Ducati pilot will therefore start from between Viñales and championship leader Fabio Quartararo with the latter having clocked a best of 1:23.537s on his Petronas SRT Yamaha.

Quartararo was quickest through the first flyers in Qualifying 2 but it was Viñales on top once everyone returned to the pits with a 1:23.694s on his #12 M1.

The factory Yamaha rider moved the marker to a 1:23.643s at the start of his second run before SRT’s Franco Morbidelli jumped from 10th to third, bumping Suzuki Ecstar’s Joan Mir off a provisional front row with a 1:23.810s.

Andrea Dovizioso, whose exit from the Ducati Team at season’s end has now been confirmed, then took over the lead with a 1:23.618s on #04.

Viñales improved again on his second flyer of the run in putting in that 1:23.450s shortly after, before Quartararo reclaimed second spot with a 1:23.537s.

With the chequered flag almost about to be flown, Red Bull KTM Factory Racing’s Pol Espargaro moved into third on a 1:23.612s only for Dovizioso to take the place back moments later by getting down to a 1:23.606s.

Pol Espargaro and Miller were both bringing up fast sector splits on their last flyers and while the former lost pace over the course of the lap, the latter achieved a 1:23.518s.

Morbidelli was seventh all told with a best of 1:23.719s and is due to start alongside Suzuki Ecstar’s Alex Rins and last weekend’s pole-sitter, Johann Zarco (Esponsorama Ducati), who came from Qualifying 1.

The Ducati Team’s Danilo Petrucci missed Q2 by 0.024s and was incensed after the first 15-minute hit-out, apparently due to a feeling that he was baulked badly by Aleix Espargaro (Gresini Aprilia).

Petrucci is therefore set to start 13th, one position ahead of Espargaro, with Cal Crutchlow (Castrol LCR Honda) also on the fifth row.