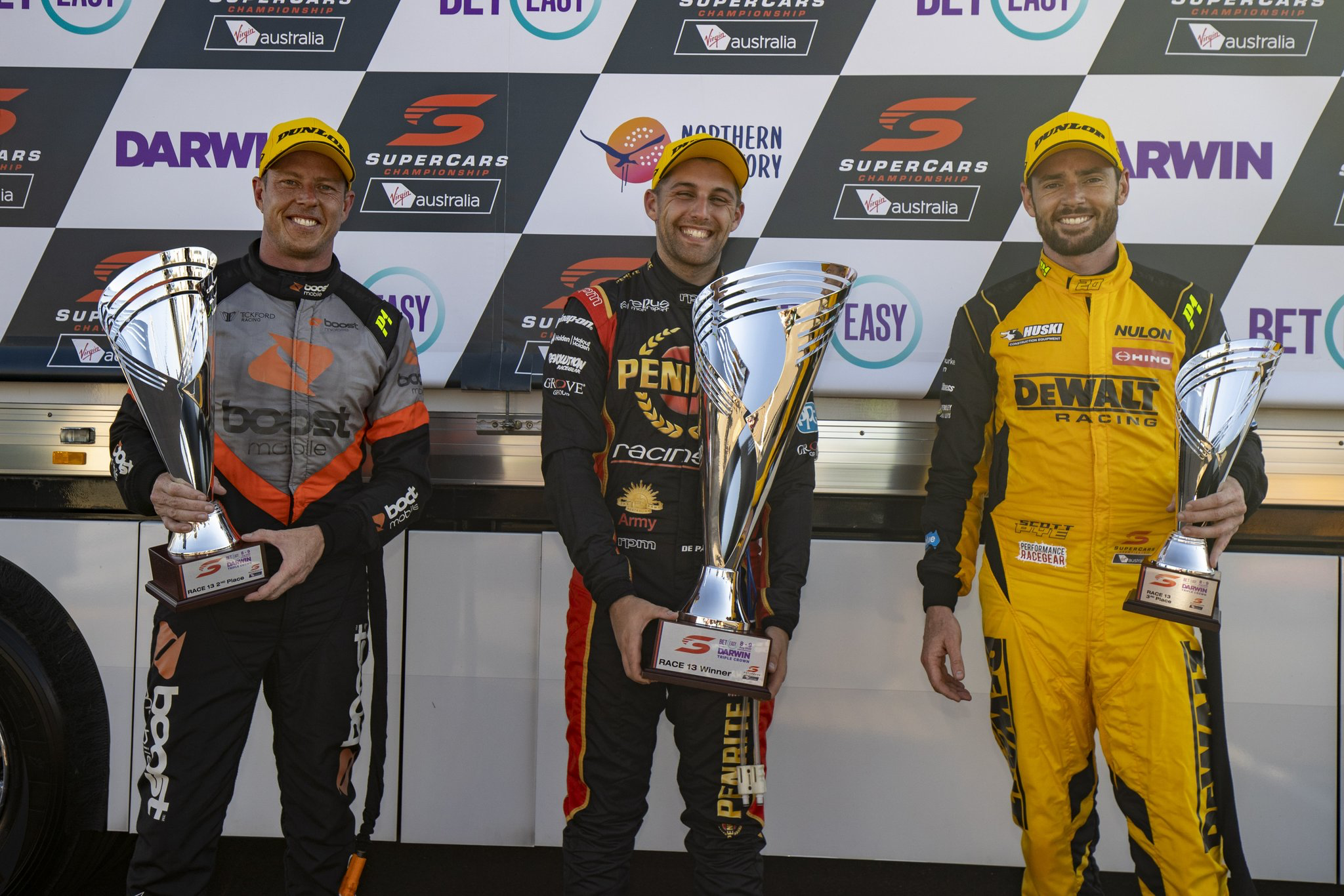 James Courtney and Scott Pye have called on Supercars to bring back traditional podium procedures after a string of muted celebrations.

Since the resumption of the Virgin Australia Supercars Championship following the coronavirus-induced break, champagne showers have been a notable omission.

Instead, the top three drivers have received their respective trophies following post-race interviews in the pit lane before returning to their teams.

Despite being his first success in the championship, De Pasquale kept his celebrations to a minimum with a smile and a thumbs up to the cameras.

De Pasquale said he would look forward to a time when he can celebrate properly.

“I’ve never been a big ‘camera on me’ kind of guy, I’ve always just focused on the next thing,” said De Pasquale.

“We will celebrate, we’re rapt but a lot of that (emotion) gets taken away because you haven’t got a podium.

“You haven’t got champagne, you can’t throw things around and stuff like that so you lose a bit. But we’ll aim for one of those in the future.”

While the 24-year-old said celebrations are typically low-key for the third-year full-timer, his fellow podium finishers Courtney and Pye sympathised that his first win didn’t have the fanfare.

For Courtney, it was his first podium finish for Tickford Racing in what was only his seventh outing with the team.

“It’s great to be back on the podium but I feel for Anton because we should be standing on podiums,” said Courtney.

“We’re here, we’re winning races, and he should be able to celebrate that way. It’s a bad call not to do it and I think it’s something we miss as a sport.

“We’ve got to show our personalities and have that way to express so I feel for Anton with that. It’s something we should look at and look to change in the future.”

“I would change it straight away,” he added.

“We’ve done it the other way for a long time and sponsors are paying big money so we’ve got to service those guys – even more so now with the economic climate and the way it is.

“I know the Boost guys would love to have seen me up on the podium and the fanfare that goes along with that. That’s my two cents’ worth.”

“It would have been awesome to see Anton get up on the roof,” said Pye.

“Maybe that’s not his style but even for us down at Team 18, that’s their first podium.

“We could only have one mechanic with us, which I understand for the COVID restrictions but it’s a bit of a bummer because we come back to the pits and we’re all shoulder to shoulder.

“We’ve been living together for the last six weeks and the podium was a weird feeling, for sure.

“Thankfully the racing is making up for it, it’s super exciting but I’d love to at least spray some champagne.

“For Anton to get that first win, it’s always nice if your crew can be there but I think we’re all going to make up for it tomorrow night, probably Monsoons.”