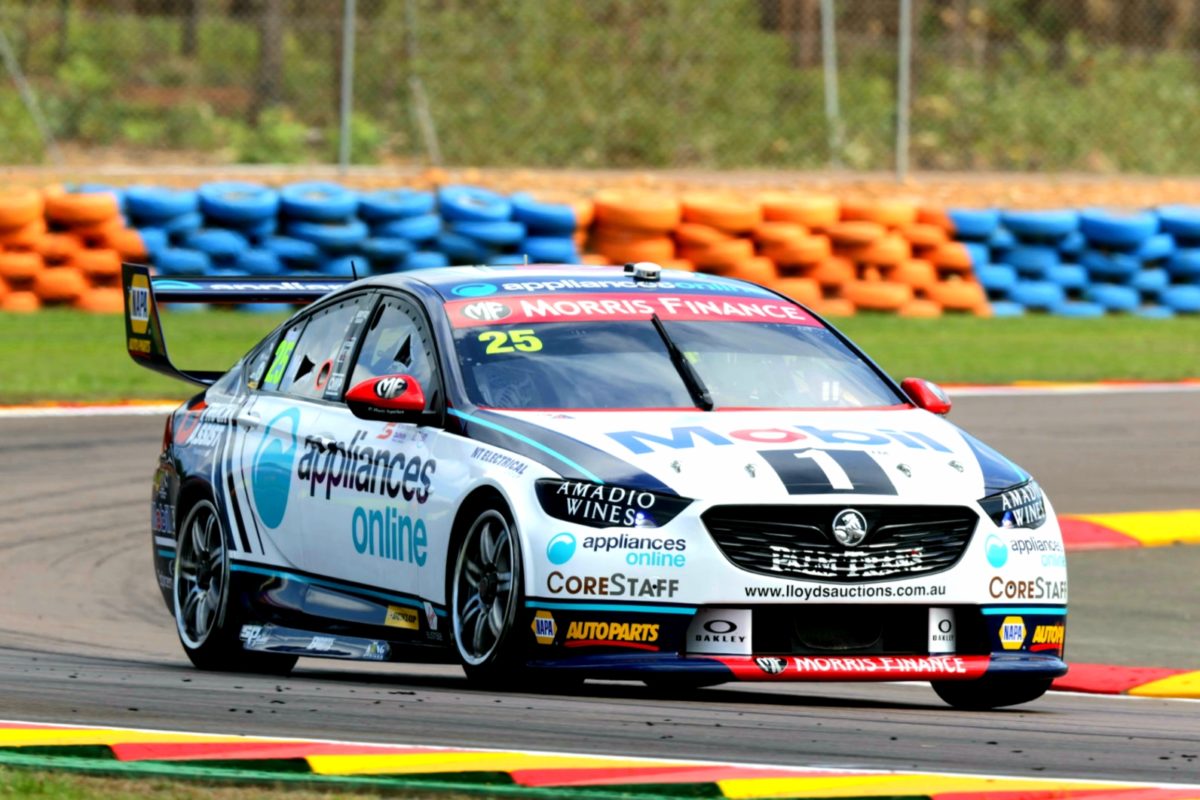 Chaz Mostert has gone fastest in opening practice at the BetEasy Darwin Triple Crown while Shane van Gisbergen was hampered by a mysterious rear end issue.

Mostert was among the last to complete the first all-in session at Hidden Valley Raceway and took top spot off long-time fast man Scott McLaughlin by laying down a 1:06.7477s in the #25 Mobil 1 Appliances Online ZB Commodore.

McLaughlin therefore ended up second with a personal best 1:07.0222s in the #17 Shell V-Power Mustang, less than half a tenth ahead of another late improver in Anton De Pasquale (#99 Penrite Racing ZB Commodore).

Van Gisbergen jumped as high as sixth having spent much of the 30-minute session at the foot of the order, but was still left unsatisfied with the feeling from his #97 Red Bull Holden ZB Commodore after ending up ninth-fastest.

The 2016 champion’s fastest lap came after Triple Eight Race Engineering reportedly checked the transaxle and changed the rear shock absorbers, but van Gisbergen still only completed a brief final run before stepping out of the car with around three minutes of the session remaining.

He said of those changes, “It helped the feeling and the lap time but something not quite right that I’m comfortable with in the rear.

“Turn 2 and 3, I’m full-wheeling the thing where it should be easy flat so hopefully we can fix it and find something.

“With these short sessions, you’re better off parking it, not much time, make sure we find something and try to make it better.

“It’s obviously not too bad because we’re fast but just really something that doesn’t feel right.

“I might be exaggerating it but certainly doesn’t feel normal. Hopefully we can find something and just work away at it.”

The DJR Team Penske driver went fastest to the second sector next time around on his way to a 1:07.2025s which was still faster than all but three others had managed to that point.

Mostert was only 18th when he went and set the very best lap of the session, which included the fastest second sector.

“We tried a lot of different things we’ve been thinking about in the last couple of rounds and a couple of positive things, a couple of things we need to neaten up,” said the Walkinshaw Andretti United pilot.

“It’s good to be up at the top of the timesheets after Free Practice 1.”

As such, Coulthard ended up fifth, one spot up on David Reynolds, whose best was his first flyer in the #9 Penrite ZB Commodore of 1:07.1588s.

Todd Hazelwood was one of only three who used hard compound tyres, which were still being indicated on the timing screen when he set a 1:07.1678s late in the piece in the #14 Brut ZB Commodore.

Rounding out the top 10 were Jake Kostecki, who set the fastest first sector in the #34 Unit ZB Commodore, from van Gisbergen and Rookie Practice pace-setter Macauley Jones (#3 CoolDrive ZB Commodore).

Jamie Whincup wound up 14th in the #88 Red Bull Holden ZB Commodore and Nick Percat was last having appeared to run on hards throughout in the #8 R&J Batteries ZB Commodore.