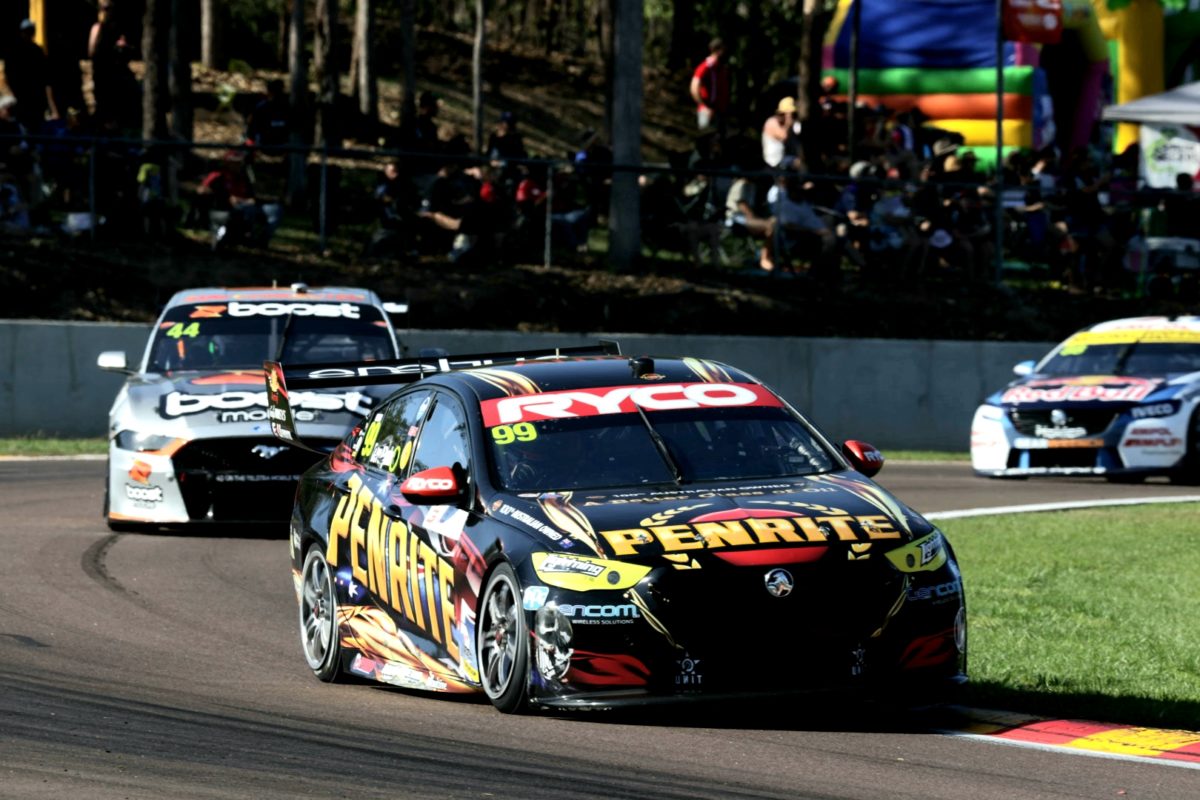 De Pasquale led home James Courtney in the latter’s third event in a Tickford Racing Mustang, while Whincup took the chequered flag in third but was officially classified 17th once he had 15 seconds added to his race time as punishment for an unsafe pit release.

McLaughlin attracted the same sanction for a Safety Car restart breach which relegated the championship leader from eighth as he crossed the Hidden Valley finish line to 20th.

Van Gisbergen drove back to 11th after a pit lane penalty for his part in a first lap incident which put Nick Percat out of the race and sent Todd Hazelwood spinning.

It was Whincup (#88 Red Bull HRT ZB Commodore) leading the field to the first corner having got the jump on pole-sitter McLaughlin (#17 Shell V-Power Mustang) from the outside of the front row.

Winterbottom (#18 Irwin Tools ZB Commodore) was fourth on the grid, highest of those starting on the soft tyre compound, and took up third by going the long way around Turn 1, leaving Fabian Coulthard (#12 Shell V-Power Mustang) fourth.

Carnage unfolded around the back end of the top 10 when Percat (#8 R&J Batteries ZB Commodore) speared across the track on the run towards Turn 6 and in turn took out Brad Jones Racing team-mate Hazelwood (#14 Brut ZB Commodore).

Replays showed that Percat had dropped a wheel over the edge of the race track before being unloaded by van Gisbergen (#97 ZB Commodore), hence the penalty for ‘avoidable contact’.

De Pasquale (#99 Penrite ZB Commodore), who started sixth on soft tyres, passed Coulthard for fourth at Turn 5 on Lap 2, and was given plenty of room by McLaughlin to take over third at Turn 6 on the following lap.

Meanwhile, Winterbottom had got the lead off Whincup at Turn 5 on Lap 3 and quickly pulled clear.

The Team 18 pilot was around 1.8s clear when the Safety Car was called on Lap 5 after contact from Rick Kelly (#15 Castrol Mustang) sent Jake Kostecki (#34 Unit ZB Commodore) into the tyre wall next to Turn 10/Turn 11.

Kelly had tangled with Jack Le Brocq (#55 Supercheap Auto Mustang) at Turn 7, putting both onto the infield grass, and the former would also be given a drive-through having hit the Matt Stone Racing car on re-entry.

Whincup was released into the side of De Pasquale as the Erebus driver transited the lane with what would become the race lead.

De Pasquale had remained on softs and Whincup on hards, with Courtney sitting third and still on softs, from McLaughlin on hards and Winterbottom fifth having switched to hards.

There was a kerfuffle behind the top two upon the Lap 10 restart, including McLaughlin nosing ahead of Courtney before Lap 9 was in fact over.

McLaughlin appeared to attempt a redress and dropped behind Winterbottom at Turn 1, while Courtney passed Whincup for second at Turn 6.

By the time the restart lap was out, De Pasquale was already 1.3s up on the chasing pack, as van Gisbergen’s penalty was announced.

Notification of Kelly’s followed before Race Control confirmed the 15-second time penalties for Whincup and McLaughlin.

The latter appeared to let team-mate Coulthard take over fifth spot on Lap 20 as De Pasquale stretched his advantage just beyond three seconds.

It was wiped out after Macauley Jones lost control of the #3 CoolDrive ZB Commodore and ended up in the fence between Turns 5 and 6, drawing a second Safety Car period.

De Pasquale survived the Lap 29 restart and only had six more laps to navigate given what was scheduled as a 38-lapper ran time-certain.

Courtney remained within a second of Car #99 but never seriously threatened thereafter, while Pye (#20 DeWalt ZB Commodore) charged to fourth on the road on soft tyres after making the switch under the first Safety Car.

It is Winterbottom who is credited with fourth all told, however, having staved off Pither (#22 Coca-Cola ZB Commodore), with Coulthard sixth.

Said the race winner, “We threw everything at it today, which means we’ll have a struggle tomorrow, but that’s OK when you can talk about a win.

“It paid off, we had a really good car, our car’s always good around here, so it’s good to get a result. The team’s been begging for it so it’s been awesome.”

Chaz Mostert drove his #25 Mobil 1 Appliances Online ZB Commodore, which broke a tailshaft in qualifying, from 20th on the grid to a result of seventh without having to use soft tyres.

Rounding out the top 10 were Cameron Waters (#6 Monster Energy Mustang), Andre Heimgartner (#7 Ned Mustang), and Lee Holdsworth (#5 Truck Assist Mustang), while van Gisbergen got back to 11th after taking another set of hard tyres during the second Safety Car.

The field is back on-track tomorrow at 11:40 local time/12:10 AEST for a pair of qualifying sessions ahead of Races 14 and 15 of the Virgin Australia Supercars Championship.