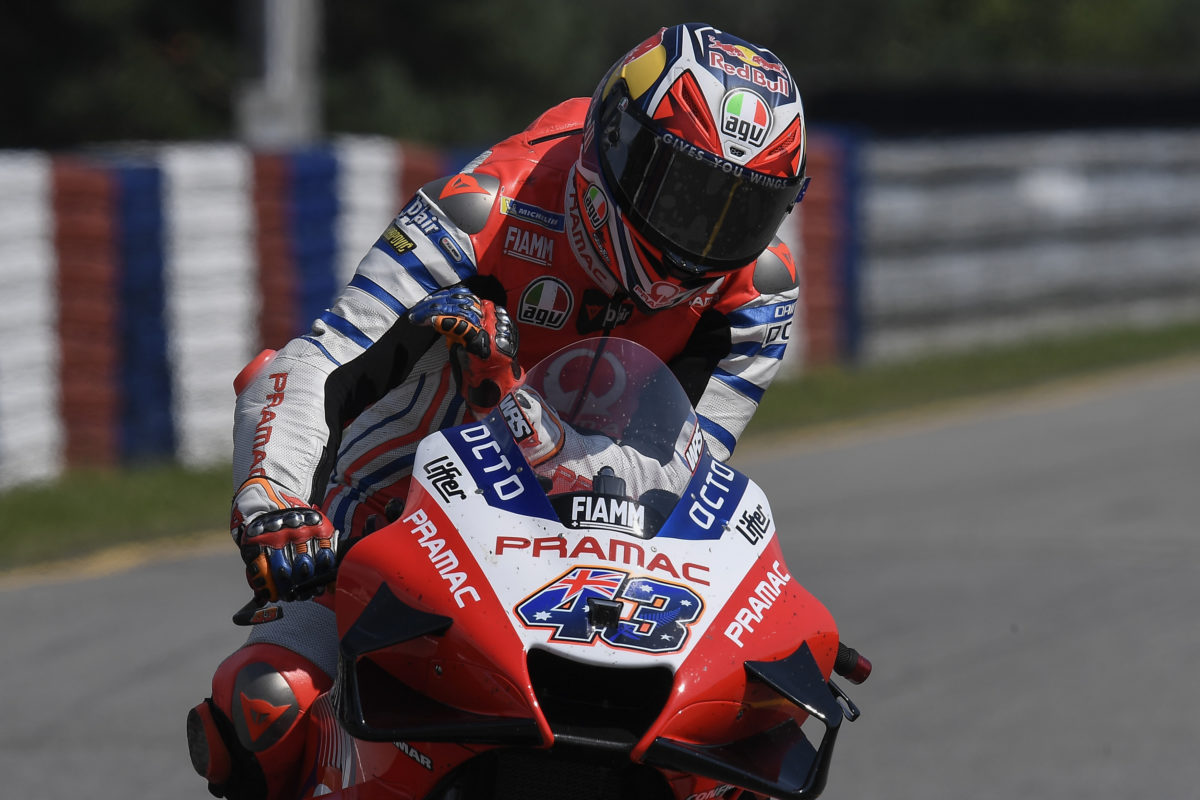 Jack Miller believes that Ducati needs to quickly get to the bottom of why most of its riders performed so badly in the Czech MotoGP.

While Avintia Racing’s Johann Zarco finished third from pole position on a Desmosedici GP19, Miller’s ninth in Sunday’s 21-lap race was the best of those on the current-specification Ducati.

The factory Ducati Team’s Andrea Dovizioso finished 11th after qualifying a disastrous 18th and his team-mate Danilo Petrucci ended up 12th after earning eighth on the grid, while Pramac Racing’s Francesco Bagnaia was out after Friday practice.

Miller only rode his Pramac entry into the top 10 on Lap 18, the first time a GP20 had been there since Petrucci was overtaken by Takaaki Nakagami on Lap 3, having started 14th after failing to progress from Qualifying 1.

The Australian described the situation as “a real head-scratcher” in his post-race column, especially considering he finished third at Brno last year, one position behind Dovizioso.

He reasons it is imperative that Ducati figures out its issues promptly given the Czech Republic Grand Prix is followed immediately by two rounds at Austria’s Red Bull Ring.

“There’s not a lot to say after that one, because there weren’t a heap of positives,” wrote Miller.

“Maybe that’s a bit harsh… finishing inside the top 10 in the end was actually alright, because I spent more of the race in 12th than anywhere else.

“I managed to pick up three spots in the last four laps and got Aleix (Espargaro, Gresini Aprilia) for ninth on the last lap, so I salvaged something from it at least.

“But I’ll be honest, I’m glad that weekend is over.

“We have a lot to understand from this weekend, whether our struggles were track-specific and a one-off, and we need to do that quickly because we have Austria coming up in less than a week. But it was a weekend to forget.”

Brno was considered a far more suitable circuit for the Ducatis than Jerez, which hosted the first two rounds of 2020.

Miller highlighted a lack of rear grip as a key problem, even if he had hopes of a reasonable showing despite a lacklustre Friday.

“I was pretty confident I would get a good grid spot for the race after a so-so Friday, but Saturday started badly and ended up worse with me back in 14th on the grid,” he added.

“It’s a long while since I’ve been back that far, six or seven races before the end of last season, and the day just never came to me.

“In FP3 the rear brake was bent so that didn’t work, and then in qualifying I couldn’t get the tyre to last, the wear was just so high. Not my most wonderful day, let’s say.

“This year’s Ducati is clearly better than last year’s but the rear tyre for me just shook everywhere, the bike was fishtailing all the way up the straight.

“It was a catch-22; you couldn’t be too aggressive with the tyre, but our bike needs to be ridden aggressively to get a lap time out of it. So, completely nowhere.”

Miller is now ninth in the championship on 20 points, with Dovizioso fourth on 31 and Zarco up to sixth on 28.