Verstappen upsets the Mercedes at Silverstone

Verstappen upsets the Mercedes at Silverstone 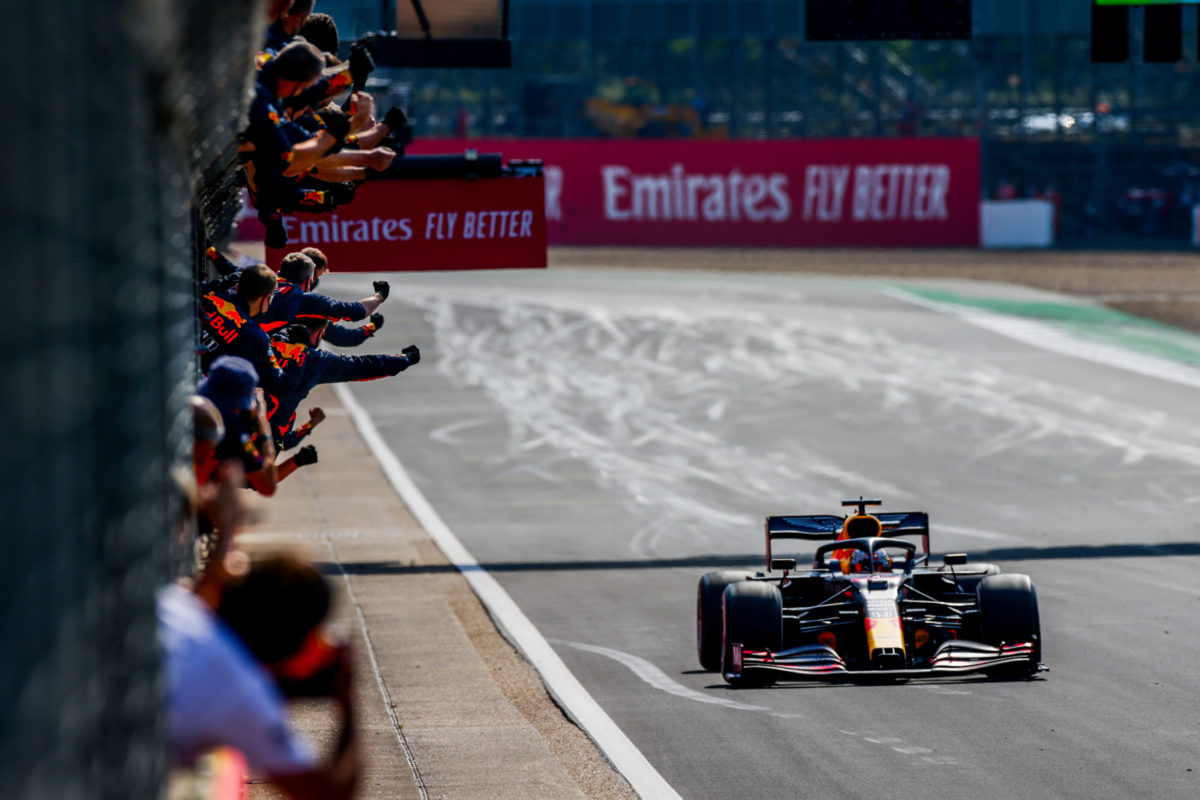 Max Verstappen has won the 70th Anniversary Formula 1 Grand Prix with strategy variation and better tyre life than the Mercedes.

The Red Bull Racing driver inherited the lead by running relatively long on the hard compound tyres on which he started the race and was in the box seat thereafter.

Lewis Hamilton finished 11.3s back in second position having passed Mercedes team-mate Valtteri Bottas on the third-last of 52 laps around Silverstone.

Hamilton looked to have been on a one-stop strategy and/or seeking to take advantage of a potential Safety Car which never came before pitting a second time from the official race lead with 11 laps remaining.

Scuderia Ferrari’s Charles Leclerc, however, did make the one-stopper work by finishing fourth, ahead of Red Bull’s Alexander Albon and the Racing Points of Lance Stroll and Nico Hulkenberg.

Daniel Ricciardo was first off the lead lap in 14th with a spin and three pit stops over the journey in his Renault.

Bottas had led the field into Abbey for the first time from pole position, ahead of Hamilton, Verstappen, Hulkenberg, Ricciardo, and Stroll, with five of those six on medium compound tyres.

Sebastian Vettel spun on his own at the first corner having grabbed a lot of the kerb as he ran inside of Albon, putting the Ferrari last from an already lowly 11th on the grid.

Ricciardo got caught wide through the Loop on Lap 1 and ceded fifth to Stroll, while Bottas retained the lead despite Hamilton getting close into Brooklands, moments later.

Bottas kept himself just outside of DRS range once the second lap passed, while Verstappen drove back within one second of Hamilton on Lap 11.

The Red Bull pilot had caught the second placed Mercedes a lap later, and was still just behind #44 when #77 pitted from a lead of 2.3s at the end of Lap 13 to replace their mediums with hards.

Hamilton made the same change a lap later and rejoined sixth, two spots behind Bottas, but got past Leclerc with DRS at Stowe on his out lap.

That meant they were on the same compound as Verstappen had started on but the Dutchman was still quicker than the Mercedes, which were chewing through their rears, even as he went past the Lap 20 mark in his opening stint.

Verstappen was a pit stop up on Hamilton on Lap 24 and filed into the lane to take mediums on Lap 26 with around 19.5s on Bottas.

The Red Bull crew was slightly slow changing the right-rear of Car #33 and it re-entered the race track just behind the #77 Mercedes of Bottas, but Verstappen picked off the Finn at Brooklands/Luffield almost immediately and was quickly beyond DRS range.

He was soon told to push and Bottas appeared to respond in kind, before both pitted at just over two seconds apart on Lap 33 and each took another set of hards.

Hamilton was still far enough ahead that he would retain the lead with a Safety Car stop, and Verstappen was told to go after the Brit again inside the final dozen laps.

The effective race leader had closed to 7.8s behind Hamilton when the championship leader did take another set of hard tyres at the end of Lap 41 and rejoined fourth.

The stop put the #44 Mercedes over six seconds behind Leclerc, who had only pitted the one time to change from mediums to hards on Lap 19.

Hamilton made light work of that gap and squeezed past the Ferrari at Stowe on Lap 45, leaving him just over seven laps to overturn a five-second deficit to Bottas.

Fresher tyres would allow him to do so with a DRS move on the run to Brooklands on Lap 50, but Verstappen was gone by then on his way to a first win of the season.

The result puts the Red Bull driver second in the drivers’ championship, 30 points behind Hamilton but four points up on Bottas, who got home in third.

Leclerc’s fourth represented a net gain of four positions from his starting berth, as did fifth for a strong-finishing Albon.

Hulkenberg had run an effective fifth from the start until he dropped to seventh, one position behind team-mate Stroll, with a third pit stop to take soft tyres on Lap 44 and did not make up any ground thereafter.

Rounding out the top 10 were the second of the one-stoppers in Esteban Ocon (Renault), Lando Norris (McLaren), and Daniil Kvyat (AlphaTauri).

Pierre Gasly (AlphaTauri) wound up 11th and Vettel only got back to 12th, with Carlos Sainz (McLaren) 13th.

Ricciardo had not long made a second pit stop when he spun at Village as Sainz moved to round him up on Lap 31.

That forced a third stop for the Australian, onto used mediums, and he eventually made the chequered flag nine spots behind where he started, in 14th.