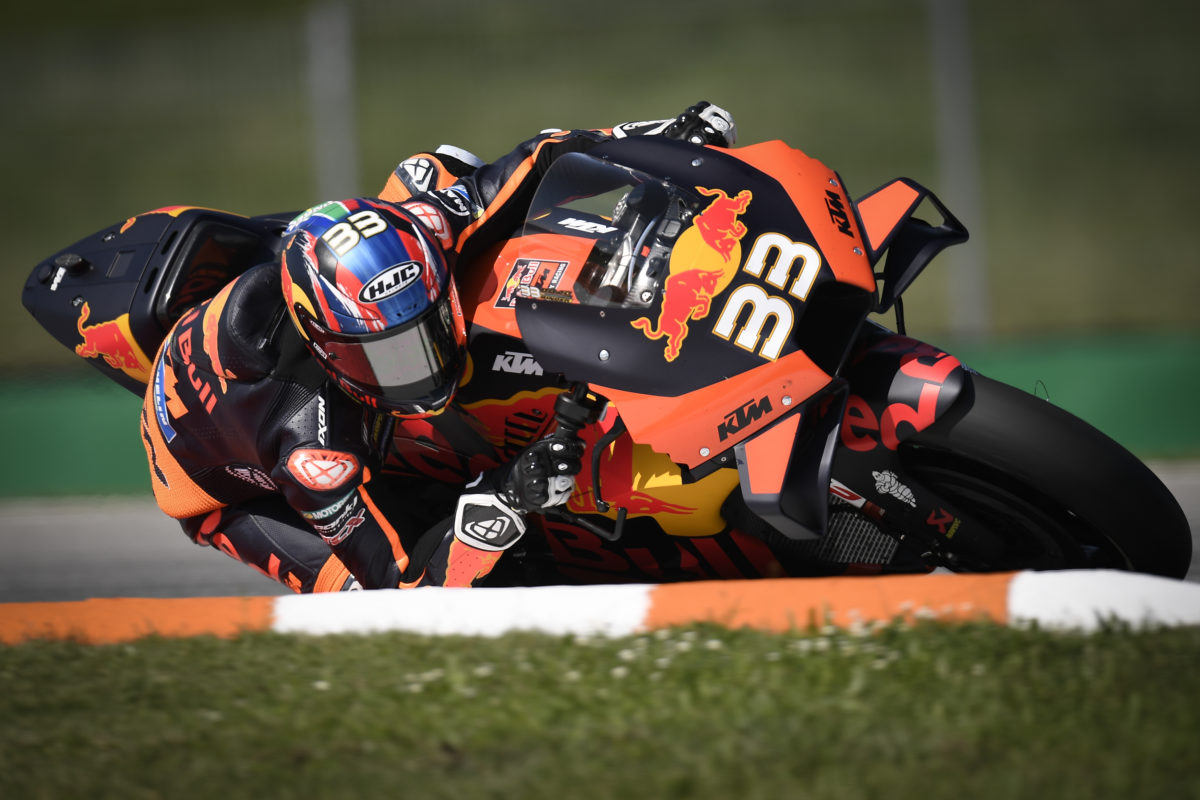 The South African caught and passed Franco Morbidelli, who had led on his Petronas SRT Yamaha since the exit of the first corner, on Lap 13 before going on to take victory by 5.266s.

Pole-sitter Johann Zarco (Esponsorama Ducati) clung on to the final podium place despite a long lap penalty along the way and final lap pressure from a still injured Alex Rins (Suzuki Ecstar).

Quartararo led the field into the first corner from the middle of the front row but ran wide and ceded the lead to team-mate Morbidelli.

Aleix Espargaro made a strong launch from the second row to take up third before diving under Quartararo at Turn 4.

As that was going on, Zarco dropped to sixth, behind the factory KTMs of Pol Espargaro and Binder.

Morbidelli established a lead of 1.0s after one lap, by which time Maverick Viñales (Monster Energy Yamaha) had already slid back to eighth from a second row start.

Aleix Espargaro ran wide at the start of Lap 2 and handed second spot back to Quartararo, before Binder mugged Pol Espargaro for fourth at Turn 3, a move which helped Zarco to also move up to fifth.

Binder had also moved ahead of the other Espargaro by the end of the Lap 2, before the Aprilia rider was overtaken by both Zarco and brother Pol on Lap 3.

Quartararo soon found himself under pressure from Binder, who eventually executed the pass at Turn 3 on Lap 9, with Morbidelli then almost 1.5s up the road.

It took four more laps for the 2016 Moto3 champion to catch the Italian and move into first position at Turn 10.

Binder did not look back, starting the final lap with a 4.4s advantage and going on to seal a famous victory which was also the first for a South African, while Morbidelli clinched a maiden podium.

Behind, however, the battle was on for the final podium place and beyond.

Pol Espargaro could not make a move on Zarco stick at Turn 3 on Lap 5, but pulled it off exactly a lap later to take up fourth position.

The outgoing KTM rider, like his current team-mate, also got by a clearly struggling Quartararo on Lap 9, but quickly handed third position back when he ran well wide of the line at Turn 13.

The Spaniard cut back but Zarco was trying to go through and the contact which ensued put the #44 Red Bull KTM on the floor and out of the race.

Zarco passed Quartararo a lap later, also at Turn 1, and managed to just retain third spot when he made a committed tour through the long lap penalty lane on Lap 14 as punishment for what was deemed ‘irresponsible riding’ on Lap 10.

Quartararo nearly suffered a similar fate when he could not get turned in at Turn 10 on Lap 16 and got a lighter touch from Rins.

The Frenchman stayed upright but was easy pickings on Lap 17 for the Suzuki rider and Rossi, with that trio going on to finish fifth through seventh.

Ducati Team duo Andrea Dovizioso and Danilo Petrucci ended up 11th and 12th respectively on a day when only Zarco really flew the flag for the Bologna marque.

Cal Crutchlow (Castrol LCR Honda) took 13th, Viñales slumped to 14th, and Alex Marquez got the final point from last on the grid on his Repsol Honda.

In addition to Pol Espargaro, Joan Mir (Suzuki Ecstar) and Iker Lecuona (Red Bull KTM Tech3) were retirements after the latter took out the former early in the race.

With Viñales finishing so far back, Quartararo’s championship lead is an increased 17 points, while his future team-mate holds on to second spot in the title race.

The Austrian MotoGP takes place at the Red Bull Ring next weekend (August 14-16).