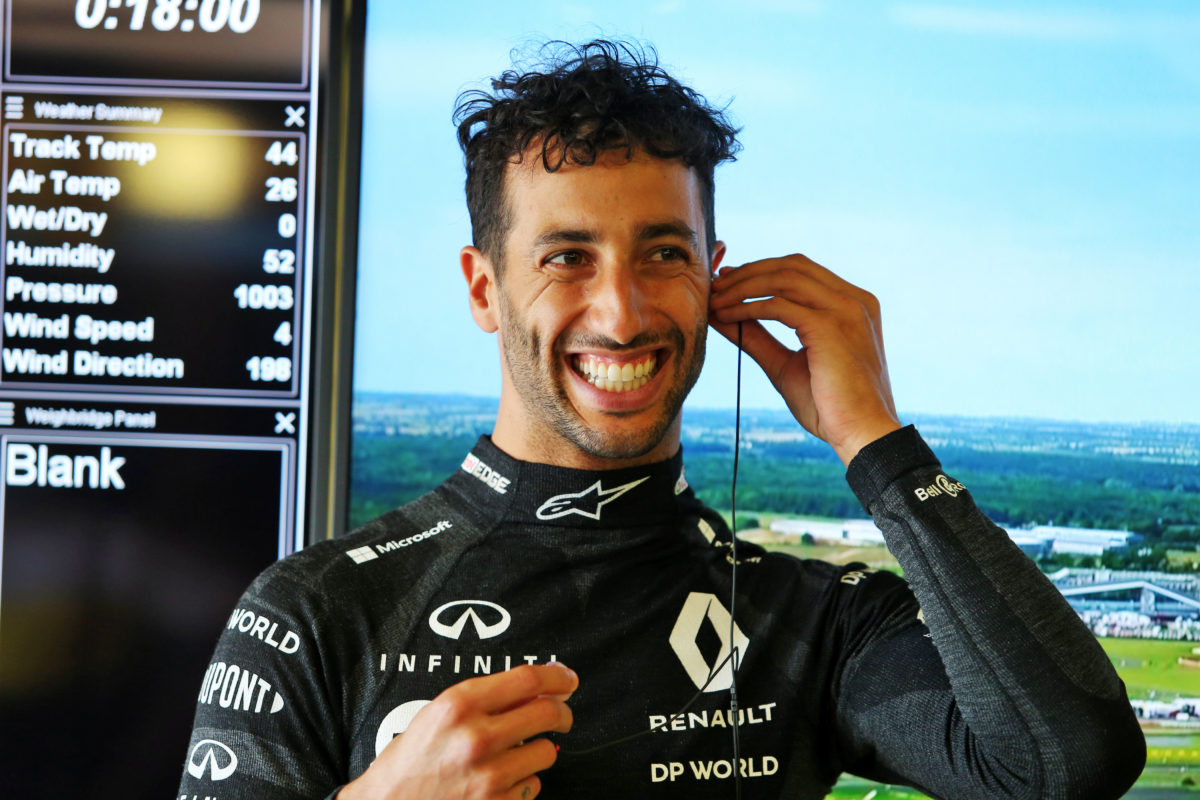 Daniel Ricciardo felt “stoked” after maximising the performance from his Renault to qualify fifth for the 70th Anniversary Grand Prix.

The Australian was third until the final moments of Qualifying 3 at Silverstone when he was usurped by Racing Point sub Nico Hulkenberg and Red Bull Racing’s Max Verstappen.

While more than a second away from either Mercedes, Ricciardo was ultimately only 0.215s shy of the head of Row 2 on the grid, having been what he claimed was a “genuine” third-quickest in Friday practice.

“It was good,” he told Sky Sports F1 after qualifying.

“I think everyone was a bit surprised with P3 yesterday, and in a way there was probably a little bit of pressure on the team to deliver that again.

“I don’t think anyone expected P3 but they expected probably somewhere around where we are now, so to do it, P5, I’m stoked.

“Pretty much every lap that session when I crossed the line, I was like, ‘Exhale’, and I felt I got the most out of it really, every lap, so it was a satisfying session.”

Asked to explain why his R.S.20 is apparently so much better than the R.S.19, Ricciardo cited rear downforce which allows him to open the throttle earlier.

He noted, however, that there had also been significant improvement even on the first Silverstone grand prix a week earlier.

“The rear of the car is definitely working better,” said Ricciardo.

“I don’t know what part of the car it is which is the real reason, but basically we’re able to get on the power earlier, you can feel that the downforce is there and it’s working.

“To be a tenth off Max, we’re obviously very happy with that; there’s a lot of progress there.

“I think we were about eighth tenths or something (actually 0.684s in Q3) off him last week.”

Ricciardo was also something of an outlier in the final phase of qualifying in running on medium compound tyres throughout.

Ultimate pole-sitter Valtteri Bottas and his Mercedes team-mate Lewis Hamilton set their fastest laps after a switch from mediums to softs, while Verstappen went the opposite way before laying down his personal best, and Hulkenberg remained on the red hoops.

“I put the soft on in Q1 and I felt I did a good lap in the first run,” recounted the Renault driver.

“Then, Q2, the first run, I put the medium on and I was like, I don’t know, a second quicker or something, and it felt easier as well. I think the car was happier with that tyre, so from that point, I was set on the medium.”

Esteban Ocon qualified 11th in the other R.S.20 but is provisionally set to start from 14th after being penalised for impeding Williams’ George Russell.