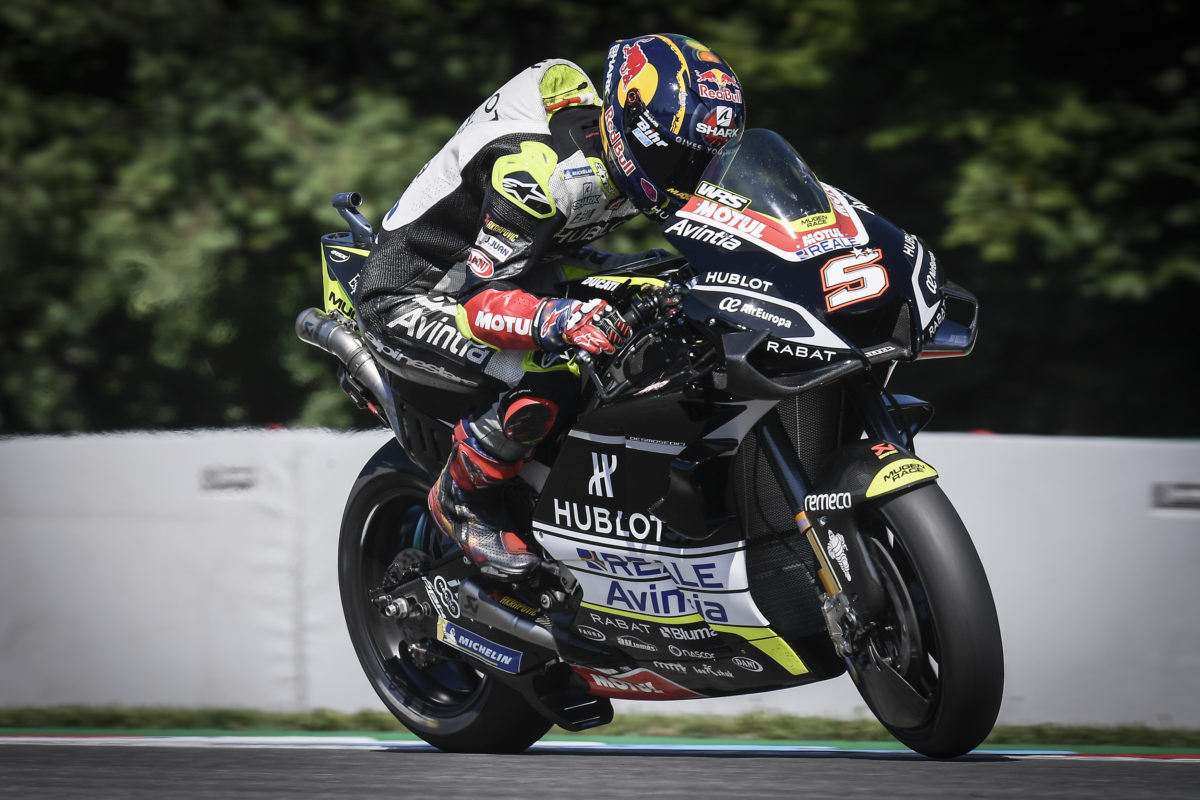 Johann Zarco has put his year-old Esponsorama Ducati on pole position for the Czech MotoGP while Fabio Quartararo was second-quickest in qualifying despite a late crash.

Quartararo was still half a threat to take top spot away from his fellow Frenchman when he lost the front end of his Petronas SRT Yamaha at the penultimate corner with the chequered flag out.

The championship leader had still done enough by then to put #20 on the middle of the front row at Brno, next to his team-mate, Franco Morbidelli.

Pol Espargaro (Red Bull KTM Factory Racing) set the second-fastest time of the session only for it to be deleted given it was set with yellow flags out, most likely for a Cal Crutchlow (Castrol LCR Honda) spill.

He will instead start sixth, behind Aleix Espargaro (Gresini Aprilia) and Maverick Viñales (Monster Energy Yamaha).

Jack Miller missed out on Qualifying 2 altogether and is set to start from 14th on his Pramac Ducati, while factory counterpart Andrea Dovizioso is four positions worse off again.

Quartararo started off with a 1:55.990s, the fastest lap of the weekend to that point, while Aleix Espargaro was second at the end of the first runs having set a 1:56.074s on his second flyer while following the #20 Yamaha.

That unlikely effort knocked brother Pol Espargaro back to third in the lull, ahead of the other Yamaha pilots, namely Viñales, Morbidelli, and Valentino Rossi, respectively.

Viñales went for a two-stop strategy and edged up to third spot with a 1:56.131s on his second run but would not have enough time to complete a lap on his third.

Quartararo had just enough time to start one last flyer before the chequered flag and was 0.191s slower than Zarco to the third sector before crashing.

As such, it was Zarco topping Q2 by just over three tenths of a second, ahead of Quartararo and Morbidelli.

The latter’s team-mate, Takaaki Nakagami, was on top of Qualifying 1 with a 1:56.290s when word came through after the chequered flag had been unfurled that his fastest lap had been deleted for a breach of track limits.

The penalty put Binder into the top two for the session and the #30 Idemitsu LCR Honda entry back to 17th all told.

Miller was in the cut at the end of the first runs but could not improve on his initial 1:56.352s on his second run and fell to 14th position on the grid.

The Ducati Team’s Dovizioso never looked like progressing and would end up almost three quarters of a second away from the top two in the stanza.

The Repsol Hondas will bring up the rear of what is a 21-bike field after the withdrawal of Francesco Bagnaia (Pramac Ducati), with Marc Marquez’s injury replacement in Stefan Bradl edging Alex Marquez.