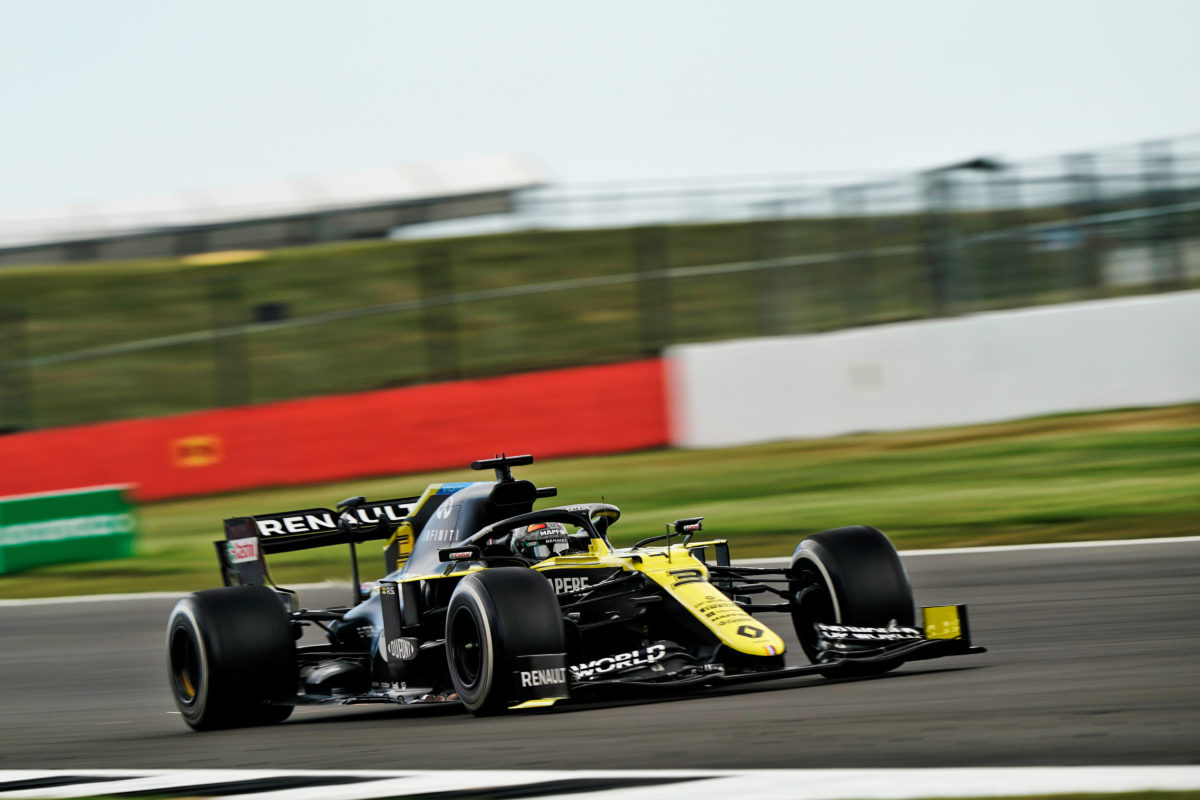 Daniel Ricciardo believes that he is an outside chance for a podium in the 70th Anniversary Grand Prix at Silverstone after being a “genuine” third-fastest in Friday practice.

The Renault driver ended the second 90-minute session as best of the rest at 0.815s off the pace of Lewis Hamilton and 0.639s away from the other Mercedes of Valtteri Bottas.

Ricciardo had only been 17th in Practice 1 in what he described as “a bit of a throwaway session” when his team was “doing a bit of testing”, before clocking his fastest lap on the soft compound tyres in Practice 2.

“It was good,” remarked the West Australian.

“We got out there, I did another run on the hard and that was a really good run and then found a good bit, a chunk, on the soft as well, so it was nice.

“But it’s nice. Even though this is just practice, for sure this makes everyone feel good. It’s better having a day in P3 than a day in P16 or something, so we’re definitely going to take it.”

Ricciardo finished fourth in a dramatic conclusion to the British Grand Prix at the same circuit last weekend.

Asked about his chances of matching his Friday practice result in this Sunday’s race, he said, “If we do what we did this afternoon, then yeah.

“And I think that was genuine for the track conditions. We did a few changes through the session, and I really felt a big step with one of the changes we made, and I was like, ‘This is a pretty good race car right now.’

“So, I think we can hang in there. We’ll see. If we’re here in quali, I think that would still exceed what probably our expectation is now, but I think we can still do a very good job.”

The 2014 Silverstone podium finisher also cautioned that a change in weather conditions on Saturday could shake up the order.

“The big thing is tomorrow, the wind is changing 180 degrees by the looks of it, and it’s going to pick up,” said Ricciardo.

“People at home will go, so what? But that is going to change the balance and the cars a lot.

“So, I think tomorrow there might be a different story and there’ll be a few other things going on, but we certainly put ourselves in a good place today.”

Additionally, Ricciardo expects that the soft compound tyre, a step softer than that in use last weekend, will be used sparingly for the balance of the weekend.

“Yeah, the soft is…it’s an interesting tyre. Interesting. That’s probably the best way to put it,” he commented.

“I was surprised that it held on for most of the lap. I don’t think many people are going to want to do much with that tyre for the rest of the weekend, or at least when it counts.

“I think even Lewis and Valtteri did a bit of a compare and Lewis had had a bit more time on the medium than the soft. So, yeah, I think that’s probably where that’s going to go.

“But that’s cool you know; throw another spanner in the works.”