This week the 17-year-old drove the car that Broc Feeney took to the Super3 Series title in 2019 at Queensland Raceway.

Super2 Series competitors Brodie Kostecki (Eggleston Motorsport) and Feeney (Tickford Racing) were on hand to coach Morris through the test.

It’s been a berth by fire of sorts for Morris, who only began circuit racing a little over a year ago in a Hyundai Excel. 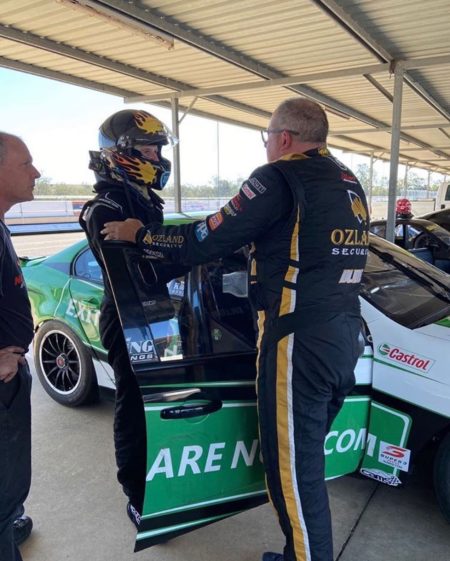 Prior to that, Morris had only one karting event under his belt and a handful of speedway races to boot.

“Initially I just thought it would be something fun to get into,” Morris told Speedcafe.com.

“I was just sitting at home playing video games all day and thought ‘I need to do something,’ so I just decided to go racing.

“I think only a year and a month ago I had my first race at QR in an Excel.

“I haven’t been racing that long but I’ve been trying to do as much racing as possible at the moment just to get experience. I’m a bit far behind compared to everyone else.”

Morris began the test in a Toyota 86 before climbing aboard the Supercar.

“The first few laps I was a bit amazed by it,” said Morris.

“Once you get up to speed you don’t have time to worry about how fast you’re going, you just worry about braking and getting the car stopped.

“The first few laps I was a bit overwhelmed but then I got into the rhythm.”

Morris said he has future ambitions to race in the Super3 Series but will continue to race in the Hyundai Excel Series and Toyota Gazoo Racing Australia 86 Series in the meantime.

If he doesn’t drive in the Supercars feeder series, he said he hopes he can work with a team in the future.

Paul Morris said he was pleasantly surprised by the lap time the youngster showed.

“He did a pretty solid job,” said Morris.

“He went better than I thought he’d go. We slotted him in and he did four- and five-lap runs and he got down to a high 1:12s and at the same time Broc was doing low 1:12s, tyre for tyre.

“He’s within the same second of what Broc did. The lap time is there now, he just needs the tidying up under brakes.

“For his first outing, it couldn’t have gone any better.” Driver coach Brodie Kostecki said he buoyed by the pace shown by Morris.

“He surprised all of us a bit,” said Kostecki.

“In the end, we worked out that being around Norwell quite often he’s quite smart with picking things up quickly.

“He applied everything we told him to during the day. I’m really happy with how he finished the day.”

Kostecki was particularly impressed with Morris’ ability to adapt to the powerful Supercar despite his inexperience.

“It’s always quite difficult trying to bring someone from a low horsepower car to a high horsepower car, you have to drive the cars completely different,” Kostecki added.

“He’s been racing Excels, which are front-wheel-drive but he does a lot of driver training at Norwell with either Broc or myself or even Anton (De Pasquale).

“Paul has done a good job of giving us the reins to train him up and also have fun with it at the same time.”

Morris’ next outing is expected to be at the NTI Townsville SuperSprint on August 29-30 where he’ll compete in the Hyundai Excel Series.