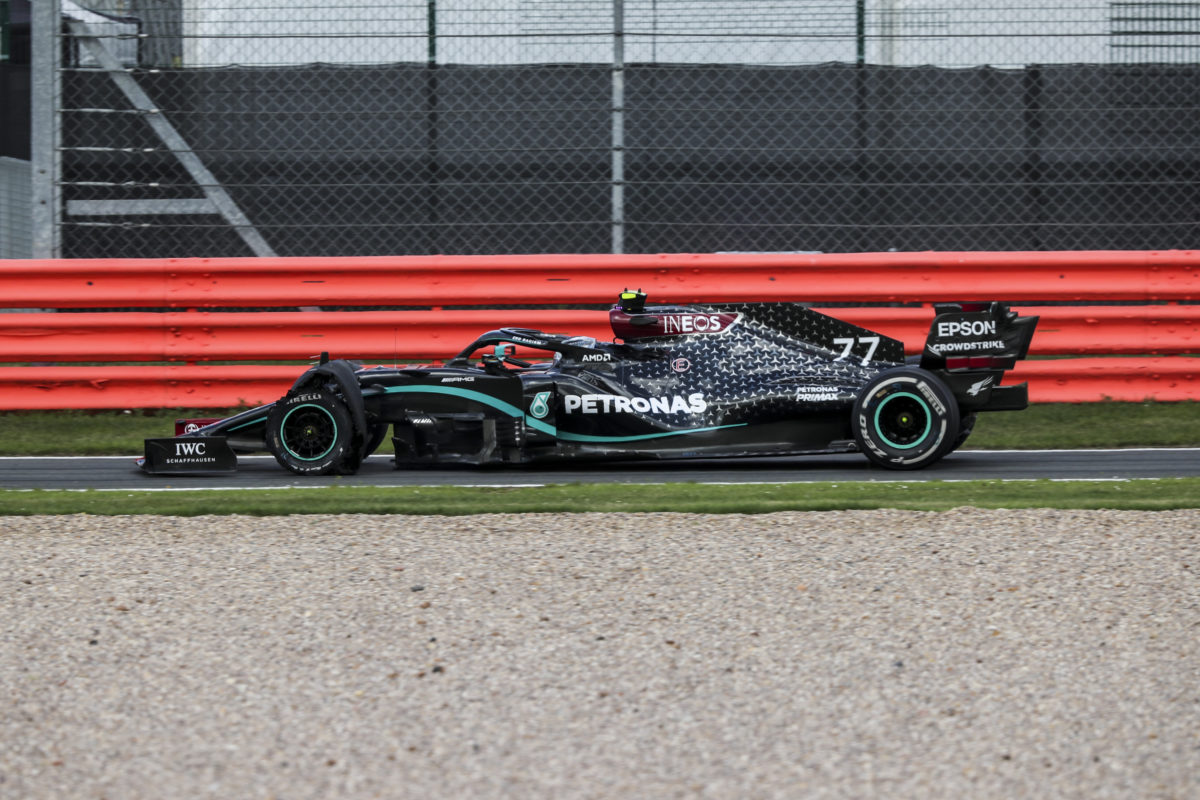 Both Valtteri Bottas and Lewis Hamilton experienced failures, the former with three laps to go and the latter midway around the final tour.

Hamilton was able to hang on to his advantage out front after second placed Max Verstappen stopped on the penultimate lap, though it was a close run thing.

Much of the field had opted to take a one-stop strategy following the deployment of the Safety Car early in the race for Daniil Kvyat.

That necessitated a long run on the hard compound tyres, and while a two-stop strategy was theoretically possible, Mercedes’ Motorsport Strategy Director, James Vowles, has revealed it was never a viable option.

“If we go back to qualifying it’s important for everyone to understated that both ourselves and also Verstappen lost some of our tyres due to cuts and gravel,” he explained.

“In the case of Valtteri, his rear right tyre from his run on medium was damaged sufficiently that we weren’t allowed to run it during the race, so we had to take a tyre out of his second medium allocation.

“In the case of Lewis who spun, all four of those tyres were unusable, so as we went into the race a two stop was very compromised.

“The fastest two stop would be a medium, hard, medium, but now we didn’t really have a strong enough set of mediums in the case of Valtteri, in the case of Lewis we didn’t have that tyre set available.”

Vowles admitted there were discussions on the pit wall about the prospect of switching to a two-stop strategy late in the race, but it was deemed an unnecessary risk.

“In all of the models it was incredibly difficult to catch back up to Verstappen, let alone overtake him,” he explained.

“We had no concerns in terms of tyre durability as we were running in the race,” Vowles added.

“There was no indication from any of our systems that there was going to be a failure, so you would rarely stop your car and put it behind a competitor’s on a whim unless you were guaranteed that two stop would work.”

The failure on Bottas’ car was instantaneous, with the team receiving no warning beyond the vibrations the Finn had reported – and engineers had witnessed on the data.

There were no such vibrations for Hamilton, who responded to Bottas’ fate by reducing his own pace in the closing laps.

Heading into the final lap the team remained confident that Hamilton’s tyres would hold up.

“In the case of could we have done things differently, with Lewis undoubtedly,” Vowles conceded.

“There was an opportunity to stop the car. It had happened on the very last lap of the race. If we had stopped prior to that we would have given the win to Verstappen.

“If he had stayed out and we had stopped and dropped behind I’m fairly sure Red Bull would have stayed out.

“Furthermore, Red Bull stopping, which was for fundamentally the fastest lap reason as well as perhaps consideration of the tyre durability cost them the race win on Sunday.

“As we sit here now we should have brought that car in.

“The reason why we didn’t was the car was 30 seconds up the road, Lewis was already driving many seconds off the pace, and all he needed to do was to do the last lap of the race in the middle of the road.

“Driving around one more lap out there in the middle of the road, up to 15 seconds off the pace if we wanted to, can sometimes be a safer proposition.

“Clearly as we stand here now that was a mistake and one that could have cost us dearly.”

Vowles also moved to confirm the failures were not related to Mercedes’ dual axis steering system.

“I can categorically say the answer is no,” he responded to questions asking if DAS contributed towards the failures.

“There’s’ a few reasons behind that; first of all it wasn’t used for any time really towards the element of failure.

“In fact it was really used towards the early stages of the race and that’s it.

“Next, (Carlos) Sainz also experienced a failure and clearly they’re not running a DAS system on their car, and a number of the competitors complained of the vibration that Valtteri was.

“This wasn’t contained to us but clearly we were on the worst side of this problem.”

Mercedes still chalked up victory in the event with Hamilton though Bottas fell from second to 11th after limping his car around an entire lap after his failure occurred just past pit entry.

Formula 1 returns to Silverstone this weekend for the 70th Anniversary Grand Prix, where one step softer tyres will be in play.