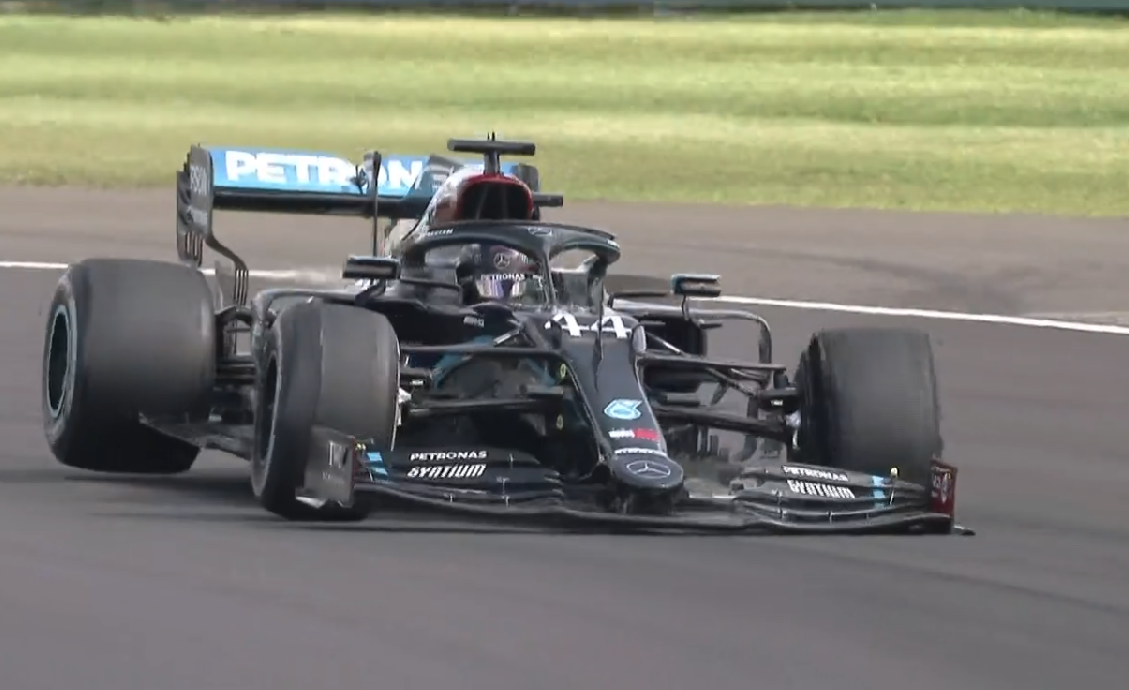 Lewis Hamilton dragged his Mercedes across the line with just three inflated tyres to win the Formula 1 British Grand Prix in dramatic fashion.

Hamilton led throughout from Bottas before the Finn suffered tyre failure on Lap 50 of the 52 lap encounter.

Having sat in a lonely third place, Verstappen took over second before immediately pitting for a fresh set of boots as he started Lap 51.

That took the pressure off Hamilton out front, only for trouble to strike the world championship leader midway around the final lap.

The Englishman then managed to limp his Mercedes tricycle to the line as Verstappen madly gave chase, closing in the region of 25 seconds on the final tour but falling just over five seconds shy of victory.

Charles Leclerc was third for Ferrari while Daniel Ricciardo snared fourth in a dramatic finale.

It was a race book-ended by drama, the Mercedes tyres at the end and a hefty crash for Kevin Magnussen at the start of the race.

The Haas driver had made contact with Alex Albon, who’d looked to move underneath the Dane after he’d clobbered the apex kerb at the Vale right hander at the end of the opening lap.

Following the contact, Magnussen skated through the gravel trap before making heaving impact with the tyre barrier, tearing the left front from the car.

Investigated by the stewards, later in the race Albon was handed a five-second penalty for his part in the incident.

It triggered the Safety Car as the field began its second lap, Hamilton having already extended a 1.3 second advantage over Bottas.

The two Mercedes ran wheel to wheel at the start before falling line astern.

Verstappen and Leclerc squabbled briefly over third before the Red Bull secured the upper hand with Carlos Sainz dropping into fifth and Ricciardo climbing two places on the opening lap to sit sixth.

Racing resumed at the start of Lap 6, the two Mercedes immediately extending an advantage out front.

Having reporting vibrations following the impact with Magnussen, Albon pitted at the end of the first racing lap after the resumption.

Red Bull swapped his medium compound tyres for a set of the hards, rejoining more than half a minute behind the leaders as the last car on track.

A monster crash for Daniil Kvyat on Lap 12 again saw the Safety Car called, the AlphaTauri leaving the road at Maggotts.

It appeared to be a mechanical failure or a puncture, the car turning hard left as he tipped the car into the full throttle corner.

Immediately following the incident he radioed back to his team to apologise before climbing free, his frustration clear as he pushed a television camera aside.

The field immediately reacted by taking to pit lane, though the sequence failed to significantly shake up the order with the exception of Romain Grosjean, who opted not to pit.

The Haas driver was on the medium tyres, his team rolling the dice to leave him fifth behind Leclerc.

Other than Albon, who’d been in the lane shortly after the first Safety Car, he was the only driver not to take the opportunity to pit.

The Safety Car was withdrawn at the end of Lap 18, the leaders again easing clear at the front of the race.

Grosjean came immediately under pressure from Sainz as Lando Norris launched an attack on Ricciardo in a four-way scrap for fifth to eighth.

Norris got the job done around the outside of Luffield before then pulling alongside Sainz in the run into Copse, though the McLaren pair held their respective places in sixth and seventh.

Grosjean fell victim to Sainz on Lap 22 as the pair rounded Stowe, the McLaren driver moving to the inside to take the corner after a failed attempt a lap earlier.

The Frenchman was promptly under the attentions of Norris, the Englishman repeating the same move made by his team-mate two laps later.

The scuffle between Grosjean and Sainz was noted by the stewards, who issued the Frenchman a black and white flag for unsporting behaviour after he’d moved under braking on Lap 21.

Out front the race had settled into a procession with Hamilton a little more than a second over Bottas, as they’d been since the Safety Car restart.

Verstappen remained within arms’ reach, though was being slowly dropped by the leading duo while simultaneously opening a sizeable advantage over Leclerc in fourth.

On Lap 36 Ricciardo made a move at Brooklands on Grosjean to take seventh, the Haas driver again swerving in defence as the Australian dived underneath him.

“Yep, yeah that was sketchy,” Ricciardo reported following the incident, which was noted by the stewards and investigated post-race.

Half a lap later Grosjean lost another spot, this time to Stroll, at Stowe before taking to the pits to finally swap his medium compound tyres for a set of the hards.

Stroll then dropped a spot to Ocon who breezed by on the Wellington Straight courtesy of DRS.

The Canadian’s fortunes continued to slide as he dropped down the order when Pierre Gasly put a move on him as they began Lap 49.

As he began Lap 50 disaster befell Bottas as the Mercedes driver suffered a left front delamination.

He’d held down a comfortable second, reporting vibrations and vision issues in the laps prior to the issue, only to skate long at Abbey.

Having to limp the car home, Verstappen was able to move into second, Red Bull immediately taking advantage of the situation to take a free pit stop for the Dutchman.

That afforded Hamilton the same luxury, though the team elected not to take up the option.

It proved a dangerous gamble as, on the final lap, Hamilton’s his front left tyre failed as he ran down the Wellington Straight.

With a 30 second advantage over the fresh-booted Verstappen, Hamilton worked to drag his car to the line as fast as he dared.

With just three inflated tyres, Hamilton claimed the chequered flag from Verstappen by 5.8 seconds with Leclerc third and Ricciardo fourth.

Norris finished fifth ahead of Ocon, Gasly, Albon, Stroll, and Vettel to round out the points paying positions.

Missing the race entirely was Nico Hulkenberg, the German’s Racing Point refusing to fire pre-race and was forced to climb from the car without ever leaving the garage.

Hamilton now holds a 30 point advantage in the championship after his third successive win of the season, while Verstappen is now just six points behind Bottas in the battle for second.

Formula 1 returns to Silverstone next weekend for the 70th Anniversary Grand Prix.