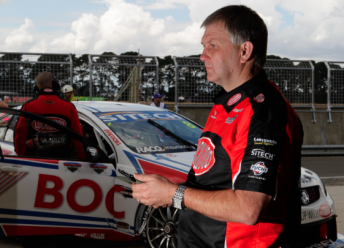 For as long as Kim Jones can remember, he’s tinkered with things.

As a child he bolted motors to a bit of wood and made billy carts, finding his way in the workshop of a local car dealership where he became a mechanic.

His father was President of the Albury and District Car Club for nearly two decades, easing his pathway into motorsport.

“We used to go to the working bees all the time, at the car club, and then basically I learnt to drive out there,” Jones told Speedcafe.com.

“I started racing push bikes, build our own Billy carts, and then we started motocross.

“(It) Was obviously the easiest way to go, and then I had a bad accident and broke one of my legs.

“So then I couldn’t motocross and I started to road race.”

“When I got it, basically the only thing that wasn’t rooted was the gear knob, so I busily went through that and rebuilt it all when everything, and raced that for a while,” Jones recalled.

“I always loved racing, I couldn’t really afford, because I had a family,” Jones added.

“I used to go racing on $200 a weekend. I had to have an engine in my Formula Ford that lasted all year.

“We used to run slicks at one stage in Formula Ford and I was sitting at the old pit lane, ready to go out onto the track at Sandown.

“It was pissing with rain and I had slicks on the car and Alan Hamilton came over to me.

“He stuck his head down into the car and he goes, ‘Kim what are you doing? It’s pissing with rain’.

“I said, ‘Well Al, I can’t afford a set of wets, so I’m waiting for the track to dry out so I can go and practice’.

“He used to smoke a pipe and he had an umbrella and he tipped the umbrella back and he looked up at the sky and he goes, ‘When you’re wet enough, go and see Russell Stuckey and tell him to get a set of wets and put them on my account. If you’re keen enough to sit here and wait for it to stop raining, which I ain’t going to do, I’ll buy you a set of wets’.

“So it was a very difficult time but I came third at Sandown in the TAA round.”

A lack of funds curtained his own racing ambitions, at least initially, before a motorbike crash on the road provided the opportunity to lay the foundations for what would become Brad Jones Racing.

“Bradley was racing and driving different bits and pieces, and we ended up getting a production car, a Mitsubishi Starion.

“I built that in the backyard; how hard could it have been, it’s a production car, you go and buy it, put a roll cage in it, put some numbers on it, and go and race it.

“We quickly found out that there was a tad more to it, than all that.

“So we become quite proficient at turbochargers and all those sorts of things, and won championships. Brad Jones during the AUSCAR era

“Then (we) had a Lotus Esprit, which we won championships with that (and) ended up with the AUSCAR and NASCAR programme.”

It proved a hugely successful time for the squad with Brad Jones winning five championships and forging a relationship with Hendrick Motorsport in the United States.

“We’re the first ones to ever own a Hendrick car, out of Hendrick, which was that first NASCAR that we won the championship with,” Jones said.

A move into touring cars following, running Audis in the Super Touring Championship through the mid-1990s. It was a time when Jones’ own role within the team began to really change, but also a period that has left him with some of his most endearing memories.

“There was always that going on because we never had enough money to be able to go racing without partners,” he responded when asked when the transition from tools to office began.

“Very rarely did we not race a car without a sponsor because we just couldn’t afford to, and so that commercial part of it was always in the background.

“As the business grew, we got other people to do the mechanics and the engineering and all those sorts of things, because the commercial part grew to the point that it needed that dedication.

“So probably around the Audi time was really when I didn’t work on the cars.”

The Audi deal came about as a result of a rumour.

Having heard a rumour that the four-ringed marque was interested in starting a racing programme down under, the Jones’ reached out and beat Fred Gibson to the deal.

“We just went to them, put a program together and then built relationships and it just developed,” he recounted.

“When the Germans first came here they were looking around and we had two hoists, a NASCAR and AUSCAR,” he added.

“They said, ‘Oh, you will be sending engines and gearboxes back to Germany for refurbishment?’, and we’re like, ‘No, no, we’ll sort this, we’re going to do it here’.

“We couldn’t afford to send everything back to Germany, and we didn’t.

“I don’t want to say that we’re the underdogs all the time, but we don’t have that resource, but we did have a fair drive to make it all work,” Jones said.

“Our car was very, very quick,” he added.

“We won a race with a front wheel drive car which hadn’t been achieved anywhere else, so there’s nothing wrong with the technology or the way things work.”

In 1996 the team won the Super Touring championship with Brad Jones at the wheel, while the team was picked to represent Audi in Macau.

“We’d been over there a couple of times with Mitsubishi, and then we went back with the Audis and it was quite funny,” Jones remembered.

“The first year Siegfried Krause, was the person I was dealing with (at Audi), and I rang up and said, ‘Look, we’re going to go and do Macau’.

“They sort of helped us because we were representing Audi.

“Frank Biela came and drove the car (and) for every one of our mechanics, they sent a German to look over our shoulder to make sure that we were doing things right.

“We did, what I thought was a very good job.”

It’s something of an understatement; Biela won the event with Brad Jones second, leading to a memorable moment post-race.

“We had to go up to the steward’s office and Charly Lam was walking along beside me, he put his hand on my shoulder and he said, ‘You have done an exceptional job, we’re Schnitzer BMW and you have beaten us’.

“That’s something that I’ll never forget. A man of that stature to say that a little team from Albury has come along and beaten somebody who’s won Le Mans and done everything else that Schnitzer have done.

“To say that we’ve done a good job that was a pretty big thing.”

A year later and Jones was back at Macau, again representing Audi but this time without significant German oversight.

Biela and his engineer were the only representatives of the marque sent out for the race, with Jones’ crew trusted to deliver on behalf of the automotive giant.

Back home, another Super Touring title followed in 1998 before a step into V8 Supercars, as it was then known.

“We decided that it couldn’t be that hard,” Jones reasoned.

“We’d won at most of the things that we’ve done by hard work and good people, and we went into Supercars and it wasn’t that easy.

“Its never been that easy, And this year just proves that it’s a whole other ball game, with lots of things outside your control.

“But you’ve got to look back and you know, we’ve been blessed to be able to do what we’ve done.

“We used to have the win races to get enough money, to be able to drive home, because we used to spend everything.

“I remember one day, some guy said to me, ‘How come you guys don’t have a truck, you’re very successful’. I said, ‘Trucks don’t make the car go any faster, dude. You’ve got to spend the money on the car, to make it go faster’.” Kim Jones at the wheel of a BJR Commodore in 2015

Away from BJR, Jones has maintained his passion for the sport and even rekindled his driving career at points.

He’s campaigned a March Formula Atlantic in historic competition, and there was even a cameo at Oran Park in a Mitsubishi Mirage in the mid-1990s.

“I hadn’t raced for years and Ross Williams said they were racing at Oran Park,” Jones said.

“So Warren Luff was fastest, Kim Jones was second fastest!

“I came into the pits and I said to Andrew, ‘Check the tire pressures’. He goes, ‘What for? You’re just having a bit of fun aren’t you?’ I said ‘We can win this, so come on, check the tyre pressures!’”

Jones duly qualified second on the grid, only for a crank trigger to fail on the first lap.

His racing career remains an unanswered question; a front runner in the Formula Ford championship when he campaigned that, he’s chalked up wins at the wheel of his March, too.

Life, though, would take him out of the car and into the pit bunker and garage, playing an instrumental role in the team that carries his brother’s name.

“My life changed,” he’d joked when speaking about his younger brother’s arrival into the world when he was just four years old.

“Some people can’t work with their family but we work in that we have different interests in different things and we don’t socialise much away from work, but as far as motor sport goes and working together it’s been a very good relationship.