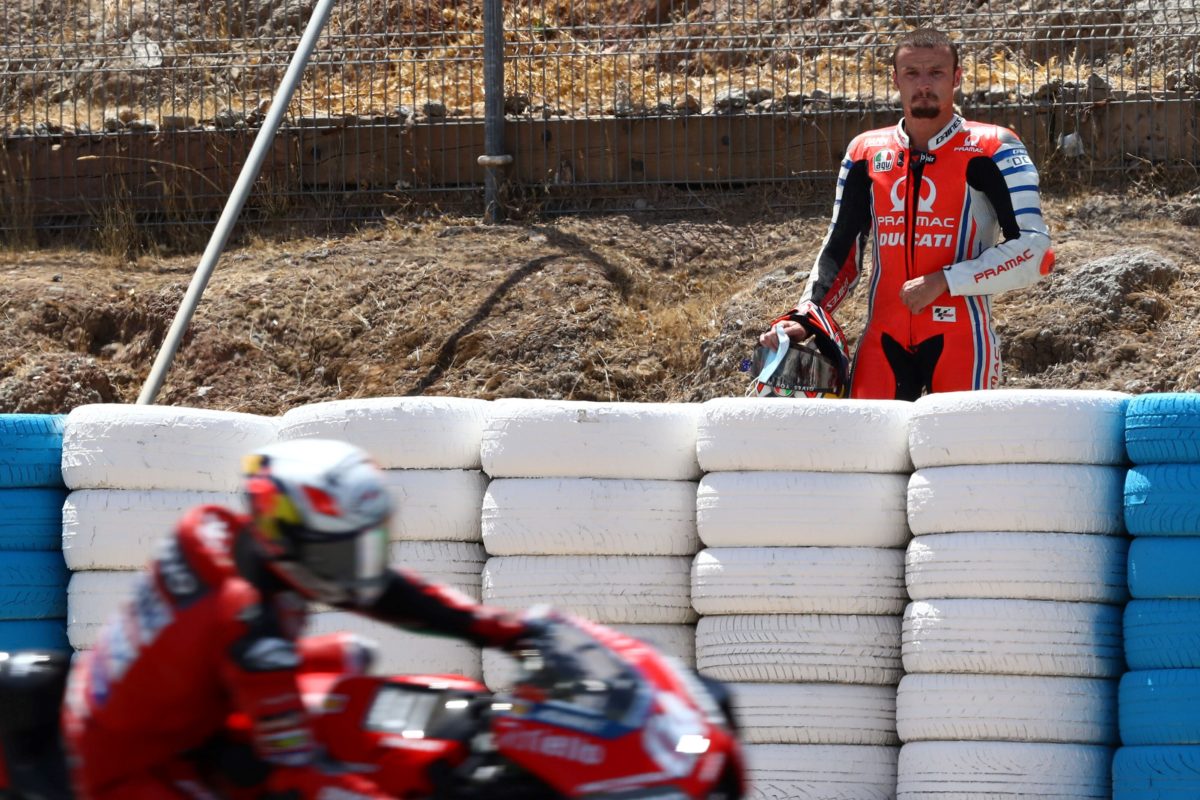 Jack Miller watches on after crashing out of the Andalucia MotoGP

Jack Miller says that his attempts to pass the factory Yamahas ultimately led to a loss of front grip which caused his race-ending crash at Jerez.

Miller had just re-passed Maverick Viñales for fourth position when the front wheel of his Pramac Ducati washed away through Turn 9 on Lap 11 of the Andalucian MotoGP.

The Australian had jumped from seventh on the starting grid to take fourth under brakes at the first corner of the race and held that position for the opening eight laps.

Having been stuck in the train which quickly formed behind Valentino Rossi, Miller lost a spot when he unsuccessfully tried to pass the other Monster Energy Yamaha of Viñales at Dry Sack (Turn 6) on Lap 9.

It was that sort of move which he says contributed to his demise two laps later.

“The Yamaha was going well on the exit of corners so I couldn’t pass them as easy as last week,” explained Miller.

“I’d tried to avoid the slipstream to try and make sure the front tyre wouldn’t get too hot.

“But, I had to make a few lunges on the brakes and when you’re doing that the front tyre gains temperature. I just lost grip and, in the end, I lost everything.

“I tried to be calm through Turn 9 but as soon as I released the brakes, I lost the front. It was a ‘nothing’ crash but quite costly.

“I didn’t do the whole race, but (the hand) felt good and better than last week so I can’t complain too much about that,” he added in reference to the numbness he experienced in the first race of the season.

“The biggest issue was that the grip level was quite low, so I struggled to be as calm and conservative as possible while also going fast.”

Miller had declared himself a title contender once Marc Marquez ultimately withdrew from Round 2 after a brave attempt to ride with a broken arm.

The DNF in the second Jerez race saw the future Ducati Team rider drop to seventh in the championship after finishing fourth a week earlier, but he remains upbeat about his chances next time out at Brno, where he qualified second on a drying track and finished third last year.

“I’ll go back to taking it race by race,” he said.

“There were a lot of people making mistakes but Fabio (Quartararo) got another 25 points (for winning). I’m 13 points off third in the championship, so a good result in Brno will take that down.

“As I’ve said all along, this isn’t a great track for me or Ducati. We’ll start again and move on to better pastures.”

Pramac Racing ultimately ended up with nothing at all to show for its efforts despite a weekend which promised so much after Francesco Bagnaia suffered an engine drama while running second.

Miller and the Italian had collectively outperformed the factory Ducatis through practice and qualifying and the latter was less than seven laps from a first premier class podium when #63 started smoking.

Andrea Dovizioso was ultimately best of the Desmosedici riders by finishing sixth from 14th on the grid while his Ducati Team team-mate Danilo Petrucci also crashed.