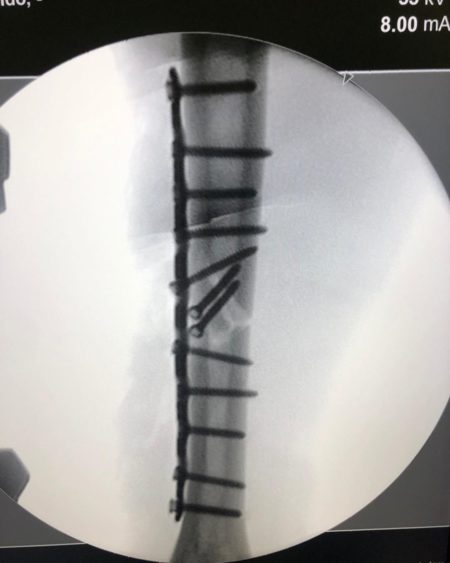 The limb with a plate fitted pic: marcmarquez93 Instagram

Marc Marquez has published x-ray images which appear to show his badly broken right arm before and after surgery.

Marquez fractured the humerus (upper arm) when he highsided during the latter laps of the opening MotoGP race of the season at Jerez and was hit by his own Repsol Honda.

He underwent surgery led by MotoGP Traumatology Specialist Dr Xavier Mir in Barcelona on the following Tuesday, when a titanium plate was fitted to the arm, and it was thought that he was a doubtful proposition for Round 3 in the Czech Republic.

However, Marquez passed a medical test only two days later again and rode in Saturday’s practice sessions in Round 2 at Jerez before finally pulling out of the Andalucian MotoGP after Qualifying.

“I felt good and even the rhythm with the used tyre, I was kind of surprised,” he said in explaining that decision.

“But for some reason, after I stopped in the box, I went out again and immediately (the strength went) down in the elbow, was like nerve or something that (meant) I lose the power immediately.

“This became dangerous. It is what I did all this week, follow my body and in that moment my body said ‘stop’. I stopped in the box, I told Honda I’ll try in QP1 and if I have the same feeling I will give up.”

The images which the six-time premier class champion posted to social media the day after that grand prix are captioned, “Good morning everybody! We start a new week with great energy, but first let’s enjoy some pics from last week!”

Among them are a broken limb prior to surgery and a limb with a plate and 12 screws fixed to it.

Marquez will now focus on another comeback at Brno on August 7-9, where he would arrive 50 points behind Fabio Quartararo after the Petronas SRT Yamaha rider won both races in southern Spain.