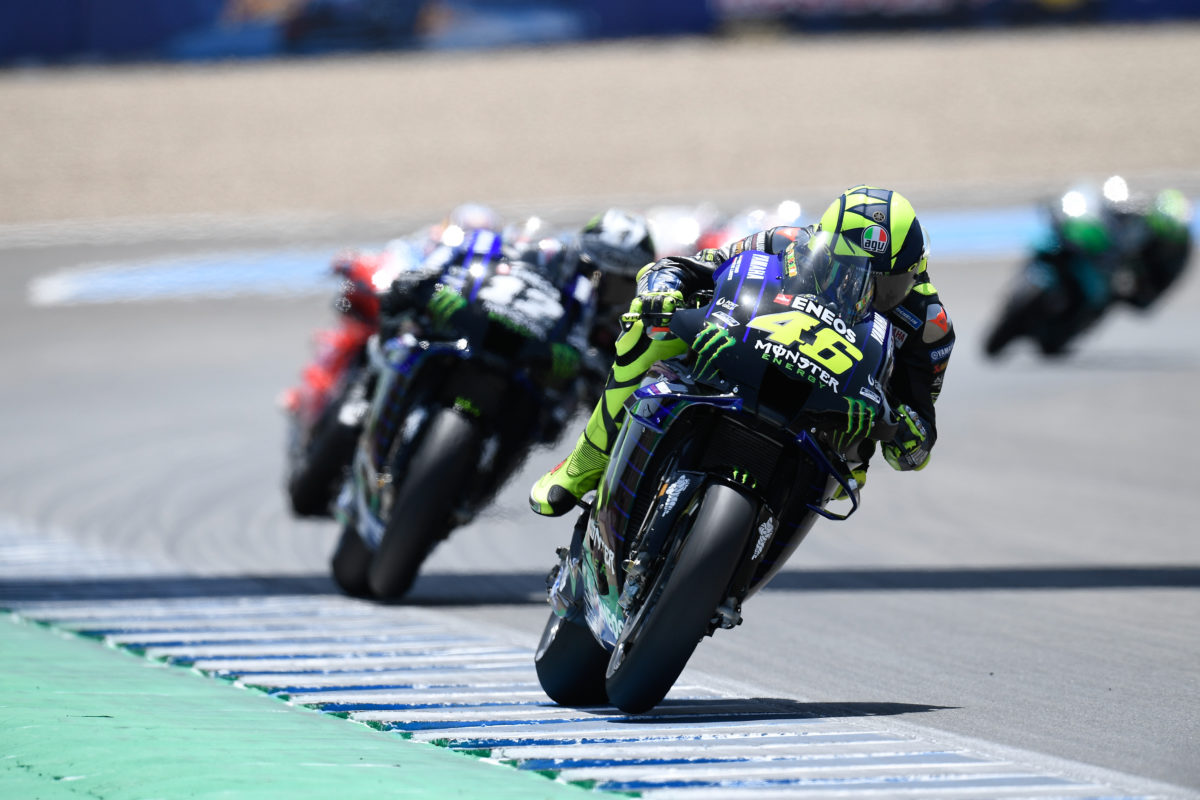 Valentino Rossi has explained how a different set-up, which had been resisted by Yamaha’s engineers, helped him break a long podium drought in the Andalucian MotoGP.

Rossi finished third in the second Jerez race of the season, breaking a 17-round run without gracing the rostrum dating back to last year’s Grand Prix of The Americas.

The veteran was still the third M1 rider home, behind back-to-back winner Fabio Quartararo, who will take over his seat at Monster Energy Yamaha next year, and current team-mate Maverick Viñales.

However, the result was a far cry from that of seven days prior, when he retired with an engine issue.

Rossi put the performance down to he and new-for-2020 crew chief David Muñoz managing to convince his team that he should go a different way on set-up.

“Not just after last race, but all the second part of the 2019 season was very frustrating,” said the seven-time premier class world champion.

“I was so slow and I suffered very much. But this time we work in another way.

“We have to work hard because with David, we have to put pressure on Yamaha because sometimes it’s something political. It’s a political problem. We want to change the bike and we don’t give up.

“And from Friday morning, I have a better feeling. Sincerely, this time my team helped me a lot, because they give me a light at the end of the tunnel, they give me another bike.”

Rossi reasoned that Yamaha still needs to listen to his opinions given he is set to continue his career next year at Petronas SRT in a direct swap with Quartararo.

“When you ride the same bike as Fabio and Maverick and they are able to be so fast, so strong, Yamaha thinks that I have to ride like them,” said the 41-year-old.

“But they need to support me, because I’m here in the factory team and next year I will race with Petronas, so they have to trust me, because I think that maybe I’m not faster (than Viñales or Quartararo) on the track but I can make good races.”

Yamaha Motor Racing boss Lin Jarvis appeared to back up Rossi’s claims in comments on British television, noting the reluctance of the Japanese marque’s engineers to defer to #46 when his stablemates have been far more competitive.

“Most of our Yamaha have a similar range of settings, the zone they are working in is pretty much common,” Jarvis told BT Sport.

“But Vale struggled to get to grips with that and to feel comfortable and make it work for him.

“Changing the minds of Japanese engineers sometimes is not so simple, because we have a lot of data and information and the other guys are going fast. So why go in this other direction?

“But Valentino obviously has a lot of experience and he knows what works for him. He pushed, we accepted and made the change.

“I wouldn’t say it’s resolved all his problems but he feels a lot more comfortable, he feels it’s his bike again and therefore he can ride it better.”

While Quartararo and Viñales matched their results from the season-opener, Rossi moved to sixth in the championship with his first points of the campaign.

The third round for the MotoGP class takes place at Brno, in the Czech Republic, on August 7-9.