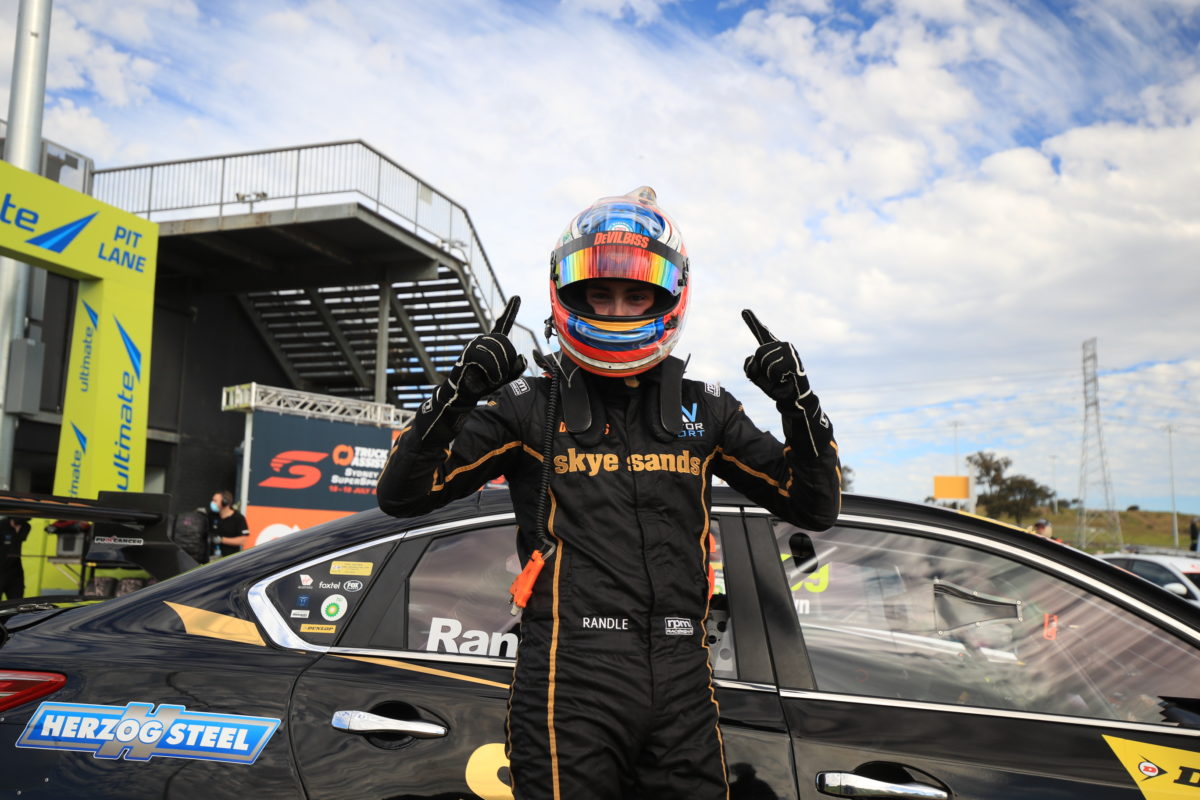 Thomas Randle says that he achieved his “biggest goal” from Round 2 of the Dunlop Super2 Series at Sydney Motorsport Park by taking the lead in the title race.

Randle heads the second-tier Supercars series for the first time in his career after a somewhat unfortunate second placing and a win last time out, off the back of a sweep of the two pole positions.

The MW Motorsport driver had revealed prior to hitting the track that he would be treating the round as though it was the last of the year given the upheaval caused by the COVID-19 pandemic.

He then went on to fall just shy of maximum points from the weekend.

“It feels like it’s the best time to be leading that championship,” Randle told Speedcafe.com.

“I mean, it was awesome to have the orange numbers (denoting the series leader) on the car, and that really was the biggest goal leading into Sydney Motorsport Park – to be coming away with the championship lead – because there’s quite a lot of uncertainty with the Super2 Series.

“The weekend was awesome, to get two pole positions, and a race win on the Sunday.

“(I) Should have had the race win on Saturday, but that whole drama was a bit out of my control.

“In Sunday’s qualifying, I probably just drove about 90 percent, because I got a kerb strike at the start of the session so I was down the back and I didn’t really want to risk another one, but no, it’s great.”

The drama to which Randle refers was the 15-second penalty which he was handed midway through Race 1 for what was judged to be a breach of restart procedure.

The 24-year-old accelerated then braked sharply, allowing Will Brown to pull alongside and ultimately go on to win the race in his Image Racing VF Commodore.

Randle was initially classified ninth outright, eighth of the Super2 class, before the penalty was overturned when it was found that he braked due to a marshal continuing to display a yellow flag.

The drama came just over 12 months after he lost what would have been his first Super2 race win due to multiple restart breaches, then committed another on the following day.

In Sydney, Randle was adamant that he had not in fact been in the wrong when told about the penalty by team owner Matthew White post-race, and would be vindicated.

“It was a little bit confusing because, normally, you get a green flag before the last corner, and then you can dictate when you go,” he explained.

“Normally, Safety Car lights go out fairly early so the Safety Car will be back in pit lane before you get to the last corner, so they can bring the greens out.

“But I think James Taylor (Race Director) wanted to get the race underway so we wouldn’t go time-certain, which meant the Safety Car lights went out really late and it wasn’t in the lane until we were already coming out of the last corner.

“Then, I was just waiting, and Will was actually already overlapping me, so technically that was a breach, but I think because there was a bit of a kerfuffle…

“What happened was, the yellow lights went out, so I went, and then out of the corner of my eye I spotted a flag marshal still showing yellow.

“So, I slowed down because I thought, ‘Oh, hang on, maybe we’re not green,’ and then I went again, and then Will got the jump.

“I was very surprised when I got the 15-second penalty, because I thought, ‘Did I actually do something wrong? I don’t remember.’

“So, I said to Matt, ‘Look, can we put an inquiry in?’ and, sure enough, they looked at the footage and they removed that penalty.

“That would have really changed the weekend. It would have meant we would have finished ninth, and definitely wouldn’t be leading the championship.”

The Melburnian remained in New South Wales after the event given the uncertainty caused by state border closures and has been competing in a karting enduro in the Australian Capital Territory today.

It means he is also engaging in telehealth to monitor the testicular cancer which he revealed prior to the start of the season.

“I’ve got another CT scan in just under a month now, which I can do that anywhere because it’s all digital, and I’ll know more then,” he explained.

“There’s just been one spot they’ve been monitoring and that could throw another spanner in the works. If that has increased in size, then racing would just have to get put on hold, and I’d have to get stuck into some form of treatment.

“I’ll find out more in a month, and at the moment, I’m just doing telehealth conferences with my oncologist, because obviously I’m not in Melbourne, but also because of COVID, they really want to limit their contact.”

Randle’s series lead over Brown is 38 points with the next round currently slated for Sandown, southeast of the Melbourne CBD, in September.