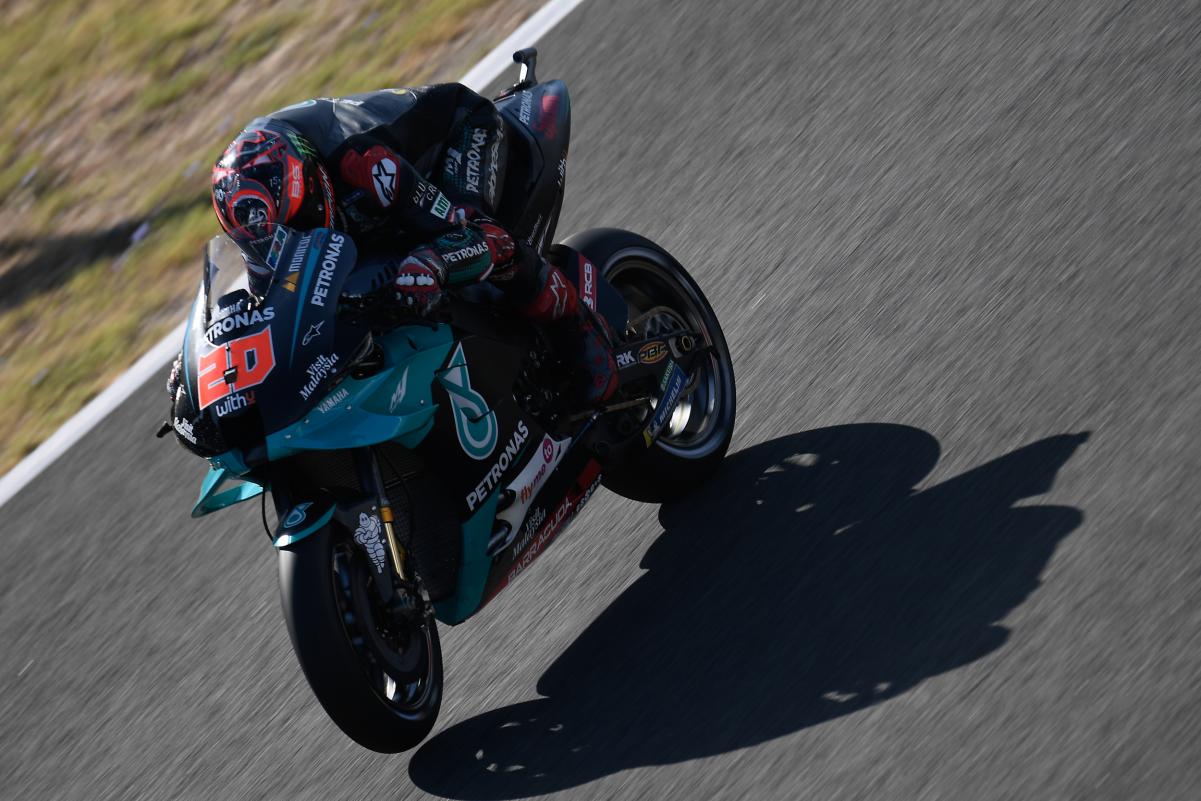 Fabio Quartararo is now two wins from two to start 2020 after dominating an Andalucian MotoGP which saw only 13 finishers.

Yamahas filled the podium at Jerez with Maverick Viñales second and Valentino Rossi third but the former was seriously hampered by an early error which saw him get stuck behind his factory team-mate as Quartararo disappeared.

The fourth M1 in the field, the Petronas SRT entry of Franco Morbidelli, did not see the chequered flag, nor did either of the Pramac Racing Ducatis after Jack Miller crashed and Francesco Bagnaia suffered a mechanical problem while running in second with a quarter of the 25-lap race remaining.

Quartararo led the field away from Viñales and a strong-starting Rossi, while Miller took fourth position under brakes at the first corner.

Bagnaia dropped from third on the grid to sixth in the opening corners but reclaimed one spot when he went by Nakagami at Dry Sack (Turn 6) on Lap 1.

Viñales was less successful in trying to put a move on Quartararo at the Jorge Lorenzo Corner (Turn 13) on Lap 1, going deep and ultimately ceding his position to the other Monster Energy Yamaha of Rossi instead.

That would prove costly when Rossi held him up as Quartararo galloped up the road on the #20 Petronas SRT Yamaha, establishing an advantage of 1.6s after just three laps and growing.

Bagnaia, meanwhile, had briefly dropped back to sixth when he nearly fell in trying to overtake Miller at the Lorenzo Corner on Lap 2, but re-passed Nakagami quickly.

Morbidelli then snuck past Nakagami for sixth position at the Lorenzo Corner on Lap 7, while Miller dropped back to fifth when he ran long while attempting a pass on Viñales at Dry Sack on Lap 9.

The Spaniard had by then given up some ground to Rossi, and lost a spot to Bagnaia when he went wide himself at Dry Sack on Lap 10.

Viñales was then picked off by Miller and Morbidelli in consecutive corners at the start of Lap 11.

Miller, however, only got to Turn 9 on that lap before he lost the front end of his Desmosedici and crashed out of the race.

Bagnaia soon came to be pressuring Rossi, and was rewarded with second position when the veteran ran wide at Dry Sack on Lap 12, by which time Quartararo was around 4.5s clear of the field.

Morbidelli also closed in on #46 before his Yamaha slowed at the start of Lap 17 with a technical issue which appeared similar to that which accounted for Rossi seven days earlier.

Viñales was at one point well over a second adrift of that battle before reeling his team-mate back in, but still could not find a way back past ‘The Doctor’.

They each gained a position, however, when Bagnaia’s Ducati started blowing smoke and he pulled off on Lap 20.

The Pramac rider’s exit meant that Quartararo’s advantage had ballooned to over eight seconds, and attention turned to the intra-team stoush between Rossi and Viñales.

The Spaniard had more pace but was continually rebuffed under brakes until Rossi twitched in the stop for Turn 9 on the penultimate lap and ceded second position to #12.

Nakagami even looked a threat of a podium but Rossi had enough of a margin to make it to the chequered flag in third.

Quartararo, on the other hand, cruised to another 25-point haul while Viñales was second again as Marc Marquez (Repsol Honda) sat on the sidelines having called off his grand prix weekend after Qualifying.

Nakagami and Mir rounded out the top five, with Dovizioso coming from 14th on the grid to be top Ducati in sixth.

Pol Espargaro rode his factory Red Bull KTM to seventh despite a costly opening lap, and Alex Marquez came from last on the grid to finish eighth on his Repsol Honda.

Cal Crutchlow, who was also in for surgery during the week, gritted his teeth to be last finisher on his Castrol LCR Honda.

The Czech MotoGP is next at Brno on August 7-9.