MECHANIC: Callum Glanville, from ecstasy to agony and back

MECHANIC: Callum Glanville, from ecstasy to agony and back 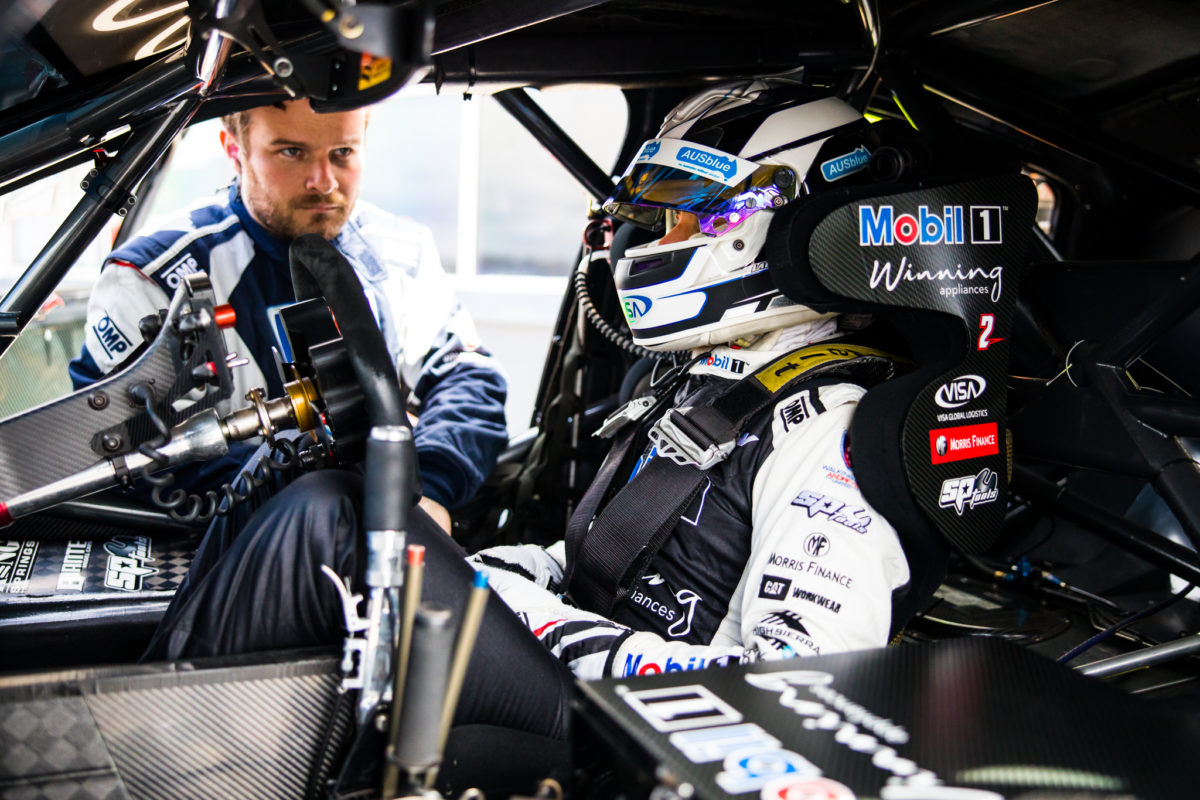 As Scott Pye pulled out of the pits midway through Sunday’s race at Winton last year, Callum Glanville was in agony.

While he fitted new tyres to the Walkinshaw Andretti United Commodore, his pained screams were audible over the sound of the racing engine.

Glanville is passionate about motorsport. His pathway into the industry came after pestering Larry Perkins for a job while still at school.

But on that day at Winton, all Glanville could think about was the pain.

“I was actually in tears between pit stops because I still knew I had another one to go that day,” he told Speedcafe.com.

The searing pain surging through his back was not new. He’d begun experiencing symptoms at the start of the year, but by that event it had got too much.

“I sort of took myself off the pit crew to get it sorted, went and saw a heap of doctors, none of whom could give me any answers,” he recalled.

“That went on for about six months. Doctor after doctor after scan after scan, none of them could find anything wrong. So I just though I overdone it; too much pit stop practice, whatever.”

The truth, however, was rather more serious. Still short of his 30th birthday, and with a young family, Glanville was eventually diagnosed with Hodgkin’s lymphoma. 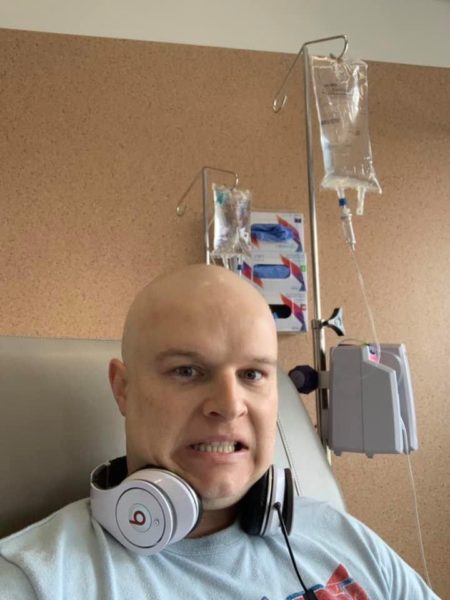 “I basically stopped travelling for a little while to get myself right, and finally met a GP who would listen to what I have to say,” he explained.

“He did a few scans and put me in touch with a clinical trial centre in Monash Hospital and got diagnosed with Stage 4 Hodgkin’s lymphoma.”

Stage 4 is the most severe of the disease, meaning the cancer has found its way out of the lymph nodes and has spread to the other parts of the body.

Glanville underwent four cycles of chemotherapy towards the end of 2019, starting shortly after the Supercheap Auto Bathurst 1000.

He missed the back end of the season as a result, but it was worth it.

“I’m just trying to get my fitness back; it’s been a rough six months, that’s for sure.

“Going racing was really the final step for me to be better,” he added.

“I’d done all the chemo, I’ve grown my hair back now too. I was feeling better again, but going racing is just such a physically demanding job.” 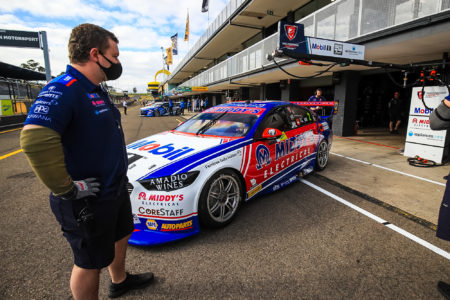 Glanville made his return at Sydney Motorsport Park last month, rattling the wheels on and off the right-hand side of Bryce Fullwood’s car.

It was the closing chapter on what had been a tumultuous year in which he battled personal issues at a time when Walkinshaw Andretti United was undergoing its own transformation.

“Last year was such a tough year, just with the disease, and drivers out of contract, and losing sponsors, and all sorts of stuff happening.” he admitted.

“When you get a diagnosis like that, it sort of puts everything into perspective.

“If you’re not right, none of that even matters.

“It was definitely good to just look inside a little bit, and just take time to take a breather, get myself right and almost come back with a bit of a renewed excitement to come back racing.

“The little things don’t matter as much as they used to anymore, I definitely pick and choose what to get stressed about.

“Racing, it’s definitely a good outlet for me now, to go away and have a laugh with the boys, race some cool cars, and it means I’m not under the weather now.”

Glanville is the Number 1 mechanic on Fullwood’s car, having entered the industry pushing a broom around the Perkins Engineering workshop.

“I was just riding my bike on the weekend down at Moorabbin Airport, and Larry’s doors were open.

“He was having an open day selling merchandise and old panels and stuff.

“I walked in, that was my first time inside a race team, and my head was just blown away by what I was seeing.

“I ran straight over to tell my dad about it, and he was like, ‘Well, why don’t you go ask him if you can go in and have a part time job?’

“I was like, ‘That’s a ripper idea’, (so) I trundled back down the next day and pretty much told him I was going to come in and sweep his floors, and thankfully he agreed.”

For the next four years Glanville visited the workshop most days after school, sweeping floors and helping out where he could.

It saw him spend time with sub-assembly, the paint shop, peeling off stickers, and an array of other tasks befitting an energetic teenager hell-bent on kick-starting a career in motorsport.

“I didn’t get paid for any of that in those four years, but it instilled in me the basic work ethic, and he was just so good to learn off,” Glanville said.

“I still carry a lot of what I learned in the workplace with me now, from Larry. 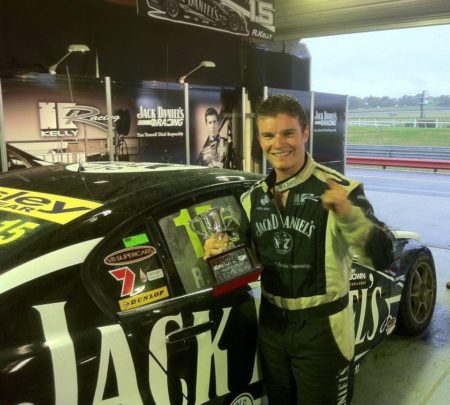 In 2009, Perkins Engineering became Kelly Racing, with Glanville taken on as junior mechanic, building brakes, rattle guns, bodywork, and helping out the race team where he could.

After two years with the squad he’d earned a promotion and was appointed Number 2 mechanic on Rick Kelly’s car.

“That was probably one of the biggest steps for me, to move onto a car full–time,” he admitted.

“That’s when you really feel part of it, really involved with some great results that year too.”

For the following season he worked with Greg Murphy in what can best be described as a character building campaign.

At the end of that season though his phone rang.

“I got the call from the Holden Racing Team at the time,” Glanville said.

“You get a phone call from HRT, you’re going to pick it up, aren’t you?”

He met with Anthony McDonald and for 2013 he, together with Greg Murphy, moved across to HRT.

That year offered Glanville an opportunity to learn and make mistakes away from the HRT spotlight.

Now, five years on, he’s part of the furniture in Clayton and the links through its tie-up with Andretti Autosport have seen him work at the Indianapolis 500.

“Andretti was looking for a mechanic to spanner their wildcard car, which was Stefan Wilson at the time.

“To even just be a little part (of the team) that was unreal, and I’m hoping I get to do it again at least one more time, because I spent the whole three weeks just absolutely blown away by how they do things over there.

“I took over a little black book (to note any) ideas that I could bring back, to maybe help us, and improve us, and it came back virtually empty, to be honest with you,” he added. 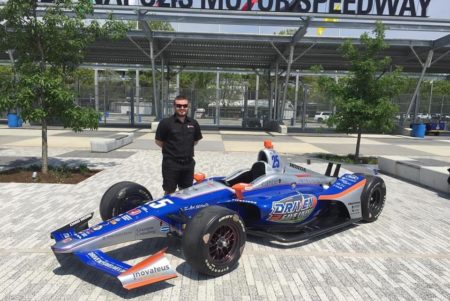 “That month, as blown away, and as thankful, and grateful as I was to be able to do that, it also made me realise how well we do things here; not just us as a team, but also as a series.

“It’s hard to explain, but we do things very well here in Australia, and everyone from every team should be really proud of the show we put on with the cars we prepare here.

“You sort of put IndyCar, NASCAR, Formula 1 up on a pedestal, especially being from Australia, we just race dirty old touring cars.

“When you get up close, these guys aren’t doing anything different to what we’re doing really, the cars just look a bit different.”

The Indianapolis experience remains a highlight, with nervous memories in the closing laps where a risky fuel strategy put Wilson in the box seat for an unlikely win.

“We were leading the race at five laps to go on a risky fuel strategy; we nearly won the bloody thing, if we had have got a late Caution.

“That was probably the most stressful time of my life.”

Locally, he cites the 2016 Sandown 500 win with Garth Tander and Warren Luff as a highlight, a moment where exactly what he does for a living, and what he had achieved, hit home. 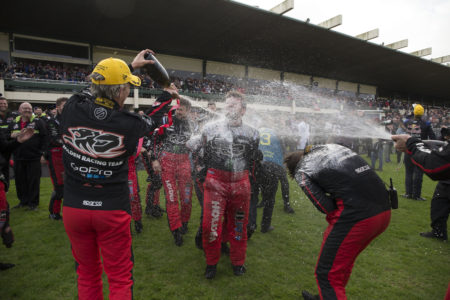 “I used to wag school as a kid, and go to Sandown when the race was on,” Glanville admitted.

“We used to be there in school uniform, sitting in the stands, freezing in the cold.

“I’d spent my whole childhood looking down onto the track, and then I was finally on the track, looking up back at the stands, and had a trophy in my hand and I’m covered in champagne…

“That was one of the ‘I’ve made it’ moments, I think, where I was looking back at the same grandstand I was sitting in as a kid, and I just won probably the second biggest race on the calendar.”

Predictably, Bathurst remains a career ambition, though not the only one.

He’s twice finished second in the race but “it’s probably the worst place to finish,” he suggests.

“Having such a solid day, coming so close. I’m a bit over coming second, that’s for sure!

“I’d still rather a championship than a Bathurst, to be honest,” he added.

“You can’t get lucky and win a championship. A championship is a full year of hard work, solid results, nothing (going) wrong.”

What was more remarkable, however, was not preparing a car for the man who gave him his break in the sport, but what came afterwards.

“As we’re packing up at the end of the day, (Larry) sort of called me,” Glanville recounted.

“I hadn’t seen him in many years really, since I worked for him.

“He called me outside the truck and he said, ‘You know what? I’m really proud of you’.

“He goes, ‘You never asked me once, and I’m really proud of you, and you’ve done well. I was hard on you as a kid, and I didn’t get to you, you’re still here’.

“That was important for me, because that wasn’t Larry the famous race car driver telling me he was proud of me. That was Larry, my mentor, my boss – a guy who I thought probably hated me as a kid.

“Turns out he didn’t, he was being hard on me for me, I guess. So that was pretty important.

“Getting some recognition like that off someone who taught you so much, it’s super important, and makes you know that you’re doing the right thing.”