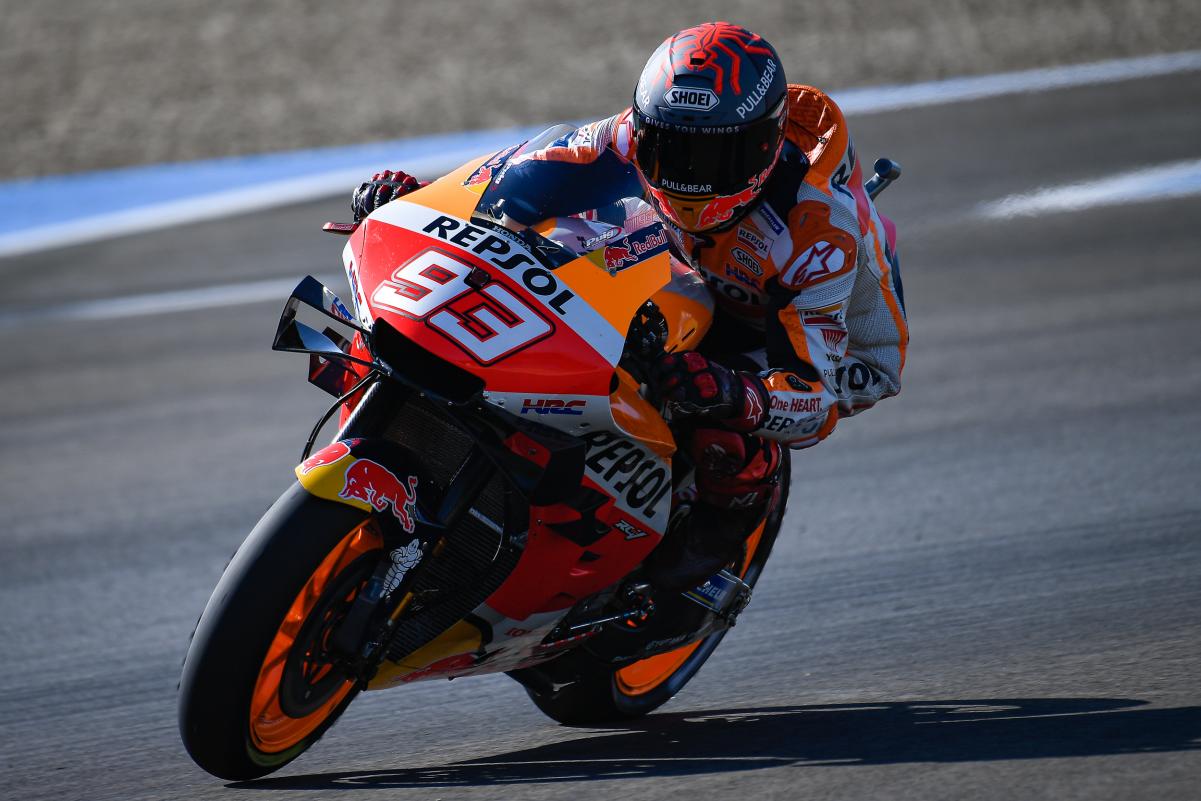 Repsol Honda Team Manager Alberto Puig has lauded Marc Marquez for his courage despite ultimately pulling out of the Andalucian MotoGP.

The six-time premier class world champion had an awful highside on the fourth-last lap of last weekend’s Spanish MotoGP, in which he incurred a broken right humerus (upper arm).

Despite undergoing surgery on Tuesday, Marquez passed a medical examination upon his return to the Circuito de Jerez two days later, with a plan to get back on track on the second day of Round 2.

The Spaniard indeed did, clocking a personal best 1:37.882s during Free Practice 3 which granted him the right to start qualifying and therefore to race given it was well within 107 percent of the fastest lap of the session.

Marquez continued in Free Practice 4 and went out at the beginning of Qualifying 1 but pitted at the end of his out lap.

Repsol Honda confirmed via social media that he would not return to the circuit for the remainder of the session and then, in the moments after Qualifying 2 had come to an end, that he was out of the grand prix altogether.

“I think that the champion that believes (he) has a small possibility to get one, two, or even three points… A real champion always tries, and this is what he did,” declared Puig, himself a premier class race winner.

“The courage he showed was unbelievable, but also, we still have 11 races to go, and for sure we are not going to give up.

“Marc will recover and the team is going to be there for him and we will come back and we will attack.”

Puig explained that the circumstances which transpired were always part of Honda’s plan to test the fitness of its star rider in real world conditions.

He said that Marquez was ‘listening’ to his body but it eventually became apparent that the risk of continuing to ride was too great.

“The plan was this, more or less,” said Puig.

“When we decided to do this, the plan was to skip Friday and to try Saturday in the morning (FP3), to make like a function test to see if he was ready to go on the bike.

“In the afternoon, we found out… I mean, with the heat and the laps, it was more painful for him, so we finally decided that the best was to stop and to look for Brno, and that’s what we’re going to do.”

Asked why Marquez did end up going out in qualifying, Puig explained, “Well, he wanted to try the way he understood the test.

“So, we tried and, to be honest, we followed the plan, and the plan was to try to some point, and that’s what we did.

“We tried to this point and from that point on, when it was clear that it was not possible or it was too much risk to continue, then we decided together.

“I mean, the plan was there and we followed it. Marc was listening to his body all the time, not to his ambition.

“He listened to his body and when you have an injury and the body says, ‘That’s it,’ that’s it. So, that’s what we decided.”

On the question of when Marquez will return home and whether he will try to race in Round 3 in the Czech Republic a fortnight later, Puig replied, “I really don’t know when he is going home but our plan is to go to Brno, for sure.”

The factory Honda squad could very well have not had a bike in the second Jerez race at all given Alex Marquez, Marc’s younger brother, had a fast crash at the Sito Pons Corner late in Q1.

Advice from Repsol Honda that the 2019 Moto2 world champion had “avoided any series injuries” came via social media shortly after that 15-minute stanza finished.

Race start for the Andalucian MotoGP is scheduled for Sunday at 22:00 AEST.