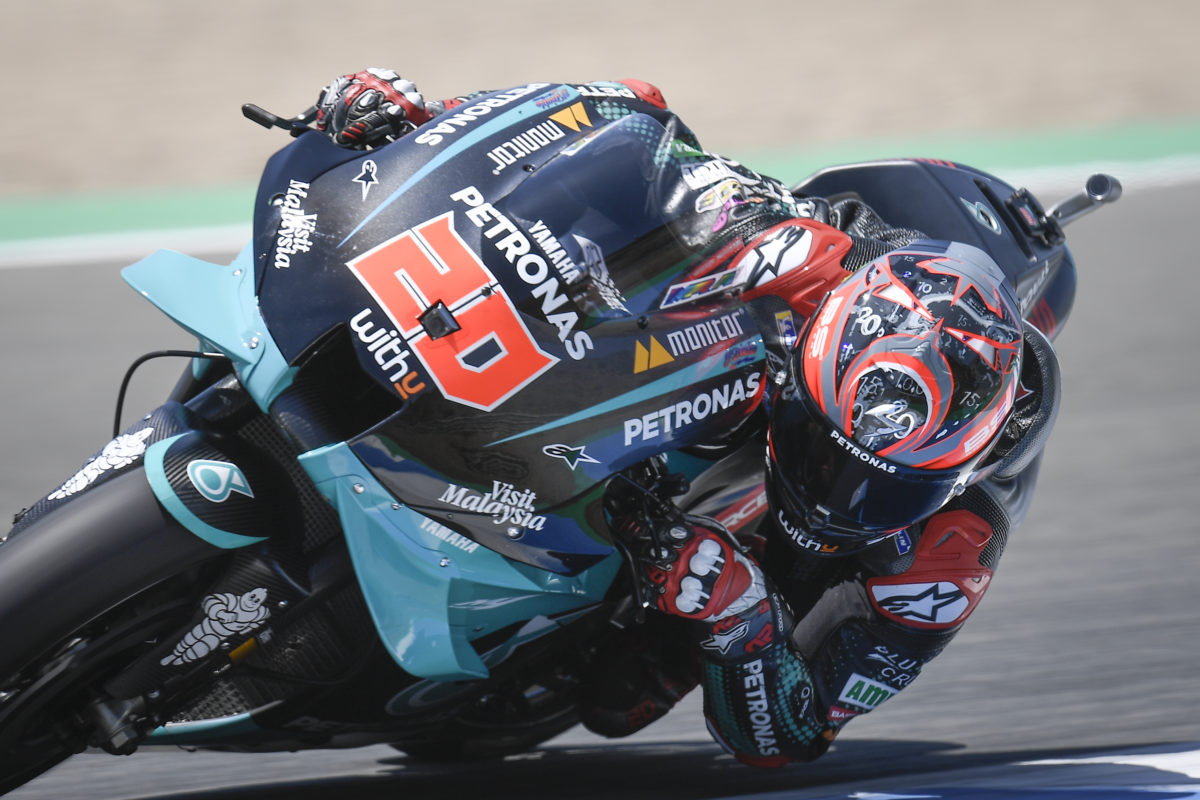 Fabio Quartararo has taken pole position for the Andalucian MotoGP while a wounded Marc Marquez pulled out of proceedings after qualifying.

Maverick Viñales lapped the Jerez circuit at 1:36.907s with the chequered flag out on Qualifying 2 but that time was quickly cancelled due to a breach of track limits exiting Turn 7.

There will nevertheless be M1s first and second on the grid given Viñales’ second-best lap was better than all others except the 1:37.007s which Quartararo set at the start of his second run.

Marquez, who had passed a medical examination on Thursday after surgery on a fractured arm just two days earlier, earned the right to start Sunday’s 25-lap race by clocking a 1:37.882s during Free Practice 3, his first session of the event.

He continued through to Qualifying 1 but brought his Repsol Honda back into the pits at the end of his out lap and took no further part in proceedings.

The team confirmed in the moments after Qualifying 2 had come to an end that Marc Marquez would not race.

Of those who did get to the second stanza of qualifying, it was Viñales who held sway at the end of the first runs with a 1:37.102s, ahead of Bagnaia at 0.187s adrift and Quartararo 0.020s slower again.

The latter was the first and ultimately only rider to better Viñales in the second runs, taking his Petronas SRT Yamaha to a 1:37.007s on his next flyer.

Bagnaia subsequently consolidated his hold on third position with a 1:37.176s although he need not have bothered, as it turned out.

Red Bull KTM Tech3’s Miguel Oliveira came from Q1 to be briefly fourth-fastest in Q2 with a 1:37.344s after the flag, only to then be pipped by Valentino Rossi (Monster Energy Yamaha) by 0.002s.

Franco Morbidelli (Petronas SRT Yamaha) will join them on Row 2 after also progressing from the first 15-minute hit-out, while Miller was a very late improver from 10th to seventh.

Takaaki Nakagami threatened the front row, going only 0.110s slower than Quartararo’s pole lap to the third sector, before he ran his Idemitsu LCR Honda off the road as he braked for the Jorge Lorenzo Corner (Turn 13).

The Japanese rider was ultimately shuffled back to eighth, with the top 10 rounded out by Brad Binder (Red Bull KTM Factory Racing) and Joan Mir (Suzuki Ecstar).

Cal Crutchlow was a commendable 13th all told on his Castrol LCR Honda and fellow injured rider Alex Rins 20th on his Suzuki Ecstar entry.

The Ducati Team’s Andrea Dovizioso is consigned to 14th on the grid having only managed to achieve a 1:37.656s in Q1.

At one point it appeared that neither Repsol Honda might start when Alex Marquez crashed at the fast Sito Pons Corner (Turn 5) in Q1.

The team has advised via social media that the younger Marquez brother has “avoided any series injuries”, although he will be last on the grid having already been slowest at the time of the incident.