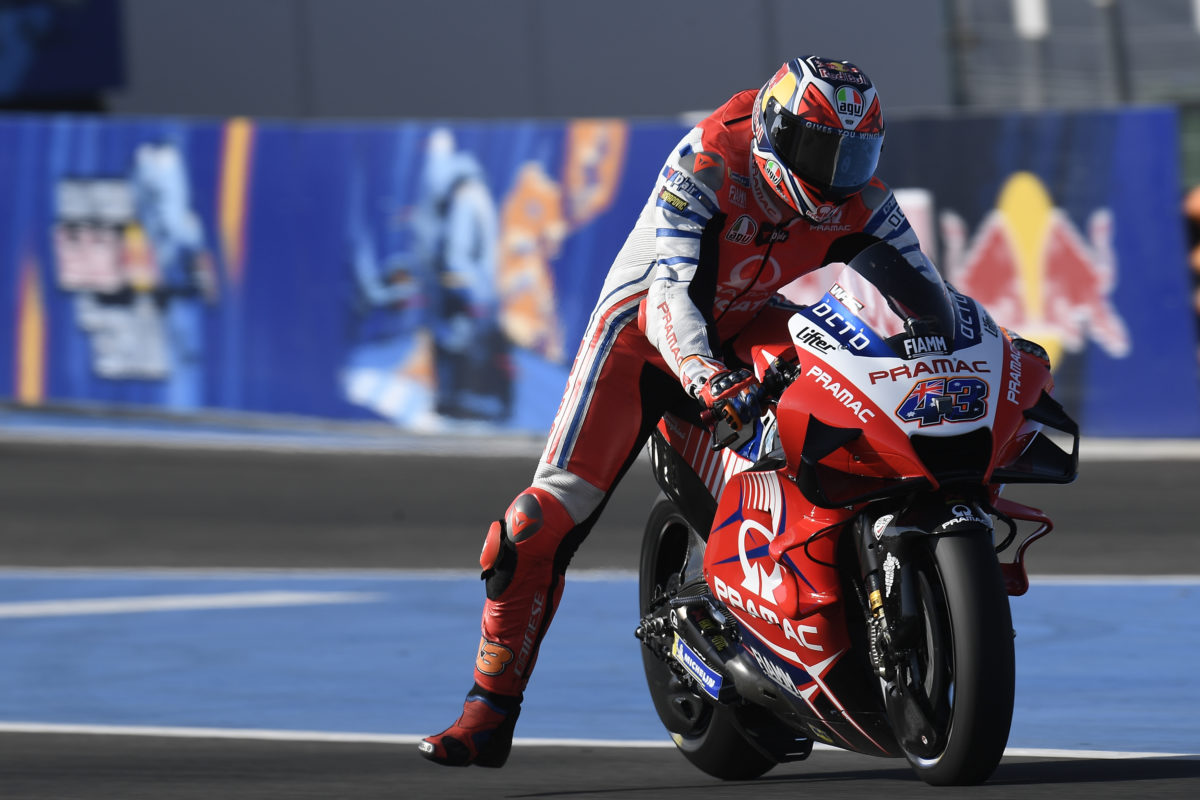 Jack Miller is confident that there will be no repeat of his hand numbness after handlebar adjustments to his Ducatis ahead of this weekend’s second MotoGP round at Jerez.

Miller faded somewhat on his way to fourth in last weekend’s season-opening Spanish MotoGP after losing feeling through his right wrist, which he put down to the position of the handlebars on his Desmosedicis.

The Pramac Racing rider was seventh-fastest across the two Friday practice sessions for the Andalucian MotoGP, after which he reported that the issue seems to have been resolved.

“I think a (different) part was already on the bike probably about a half-hour after the race, to be honest,” said Miller.

“We found a piece that we think is working better. But I won’t really know until we get to do 25 laps on Sunday. But just in general, today it felt better.

“I wasn’t out there trying to break lap records. Especially in the faster corners, I was not taking too many risks.

“For sure, pushing, but keeping a little bit in the tank for FP3 tomorrow, because I know that it’s going to be very important and saving it for then and qualifying.”

Despite running at Jerez on consecutive weekends, Miller believes that the prevailing conditions mean that Round 1 set-ups cannot necessarily be relied upon.

“Already this afternoon, the track temperature was a bit hotter than it has been, and the forecast is for it to be even hotter over the weekend,” he added.

“So, we’re just trying to understand what tyres to run, because I feel a lot of guys are sort of stuck in their way of focusing only on the (soft rear) tyre that the race winner and most of the grid ran last week, which I think was good and everything, but my feeling is that we can focus on both tyres that we have.

“I don’t think we can discount the medium, because the track is always different, day in day out, and what worked last week may not work this week. So, we’re keeping our options open, you could say.”

The factory Monster Energy Yamahas set the pace on the opening day of the Andalucian MotoGP, with Maverick Viñales fastest on a 1:37.063s and Valentino Rossi next on a personal best 1:37.205s.

Cal Crutchlow (Castrol LCR Honda) and Alex Rins (Suzuki Ecstar) propped up the timesheets after missing the first race of the season due to crashes earlier in that event.

As expected, Marc Marquez (Repsol Honda), who underwent surgery on the same day as Crutchlow earlier this week, has not yet ventured onto the circuit after breaking an arm late in the Spanish MotoGP.

“Yesterday (Thursday, local time) I arrived at the circuit after the operation in Barcelona and passed the medical test in the afternoon,” said the world champion.

“It means I can ride, and after discussing with Honda we decided to start directly on Saturday.

“I have slept quite well, I am obviously in some pain, but we have had physiotherapy sessions with my physio that have been quite good for me.

“With the team we have set ourselves only one objective, which is to see our feelings tomorrow (Saturday) in FP3. Let’s see how the arm is and from there we will decide our next objective.”