A rare helmet signed by every pole winner from the 11 of the most dramatic seasons of Supercars competition has been offered for sale through Lloyds Auctions in Speedcafe.com’s monthly charity event.

The Pole Position helmet is just one of four created, fans just have two weeks to bid on this piece of memorabilia with 100 percent of proceeds going directly to Motor Racing Ministries.

The helmets were created in 2015 to celebrate Armor All’s initial 10-year involvement as the Pole Award presenter of the Supercars from 2005 to 2015.

The helmet is in black, has been signed in gold pen, comes with unique orange trims, Armor All 10th-year branding, and has been finished in a gloss to ensure the signatures remain permanent.

Fans have the opportunity to bid on the items until 19:00 AEST on Tuesday August 4. CLICK HERE to bid.

The only signature missing from the helmet is that of Jason Richards, who lost a battle with cancer in 2011.

Instead, the popular Kiwi is represented on the helmet with one of his famous JR Star logos, after permission was granted from his family. 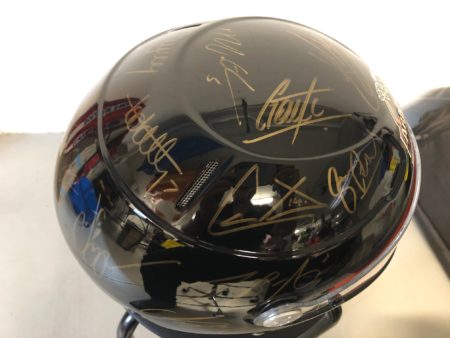 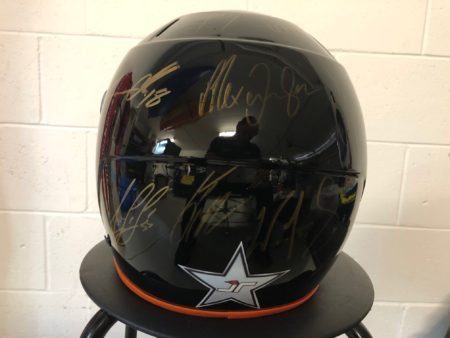 The first of these helmets was given away by Network 10 and Speedcafe.com during the telecast of the 2015 Sydney 500 event at Homebush.

The second was presented to then Armor All boss Paul Blair and the remainder was sold for charity and is part of a private collection.

This helmet has remained the property of Speedcafe.com founder and owner, Brett ‘Crusher’ Murray, who now offers it up with all proceeds going to Motor Racing Ministries.

The helmets were originally prepared by Matthew Gooley from MG Airbrushing on the Gold Coast.

“It was a pretty cool project to be involved in,” said Gooley.

“It was pretty amazing to have the signatures of so many great champions on one helmet.

“The end product looks pretty cool to this day.”

One hundred percent of proceeds from this very limited piece of Australian motorsport memorabilia will be going to Motor Racing Ministries because of a generous zero percent buyer’s premium from Lloyds Auctions, who are a valued Platinum Partner of Speedcafe.com.

This is the eighth monthly charity auction held in conjunction with Speedcafe.com to raise money for Motor Racing Ministries and is an extension of Lloyds Auctions’ incredible community commitment during the COVID-19 crisis.