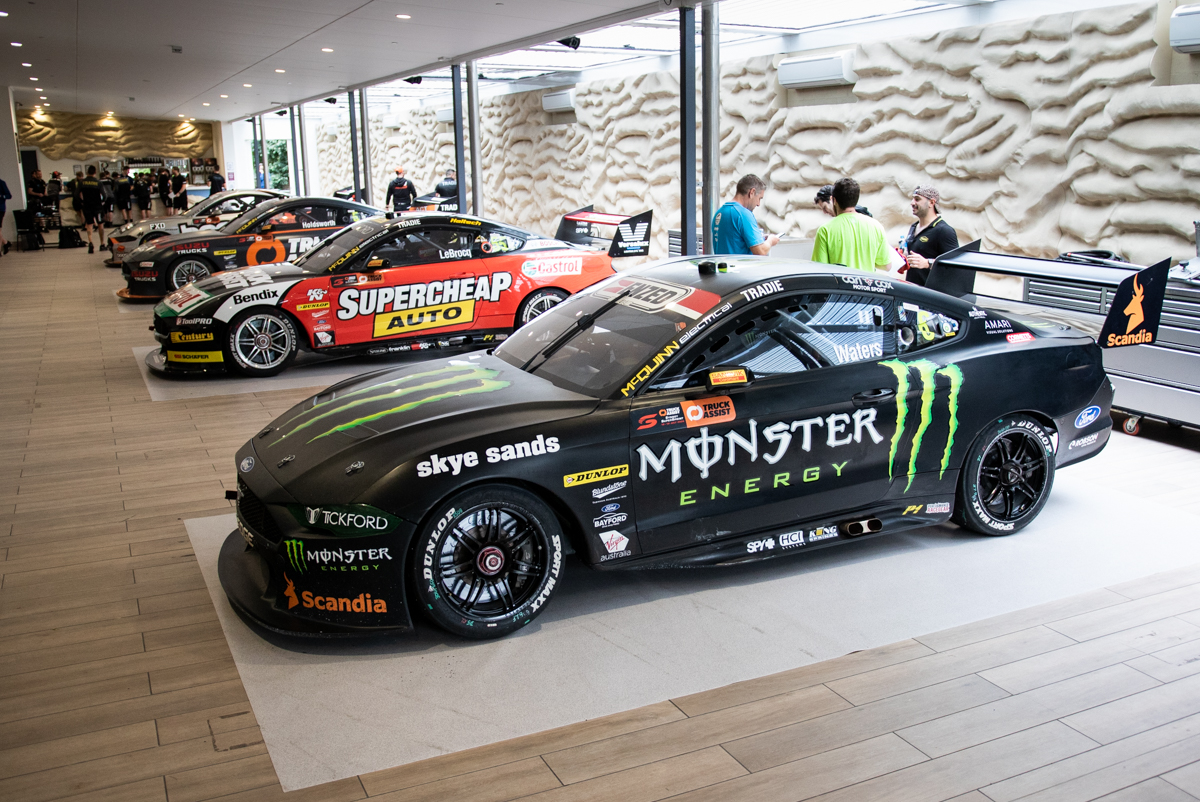 Tickford Racing has moved its four-car operation to Sea World Resort with the help of ShowTime Entertainment.

The group behind the stunt shows at Movie World and Sea World were on hand to help the Melbourne team move into its new digs on Wednesday.

The facility in which Tickford Racing will reside for at least the next two weeks is part of the Conference Centre at Sea World Resort.

With his waterski team on hand to help, ShowTime Entertainment Group boss Gary Reid said he was happy to see the move-in come together.

With the team relocated adjacent to the theme park, Tickford Racing will also feature in part of the Sea World Marine Park stunt shows.

“Our waterski team has been with them all morning helping out,” Reid told Speedcafe.com.

“They’re in awe of Supercars so they love that aspect of it, looking at the cars, seeing all the cars, and they’re excited to have two of the cars actually in the show.

“Me and Tim Edwards (Tickford Racing Team Principal) have talked a lot about doing some fun stuff like this but we never get a chance. For Gold Coast, they’re in and out.

“Now we’ve got them for two weeks in a resort so we can have some fun with them.”

While the facility is a far cry from the workshop the team is used to, Reid said the teams have enough equipment and space to maintain their cars.

“It’s a pretty unique workshop that they’ve got, it’s a fully tiled foyer of a convention centre,” he said.

“They’ve got every bit of equipment that they carry to the races. You’ve seen what they can rebuild at the track.

“We’ve got a network of businesses and a lot of close friends that are ready to help out if there’s anything needed.

“A credit to the other Supercars teams that are local that have reached out to all the teams if anyone needs anything, which is great, especially at this time when everyone needs to pull together and help each other out.”

Amid an uncertain time away from home, Reid said he’d be doing everything he can to make the teams feel at home.

“For me, it’s mainly just to give the guys a little bit of normality,” said Reid.

“It was a bit sad watching them this morning face-timing their families at home when we’re setting up for the media launch.

“A few of their kids were asking when they’re coming home. It’s tough on the teams but also tough on the extended families of everyone that’s here.

“We’ll just try and make it as normal as possible and get a few of them around to a normal home-cooked meal across the next two weeks.

“I’ll try and make it fun and enjoyable for them, get them to the theme parks, play a bit of Top Golf, it’ll be good.”

ShowTime Entertainment will also house Walkinshaw Andretti United at its Arundel facility on the Gold Coast.

CLICK HERE for a gallery of the temporary Tickford Racing workshop