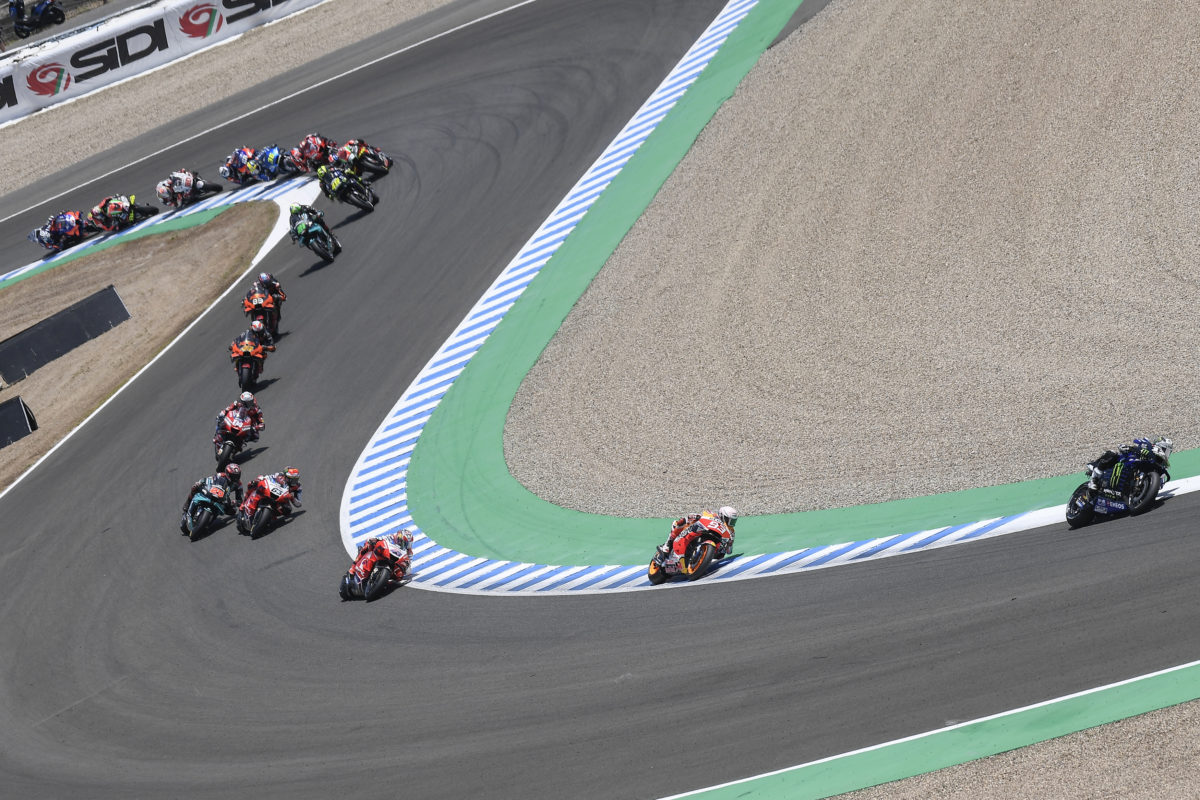 The MotoGP field in Jerez

Jack Miller has declared the 2020 MotoGP title race wide open as it becomes increasingly likely that Marc Marquez and potentially other heavy-hitters will drop more points due to injury.

Marquez is set to be operated on today in Barcelona (Tuesday, local time) after a shocking highside late in the season-opening Spanish Grand Prix.

The six-time premier class world champion was hit by his own Repsol Honda as he tumbled at Jerez, which appeared to cause what has been diagnosed as a ‘transverse diaphyseal fracture to his right humerus’ (upper arm).

MotoGP Traumatology Specialist Dr Xavier Mir, who will perform the surgery, has already stated that Marquez will miss at least this weekend’s second round, also at Jerez.

Mir is also due to operate today on Castrol LCR Honda’s Cal Crutchlow, who fractured a scaphoid (wrist bone) when he went down during the Warm Up and was declared unfit to race having taken a knock to the head.

Suzuki Ecstar’s Alex Rins also failed to start due to a shoulder injury, which MotoGP Medical Director Dr Angel Charte later identified as a fractured head of the humerus, incurred in a crash in Qualifying 2.

All told, the mishaps represent a serious chance that two factory riders and a Honda-contracted race winner in Crutchlow will fail to score points in multiple grands prix at the start of what could only be a 13-round season.

“It’s a shame for (Marquez), but it’s blown the championship wide open for the rest of us,” Miller told the In The Fast Lane podcast.

“Just points on the board yesterday (Race 1) is the key thing, I think.

“You know, with Rins out, him out, Crutch(low) out, there’s a lot of top guys there that aren’t scoring points here in the first couple of rounds, and with the season going to be as short as it is, it can pay in our favour later on in the championship.”

Miller’s comments approximately coincided with those of Dr Mir which cast doubt on Marquez’s participation even beyond the pair of Jerez races.

Dr Mir implied that the Spaniard is in danger of also missing the Czech MotoGP, which will take place on August 7-9 and be followed on consecutive weekends by two rounds at Austria’s Red Bull Ring.

“Marc won’t be at Jerez (this weekend) and the goal is for him to be able to run again at Brno,” he told Radio Catalunya.

“It is an injury of some importance. If the nerve is not affected, we will be able to stabilise the fracture and reduce the deadlines (for recovery).”

Miller, meanwhile, is content to simply accumulate points while riders are “green” from lack of riding in the early races of 2020, including the 13 he collected for finishing fourth in the Spanish MotoGP.

“I probably could have risked a little bit more, towards the end of the race, but I’d just done 23 laps in what I think is the hottest conditions I’ve ever ridden a MotoGP bike in, I was still in a good points scoring position, I wasn’t going to throw that in the bin,” he explained.

“I’ve done it too many times and it’s not much fun walking out of the gravel after you’ve put in nearly all the work and you get nothing for it.

SRT’s Fabio Quartararo leads the championship from future Yamaha Factory Racing team-mate Maverick Viñales and the Ducati Team’s Andrea Dovizioso after one round.

The next is officially the Andalucian Grand Prix, also at Jerez, from this Friday (July 24).