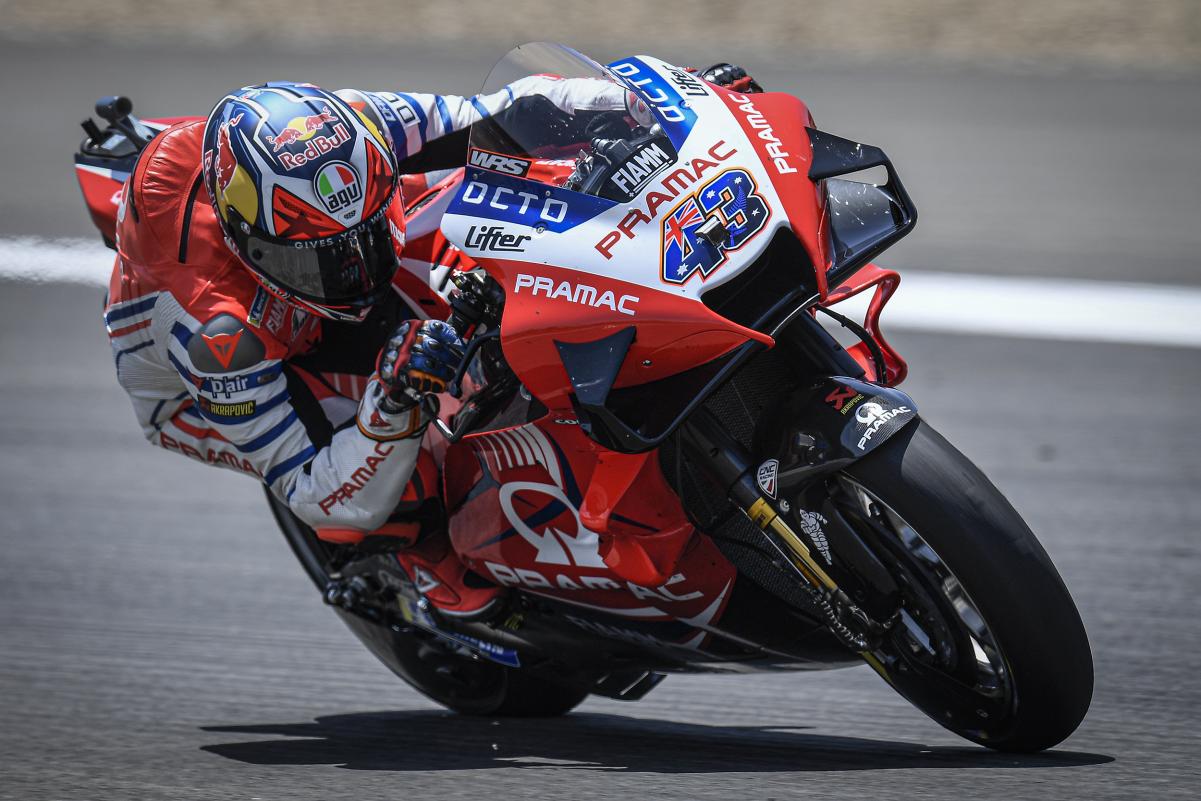 Jack Miller has revealed that he battled a numb right hand on his way to fourth in the MotoGP season-opener at Jerez.

The Pramac Ducati rider circulated in the top three for the most part until he was passed by factory counterpart Andrea Dovizioso on the penultimate lap of the Spanish Grand Prix.

Miller was satisfied with his own performance and also that of his Desmosedici on a circuit regarded as unfavourable to the Ducatis, although he did lament the loss of feeling in his wrist in the latter half of the 25-lap affair.

“We tried our best,” said the Queenslander.

“Sort of lost a little bit of feeling in my hand, I don’t know to do with what; more, I think, position on the handlebar. (That is) Something we can change, I think, for next weekend.

“Other than that, physically, I felt great on the bike, and the bike itself felt really, really good.

“I was just sort of trying to stick to my lines, not make any mistakes, and we did that, I brought home some solid championship points, and we move on to the next round here in Jerez, which is strange.”

While he came up two laps shy of a podium, Miller noted that he fared better than some of the championship’s leading lights in southern Spain.

Neither Alex Rins nor Cal Crutchlow made the start, while Marc Marquez broke his right arm as a result of a particularly awful highside, and Valentino Rossi failed to finish due to a technical issue.

“Starting the championship off like this is great; there’s a lot of key players that haven’t scored points today, and even a few other boys have (been) very lucky,” said Miller.

“I can happily say that I didn’t really have any big moments, anything like that. Sure, I felt the front sort of push a little bit here and there, but nothing like (Maverick) Viñales or Marc…

“Viñales had it at Turn 6 and Marc had it at Turn 4, so I was just following those guys, watching what they were doing, trying to stick to my own pace, and brought it home.

“In the end, I probably felt like I had a little bit to sort of take to Dovi, but this early on in the championship, I just thought better, I learned from my mistakes of the past, and just cooled my jets a little bit.

“There’ll be plenty more… This track itself, it’s not particularly been a favourite for the Ducatis in the past and to come away with third and fourth here, I think we can be pretty happy.”

Miller in fact had one of the better vantage points for Marquez’s lurid crash at Turn 3, having not long been engaged in a battle for third with the Spaniard.

“He’d just got past me and that kind of cost me a little bit of time as well, and allowed Dovi to close in on me,” recounted the Pramac rider.

“It was kind of a strange spot where he highsided; it was massive.

“To be honest, as I came through (Turn) 3, I just saw the absolute side of his bike – full Repsol, that’s all I could see – and I was like (gasps) hoping the bike wasn’t going to come towards me, kind of thing.

“I had to sort of avoid it and I really hope he’s okay.

“It’s taken its toll, this weekend, on a few of the boys so I hope they all can heal up as soon as possible and be back out there racing with us soon.”

The Andalucian MotoGP takes place at the same circuit this coming weekend.