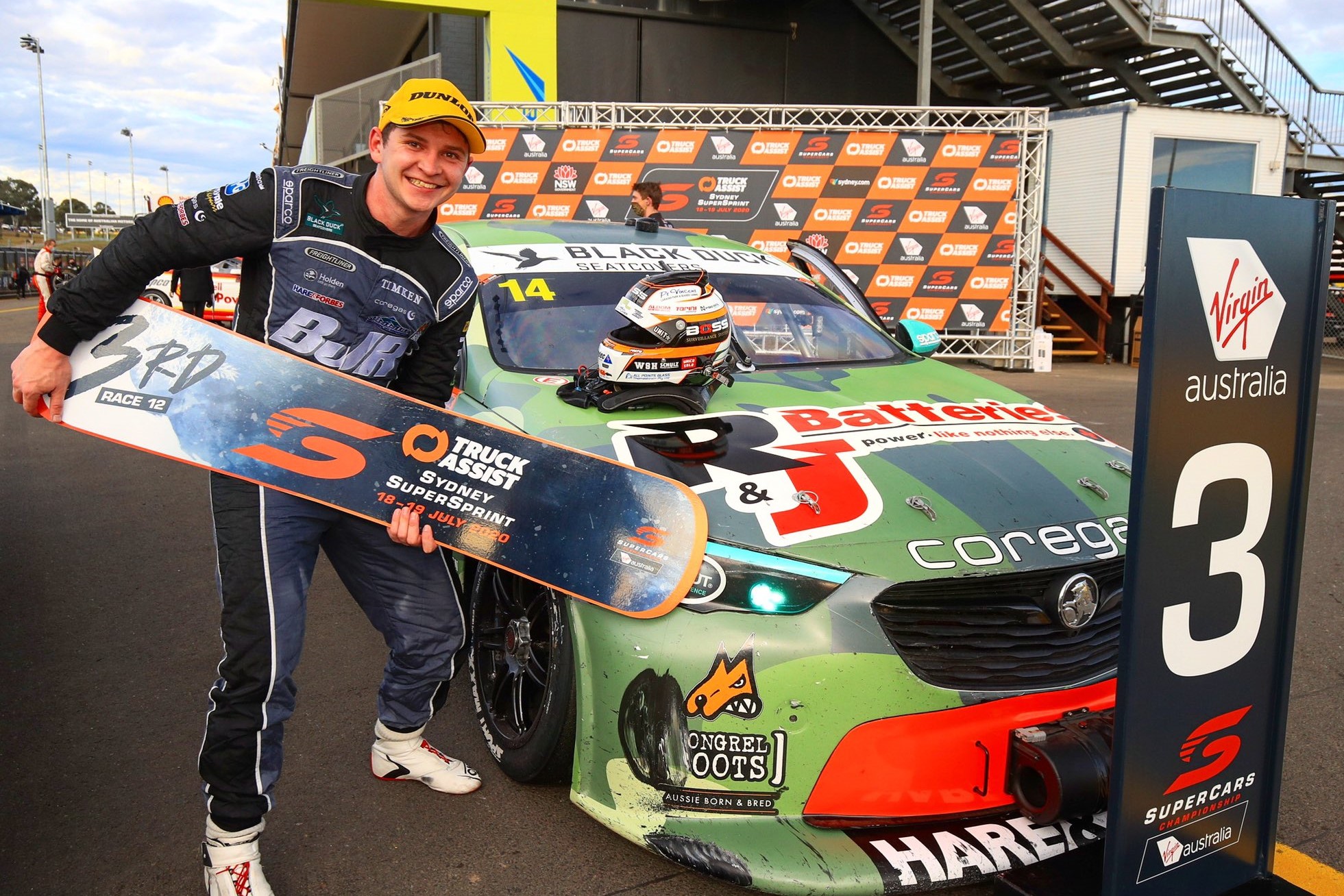 Todd Hazelwood has described his maiden Supercars podium as “very sweet” after a vibration issue in qualifying threatened to derail his weekend.

After qualifying 15th and coming through to 13th in Race 10 on Saturday at the Truck Assist Sydney SuperSpritnt, Sunday morning saw Hazelwood bogged down in the pit lane.

The 24-year-old failed to set a competitive lap time in Qualifying for Race 11 and duly started the race from last.

With the issue resolved, Hazelwood qualified in 12th for Race 12 of the season.

However, the Brad Jones Racing driver was left “frustrated” not to be higher up the grid while team-mate Nick Percat qualified near the top.

His frustrations were validated when Percat went on to win the race with an aggressive strategy that saw him run two sets of soft compound tyres.

With soft tyres in the bank, Hazelwood ran the soft-soft strategy for the final race of the weekend, storming through the field to challenge the leaders with a handful of laps to go.

Hazelwood said he was “riding a wave of emotions” after the morning’s dramas in qualifying.

“I was frustrated (on Sunday morning) because we knew we had good tyres after sacrificing (Saturday’s) result,” said Hazelwood.

“We had a fast car and Nick showed that but we had an issue in quali, we had a vibration issue which cost us badly.

“In Q1 we didn’t even get a lap, so I knew the car was fast but we had a lot of work to do and a few fast cars in front of us.

The move on Reynolds came after a frenetic fight for the lead, headed by Tickford Racing’s Jack Le Brocq, Kelly Racing driver Andre Heimgartner, and Reynolds.

As Reynolds sought to get by Heimgartner, Hazelwood saw an opportunity to slip down the inside at Corporate Hill.

“I was just looking for a hole and hoping it would stick,” said Hazelwood.

“He had a look at Andre which compromised him at the exit of (Turn) 6 and just got enough of a run out of (Turn) 7.

“We were all hurting on tyres at that point of the race, we were slipping and sliding everywhere and I just threw it in there at Corporate Hill.

“It was just enough to squeeze past and I was thankful to pull the move off.”

On fresher tyres, Hazelwood said he believes he might have been able to challenge Le Brocq for the race win if he had more time.

“Who knows what could have happened with an extra couple of lap,” he said.

“It would have been on, I reckon.”

The podium is a redemption of sorts after an anti-roll bar failure prevented him from making a similar charge through at last month’s BP Ultimate Sydney SuperSprint.

Last weekend’s Sydney event marked the first time in years Hazelwood hasn’t had his family alongside him due to the ongoing coronavirus pandemic.

The Victorian-based South Australian was among those to dash for the New South Wales border before it closed.

“Normally I’d have the whole family with me and it’s the first time my Mum missed a race meeting since 2005 in go-karts so it’s been a long time since I haven’t had at least member of my family alongside me,” said Hazelwood.

“It’s a little bit weird, to be honest, but I’m sure they’re riding the emotions with me. We wear our hearts on our sleeves to be in this industry.

“A lot of sacrifice and effort goes into what we do and when you get a breakthrough moment, it’s very sweet and very special.

“I’m just so fortunate I was given an opportunity this year to do what we’re doing.”