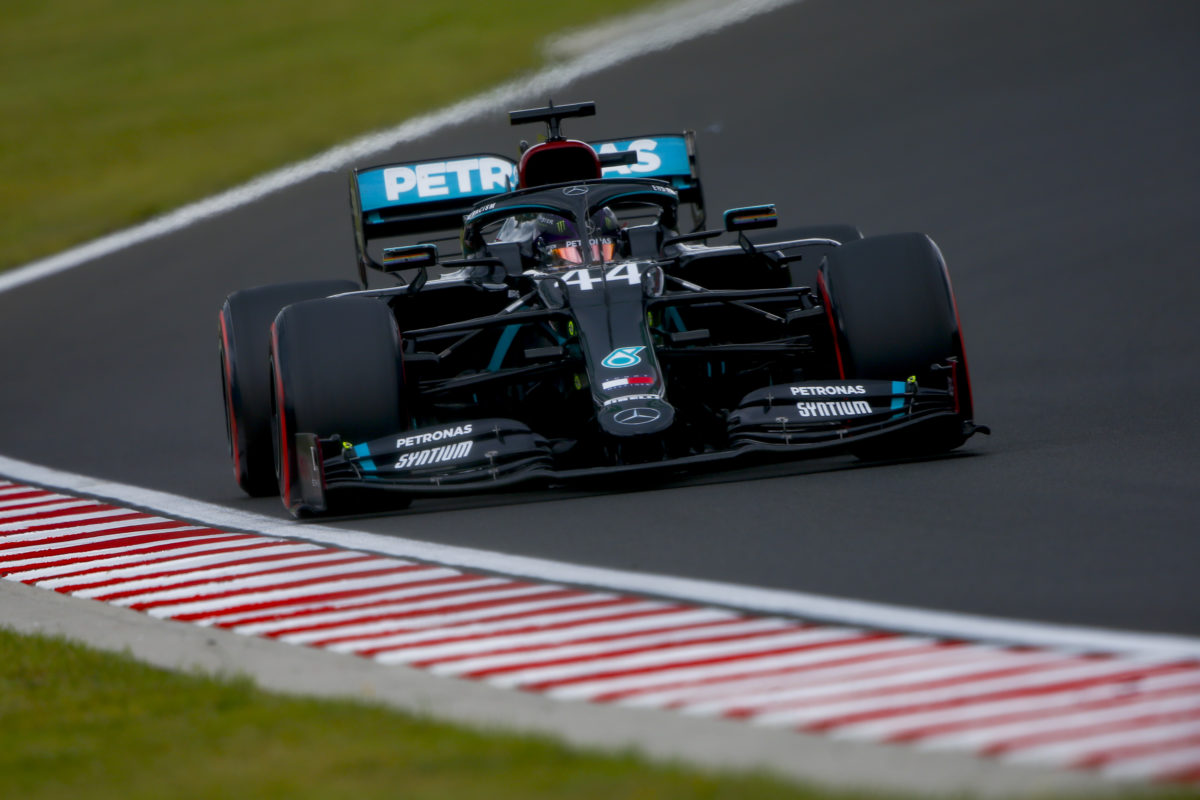 Lewis Hamilton survived changeable conditions early in the Hungarian Grand Prix to dominate the affair while Max Verstappen recovered from a pre-race crash to finish second.

Hamilton controlled the 70 lap encounter throughout, only ceding the lead briefly as he switched from intermediate tyres to slicks in the opening laps.

He headed home Verstappen, who survived a pre-race scare after crashing into the tyre barriers before the race had even begun.

Valtteri Bottas completed the podium after having to race his way back to the front of the race after a poor start saw him plummet down the order in the early stages.

Damp conditions greeted drivers for the race start, though conditions were close to the cross-over point from intermediate to wet tyres.

Much of the field were on the grooved inters, though both Haas drivers took to the lane at the end of the formation lap, Kevin Magnussen having initially elected for full wets.

On the grid, Hamilton made a strong start as Bottas found himself swamped by both Racing Points, both Ferraris, and Verstappen.

The Finn fought back against Sergio Perez around Turn 3 to reclaim one spot while out front Hamilton began edging away from Stroll who’d climbed to second off the line.

Verstappen quickly worked his way up to third at the start while Perez slipped from fourth to seventh.

In the pack, Daniil Kvyat headed for the pits at the end of the opening lap, having called for a switch to slick tyres while on the warm-up lap.

On Lap 2, Bottas and Charles Leclerc stopped, the pair both switching from intermediate to slick tyres.

Ferrari called Sebastian Vettel in from fourth a lap later, the circuit still damp in patches but quickly drying.

Ahead of him, Stroll also took to the lane as did race leader Hamilton.

The pit lane became a hive of activity, boxing Vettel in the Ferrari pit box as his crew was unable to find a gap in the traffic into which he could be released.

Verstappen stopped at the end of Lap 4, allowing Hamilton to regain control of the race in what was a busy opening stanza.

The biggest beneficiaries were the two Haas drivers, Magnussen and Grosjean climbing to third and fourth respectively after pitting at the end of the warm-up lap.

That became third and fifth when Stroll put a strong move on Grosjean at Turn 1 as they began Lap 7.

Bottas put a move on Leclerc at the same part of the circuit as they started Lap 10, his second attempt at the move which two laps earlier saw the Ferrari driver able to fight back and retain his sixth place.

Grosjean then fell victim to the charging Finn soon after, the Mercedes breezing by the Haas with the aid of DRS down the front straight.

After complaining about his engine during qualifying, and taking a new power unit ahead of the race, Pierre Gasly’s afternoon lasted just 16 laps before suffering an apparent Honda engine failure.

Having made short work of Grosjean, Stroll’s progress beyond Magnussen took rather longer.

It was only on Lap 17 that the Racing Point driver found a way through, Bottas quickly following suit to bump the heading Haas down to fifth.

At the bottom end of the top 10, Leclerc was a cork in the bottle ahead of Alex Albon, Vettel, Perez, Daniel Ricciardo, Carlos Sainz, and Kvyat all in tow.

After a handful of failed attempts, Albon finally got by Leclerc at Turn 1, the Ferrari driver not putting up much of a fight in ceding eighth place to the Red Bull.

Vettel went around the outside of Leclerc at Turn 3 a lap later, the German quickly stretching his legs over his team-mate who’d bolted on a set of soft compound tyres when switching from the inters in the opening laps.

The Monegasque dropped three seconds in a lap to Vettel and was forced to fend off Perez, Ricciardo, and Sainz who clearly had more pace.

It left the team with little choice but to call him in, switching to a set of hard compound tyres with 49 laps to run.

Vettel took his second stop after 30 laps, pitting out of a queue of cars behind Grosjean for a set of hard compound tyres.

Bottas took his second stop on Lap 34, Mercedes replacing his medium compound tyres with another set of the yellow walled rubber.

Though in battle with Bottas, Racing Point did not react immediately. It proved costly for Stroll, who stopped on Lap 36 and lost out to Bottas who’d by then had two laps on his new boots to leapfrog the Canadian.

Red Bull did react, stopping Verstappen at a time when Bottas was circulating three seconds a lap faster, covering off the immediate Mercedes threat.

Unchallenged out front, Hamilton stopped on Lap 38 for what would be his final stop, at a time when a light mist of rain began to fall.

The worst of the weather avoided the circuit, and that which did fall was insufficient to force a strategic rethink.

Ricciardo pitted from fifth on Lap 45, switching to the medium compound tyres for his 25-lap run to the flag, rejoining between Magnussen and Leclerc in ninth.

Looking for the undercut in his battle with Verstappen, Bottas stopped on Lap 50 and had a set of hard compound tyres fitted.

It dropped him more than 22 seconds back from the Dutchman but with much fresher tyres than the second placed runner.

Unrivalled out front, Mercedes pitted Hamilton from the lead in the closing laps for a fresh set of soft tyres.

It allowed the six-time world champion to attack in the closing laps, and potentially snag an extra point for Fastest Lap.

The stop came on Lap 67 of 70, concerns about graining seeing the move delayed as late as possible to cover off any threat from Verstappen.

The gap between the front two was nearly six seconds as Hamilton rejoined, while Bottas was charging in third as he reeled off a series of fastest laps.

On Lap 68 Hamilton claimed the fastest lap to lay his claim for the bonus point and steal it away from his team-mate.

As they started the final lap, Bottas was locked on to the rear of Verstappen.

Not close enough to make a move into the first turn, and with precious few other opportunities to make a move further around the lap, he was forced to shadow the Red Bull to the chequered flag.

Hamilton claimed victory by 8.7s from Verstappen, who was little more than half a second clear of Bottas.

Stroll claimed fourth for Racing Point with Albon fifth ahead of Vettel, Perez, Ricciardo, Magnussen, and Sainz rounding out the top 10.