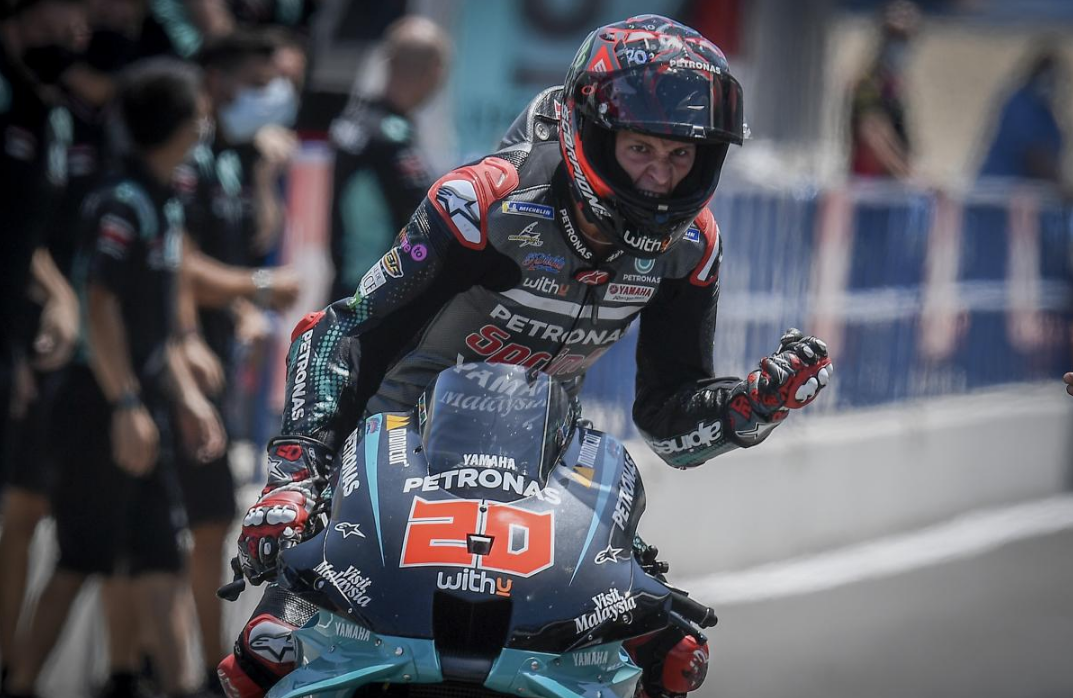 Fabio Quartararo has ended France’s long wait for a new premier class winner with a maiden MotoGP win at the Spanish Grand Prix.

Over four months on from the cancelled Qatar season opener due to the COVID-19 pandemic, the Petronas Yamaha SRT ace opened his winning account in the premier class.

The result marks the first French winner in the premier class since Regis Laconi at Valencia in 1999 – the year Quartararo was born.

The 25-lap thriller featured a topsy-turvy performance by reigning world champion Marc Marquez who, after recovering from an early off at Turn 4 to fight back to the lead pack, crashed heavily at the same corner in the closing laps.

Maverick Vinales (Monster Energy Yamaha) hit the lead off the line with a strong holeshot ahead of Marquez and Quartararo, who was pushed down to fourth by Jack Miller (Pramac Racing) at the hairpin.

On the fourth lap, Marquez cleared Vinales and attempted to create a gap, only to bowl a wide at Turn 4. The Repsol Honda rider managed to remain upright with a stunning save, but dropped to last place.

Vinales regained the lead and Quartararo made it a Yamaha 1-2 on Lap 6. By the next lap, Marquez’s comeback was well and truly underway, with the Spaniard having already climbed six places to 12th after falling to 18th following his Lap 5 mistake.

Vinales began to struggle and the pace slowed in the lead pack. All the while, Marquez picked off rider after rider, and when Vinales overcooked it heading into the final corner on Lap 9, Quartararo was back in the lead.

Quartararo began to check out at the front, with the gap to Miller – who had also picked off an ailing Vinales – out to four seconds with eight laps remaining.

However, after a tight battle with the Australian, Marquez again fell foul at Turn 4, suffering a shocking highside and being loaded into an ambulance wearing a neck brace.

From there, Quartararo was never headed, the 21-year-old beating Vinales to the flag by 4.603s with Dovizioso ousting Miller for the final podium placing.

However, all smiles were reserved for Quartararo, who couldn’t hide his emotions having fallen short of victory several times in a breakout 2019 season.

“F***ing hell, the best moment of my life for sure,” an exhausted Quartararo told the broadcast after the race.

“It feels so strange to race without the fans, obviously I would love to cheer with them.

“This race was for them, for all the people affected by COVID, and for my family and brother always supporting me, and my parents.”

The season will remain at Jerez with the second round, the Gran Premio Red Bull de Andalucia, to be held next week.