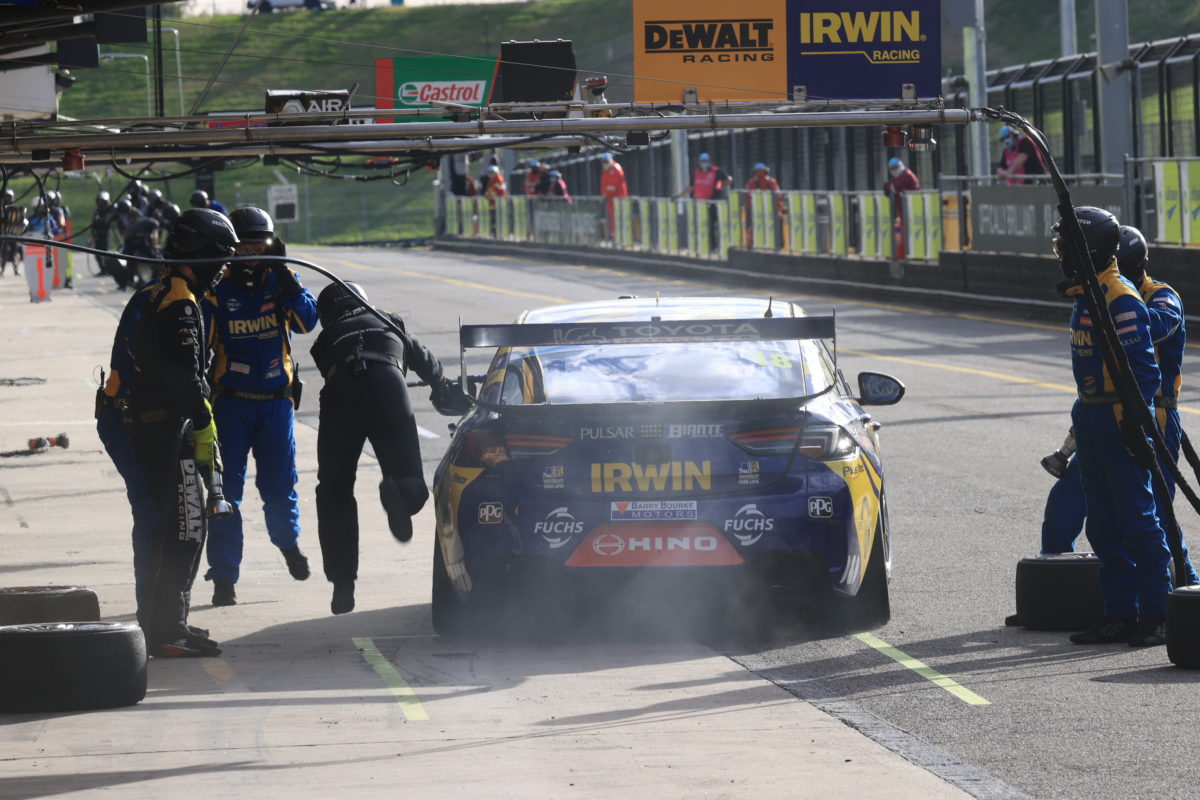 Team 18 has been fined and docked 30 teams’ championship points after Mark Winterbottom exited his pit box with the air spike still attached during Supercars Championship Race 12.

Winterbottom pitted from fourth position on Lap 10 of the Truck Assist Sydney SuperSprint finale and the spike was still attached when he attempted to drive the Irwin Tools ZB Commodore away after taking service.

The hose was torn loose as a result, while Winterbottom pressed on and ultimately finished the 32-lap encounter in sixth spot after being overtaken late in the piece by team-mate Scott Pye.

Team 18 has been fined $1500, with half suspended until the end of the year, in addition to the sporting penalty.

“A post-Race investigation was conducted into an Incident which had occurred during Car #18’s Pit stop when the air spike hose remained connected to the Car after Car #18 had been dropped and released from its Pit Bay,” read the stewards summary.

“The air spike attendant had attempted unsuccessfully to free the air spike after Car #18 had driven away with the result that the air hose was torn away.

“Rule D11.7.3 mandates that a Car must be completely free from all hoses and equipment before leaving its Pit Bay.

“The Team, Chasports Racing, admitted to a breach of that Rule.

“The Stewards were satisfied that the Driver of Car #18, Mark Winterbottom, was entitled to assume that the Car was free of all equipment because the Car could not have dropped unless the air spike had been pulled.

“The Stewards imposed a Penalty of the Loss of 30 Teams Championship Points on Chasports Racing and a Fine in the sum of $1,500, of which $750 is suspended until 31 December 2020.”

Team 18 remains ninth in the teams’ championship, but has lost ground to Kelly Racing having originally only been two points behind the new Ford squad at the end of Race 12.

It was also among three teams fined due to use of motor vehicles during track walks at Sydney Motorsport Park on the Friday.

Team 18, Erebus Motorsport, and Triple Eight Race Engineering were all slapped with $1000 penalties, of which half is suspended until June 30, 2021.

“The Stewards imposed Fines on each of Chasports Racing, Erebus Motorsport and Triple Eight Race Engineering in the sum of $1,000 (of which $500 is suspended until 30 June 2021) for breaches of Article 12.1.1.h of the FIA International Sporting Code after receipt of a report that each Team had Drivers circulating the race track in motor vehicles during the Track Walk session on Friday 17 July,” stewards advised.

“The Teams had not sought nor been granted permission to use motor vehicles on the circuit during the Track Walk.

“Albeit that circuit lighting was activated at the time, there were a number of Drivers and Team personnel of other Teams walking the track and Event operational staff were on the circuit undertaking works.

“Notwithstanding that none of the vehicles concerned were reported to be travelling at high speed, the Stewards considered the conduct of the Teams to represent an unsafe act resulting in an unsafe situation.

“Each Team admitted to the breach.”

Team Sydney drivers Chris Pither and Alex Davison were each also fined $500, half suspended until year-end, for being late to the drivers’ briefing.

In racing matters, Scott McLaughlin was found to not be in breach of rules when he made contact with the rear of Lee Holdsworth’s car during Race 12.

McLaughlin’s #17 Mustang had touched the rear of Holdsworth’s #5 Mustang as they exited the Turn 8 Hairpin on Lap 22, causing the Tickford Racing driver to squirm and briefly leave the road as he lost 13th position to the championship leader.