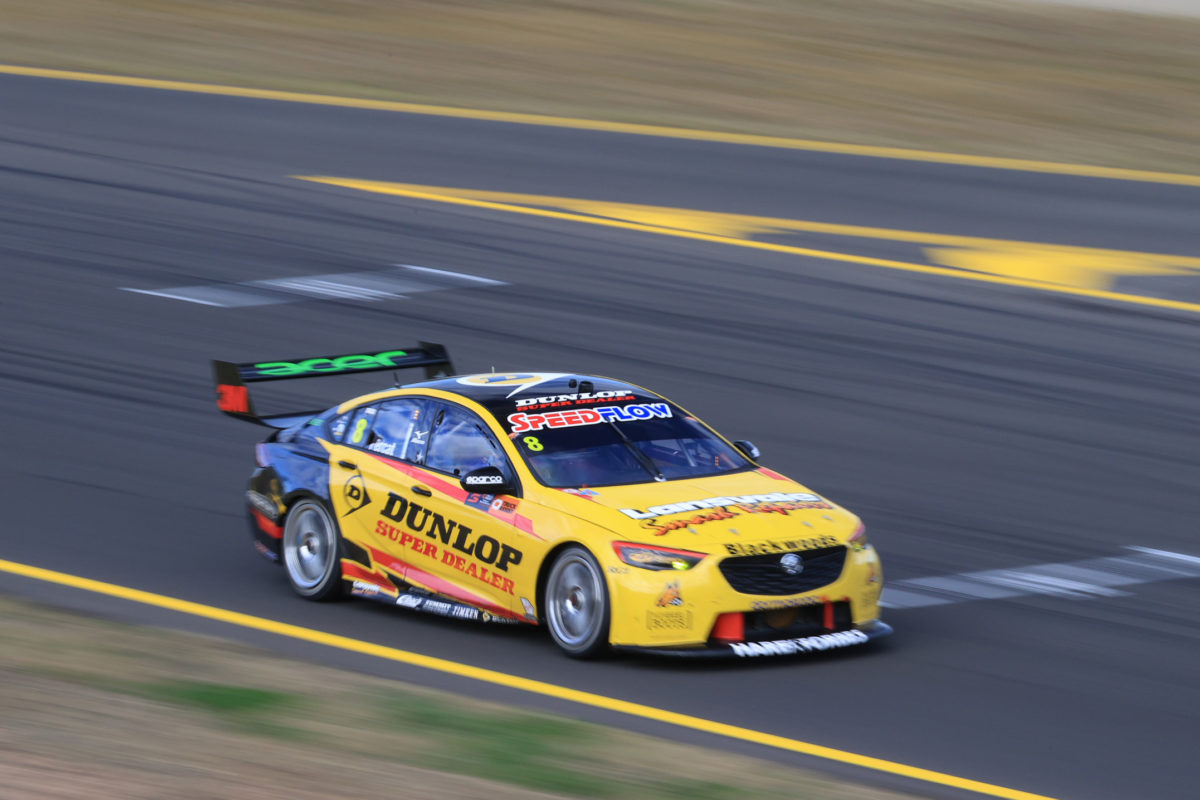 Nick Percat has bagged another victory with Brad Jones Racing while Scott McLaughlin nabbed a podium right at the end of Supercars Race 11 at the Truck Assist Sydney SuperSprint.

As they did three weeks ago at Sydney Motorsport Park, Percat’s camp opted to maximise their chances in the early Sunday race, using Car #8’s two sets of soft compound tyres throughout the 32-lapper.

It meant that the Dunlop Super Dealer ZB Commodore ran second for most of the opening stint and assumed a tidy lead once the pit stops had shaken out, while Fabian Coulthard had a lonely run home to second position in the #12 Shell V-Power Mustang.

The battle for the minor placings, on the other hand, came alive in the final laps as McLaughlin (#17 Shell V-Power Mustang) mugged James Courtney (#44 Boost Mobile Mustang) for third at the finish line and Chaz Mostert (#25 Mobil 1 Appliances Online ZB Commodore) did likewise to Rick Kelly (#15 Castrol Mustang) for fifth.

They again ran side-by-side through Moffat Corner (Turn 1) before van Gisbergen outbraked the #17 Mustang on the outside at Bond Bend to take the lead.

Percat got past Coulthard, both of whom had started on the softs, at Turn 4 on the standing lap but needed until Lap 3 to overtake McLaughlin, at Bond Bend.

Once he did, the BJR driver made like work of the second-plus margin which van Gisbergen had established, catching Car #97 by the end of the following lap.

Percat twice had looks at van Gisbergen at Brock’s 05, while Coulthard and Kelly ran in close quarters having also passed McLaughlin on Lap 3.

Courtney, who did not use any soft tyres in Race 10 on the preceding night, was meanwhile on a charge which saw him relieve McLaughlin of fifth spot on Lap 6.

Coulthard was having to play defensive to Kelly by the time he pitted on Lap 11, as did Courtney, and both remained on soft tyres.

Percat had just been issued a bad sportsmanship flag for track limits by the time he pitted from around a second back from van Gisbergen at the end of Lap 12.

He took another set of soft tyres, which had reportedly done two qualifying runs, while Kelly remained on softs having also stopped on that lap.

They resumed in 12th and 15th respectively, with Coulthard and Courtney between, while McLaughlin was in for service a lap later and emerged about 4.5s behind Kelly but with soft tyres on Car #17.

When Mostert and Cameron Waters (#6 Monster Energy Mustang) peeled off from second position on consecutive laps, Percat was back up to second and trailing van Gisbergen by a bit over 38 seconds with 14 laps remaining but a stop in hand.

Those top six were all on the soft compound while the former race leader, who had been 29.7s up on Car #8 as he filed into the lane, resumed in seventh with used hards on #97.

Rounding out the top 10 at that point, all on softs, were Jack Smith (#4 SCT Logistics ZB Commodore), Mostert, and Waters.

Percat continued to drive away and was at one point more than nine seconds clear of Coulthard, with 8.8746s the official margin of victory.

“We knew our long tyre pace was good so I tried to force the hand of Triple Eight because I thought they were going to play the soft-soft game and I said ‘you know what, you can try to pass me now because I’ve had a crack at you for 10 laps,'” recounted the race winner.

“Yeah, it was mega. Credit to BJR, Brad (Jones, team owner), AE (Andrew Edwards, engineer), and everyone there. They back the way I look after a tyre so we can do a strategy like that. It was good fun.”

McLaughlin was under the rear wing of Car #15 with around half a dozen laps to go and was still there by the time Kelly reached the back of Courtney’s #44 machine on the penultimate lap.

Mostert was also into the battle on the very last lap, when McLaughlin went for a pass as they swept around Corporate Hill and Kelly ended up bouncing on the edge of the track.

McLaughlin still had time to try a move on Courtney, who he edged by 0.0247s all told, and Mostert pipped Kelly by 0.1441s in a similar drag race just behind.

Jacobson took seventh while van Gisbergen, who ceded his position to Mostert with a minimum of fuss on Lap 26, was home in eighth.

Whincup qualified 19th, spent the first stint largely outside the top 20, and brought the #88 ZB Commodore to the finish in 17th, on hard tyres throughout.

It means that he now trails McLaughlin by 125 points at the head of the Virgin Australia Supercars Championship standings.

The final race of the weekend is scheduled for a start at 14:50 local time/AEST.