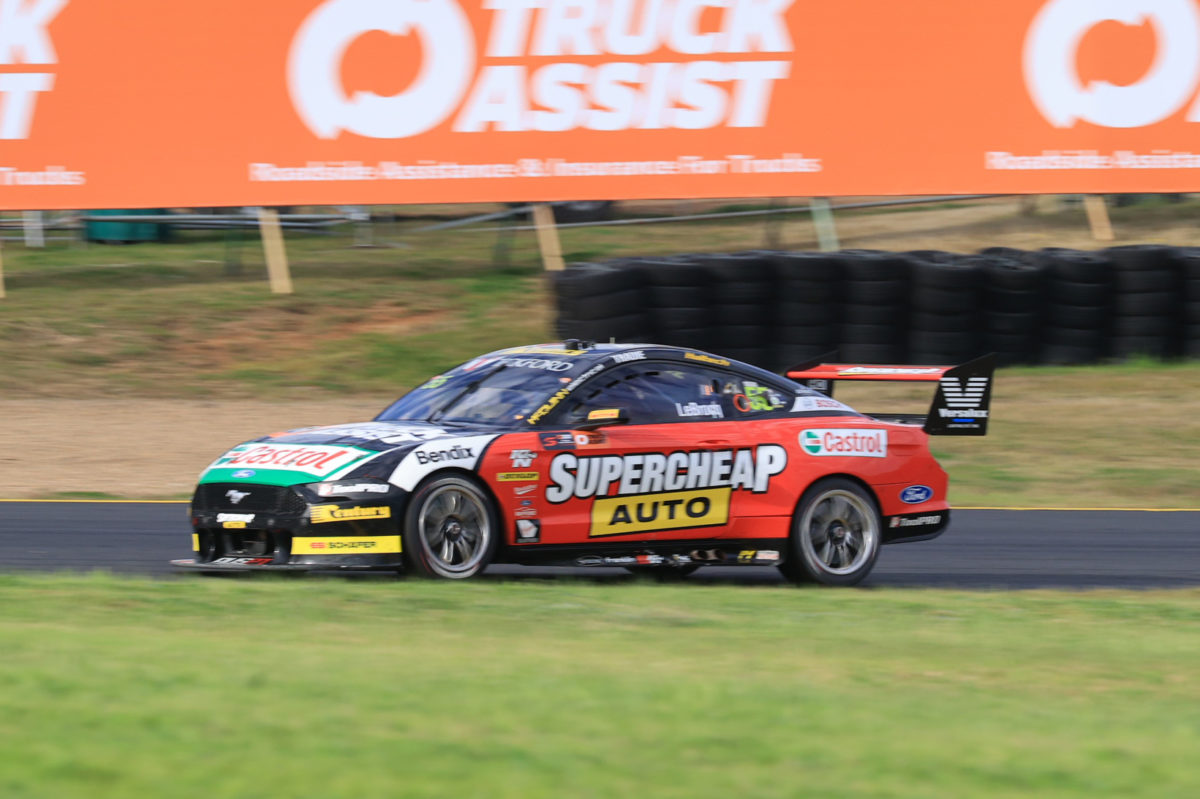 Jack Le Brocq has become a Virgin Australia Supercars Championship race winner after a four-way fight for victory at the end of Race 12 at the Truck Assist Sydney SuperSprint.

Behind the Supercheap Auto Mustang, Andre Heimgartner was second from a maiden pole position in the #7 Ned Whisky Mustang, and Todd Hazelwood took a maiden podium by passing David Reynolds on the final lap.

A hard-shod Whincup (#88 ZB Commodore) got the better launch from the outside of the front row but Heimgartner, on softs, was able to recover ground and wrest back the advantage through Bond Bend (Turn 2).

Whincup instead found himself rapidly demoted to fourth, by Reynolds (#9 Penrite ZB Commodore) and then Mark Winterbottom (#18 Irwin Tools ZB Commodore), who also had the softer rubber on.

Le Brocq had started seventh with soft tyres on the #55 Mustang and was showing strong pace early on, taking McLaughlin (#17 Mustang) for fifth on Lap 2 and then Whincup for fourth on Lap 3, both times at Turn 4.

Four laps later, the Tickford Racing driver pulled the same move on Winterbottom, and remained there until he was called into the pits on Lap 11, a bit over five seconds from the lead, to take another set of softs.

Heimgartner and Reynolds peeled off a lap later to do likewise, at which time they were 2.7s apart, and were split by Le Brocq when they rejoined in 10th and 12th respectively.

Heimgartner’s cold tyres, however, left him vulnerable and #55 picked off the pole-sitter at Turn 4 to move into the effective lead of the motor race.

Hazelwood (#14 Brut ZB Commodore), who had saved his best rubber for the weekend finale, had by then inherited the lead before stopping on Lap 15 and emerging ninth on the road but an effective fifth.

Van Gisbergen (#97 ZB Commodore) was last to make his compulsory pit stop, at the end of Lap 17, by which time he had already dropped to third on the road, and took on another set of hard tyres.

McLaughlin, who had been roughed up on his descent towards the back of the top 20 before he could get rid of badly worn soft tyres, was 13th at that point on hards, and van Gisbergen 21st.

The DJR Team Penske Fords swapped spots with around a dozen laps to go when Coulthard got by McLaughlin, and #12’s progression continued by going underneath Lee Holdsworth (#5 Truck Assist Mustang) for 12th at Turn 6 on Lap 22.

Holdsworth and McLaughlin tangled on exit two corners later, the former almost spinning across the nose of #17 but managing to catch the moment for just the loss of 13th position.

While that was going on, Hazelwood had run down Winterbottom and Pye then got his Team 18 team-mate for fifth at Bond Bend with just under five laps remaining.

Le Brocq looked to have shaken Heimgartner until the top three closed up on Lap 29 of 32, and Hazelwood caught the train on Lap 30.

The quartet started the final lap covered by just 0.7522s and Heimgartner had to block Reynolds through Brock’s 05 and Turn 6.

Hazelwood, however, was able to pull alongside #9 and make the move as they swept around Corporate Hill in a battle which was a reprieve for Le Brocq, who victory by 0.6213s.

Heimgartner was just another 0.1910s ahead of Hazelwood, with Reynolds and then Pye completing the top five.

“It hasn’t really sunk in yet so I don’t know what to feel at the moment,” said Le Brocq.

“That’s unreal, the guys at Tickford have given me an awesome car and given me the opportunity to try and prove that we can do the job so I’m over the moon.

“Thank you to everyone that got us here and Andre kept us honest there the whole time so it was pretty cool.”

Winterbottom’s entry is, however, under investigation after he left his pit box with the air spike still attached.

Race 11 winner Percat was 11th in Race 12, ahead of van Gisbergen, Coulthard, McLaughlin, and Holdsworth.

McLaughlin’s championship lead is a reduced 107 points over Whincup on the way to the BetEasy Darwin Triple Crown at Hidden Valley Raceway on August 8-9.