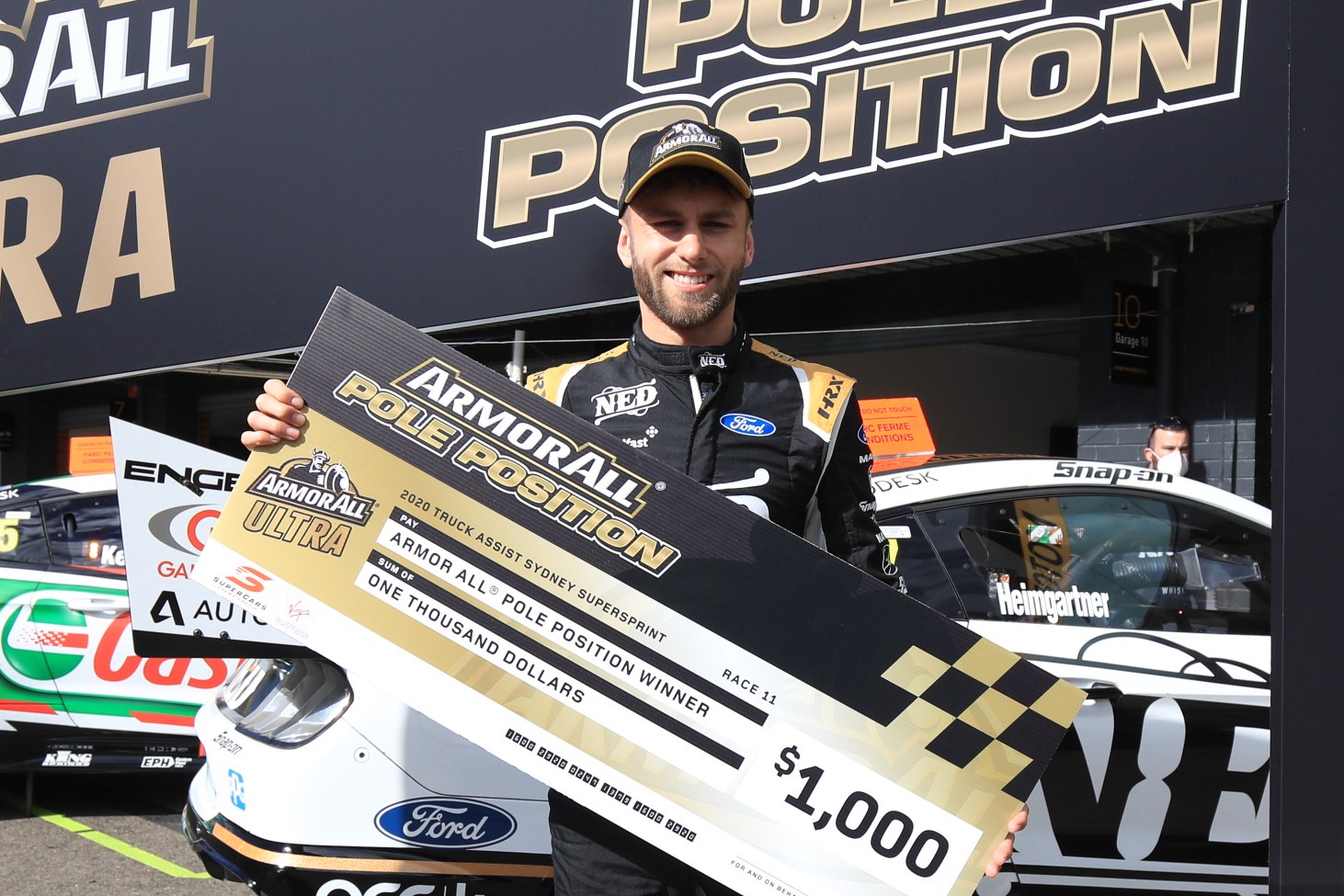 Heimgartner took a conservative approach on Day 1 of the Truck Assist Sydney SuperSprint, saving the best of his soft compound tyres for Day 2.

It was a move that ultimately paid dividends, recording the fourth fastest time in Qualifying for Race 11 and then claiming pole position for Race 12 just minutes later.

An inspired decision to set a time early in the second qualifying session of the morning saw the 25-year-old set a time almost identical to Race 11 pole position getter Scott McLaughlin.

While the rest of the field sought to best the Kiwi, none could top the time set by Heimgartner.

“It’s amazing after yesterday when we were really struggling,” said Heimgartner.

“Last time we were here we were really struggling as well so we went away, had a big think about it, and the boys worked incredibly hard throughout all this stuff and especially overnight we managed to find almost seven tenths just tuning the car.

“We weren’t quite happy with how it was yesterday and we changed a bit for today so here we go. I’m really happy and it’s amazing to get it here to boost everyone’s confidence in the team when we’re on the road.

“Overall we’re really happy with that and I’m really looking forward to the race,” he added.

“First pole position, it’s awesome to get that.”

In the lead up to the 2020 season, Kelly Racing downsized its fleet from four cars to two.

The team also transformed its two-car operations from Nissan Altimas to Ford Mustangs, developing a new engine package to suit.

In the rush to rebuild the team, both Heimgartner and Rick Kelly’s cars have carried extra weight in the engine bay.

The team had been hoping to carry out engine block lightening, however, a sudden move from Victoria to New South Wales put paid to those plans.

With the team on the road for an uncertain period, Heimgartner said the pole position effort was a major boost for the team.

“As we all know this COVID thing is pretty tough, having to be away from our families,” said Heimgartner.

“There’s a lot of kids that the guys have so to be away from them is very tough.

“When you’re here and not getting results it makes it even tougher, so to put a smile on their face and get pole position, I think that’ll give everyone a big boost.

“We’ve got two weeks after this that we have to be in Queensland and we’ll enjoy that even if we don’t get a result today. We’ll be gunning for a win or a podium.”

The New Zealander is well placed for Race 11 and Race 12 of the season with relatively new soft tyres in the bank.

“We ran hards all yesterday so we’ve got plenty of softs to go for today,” he said.