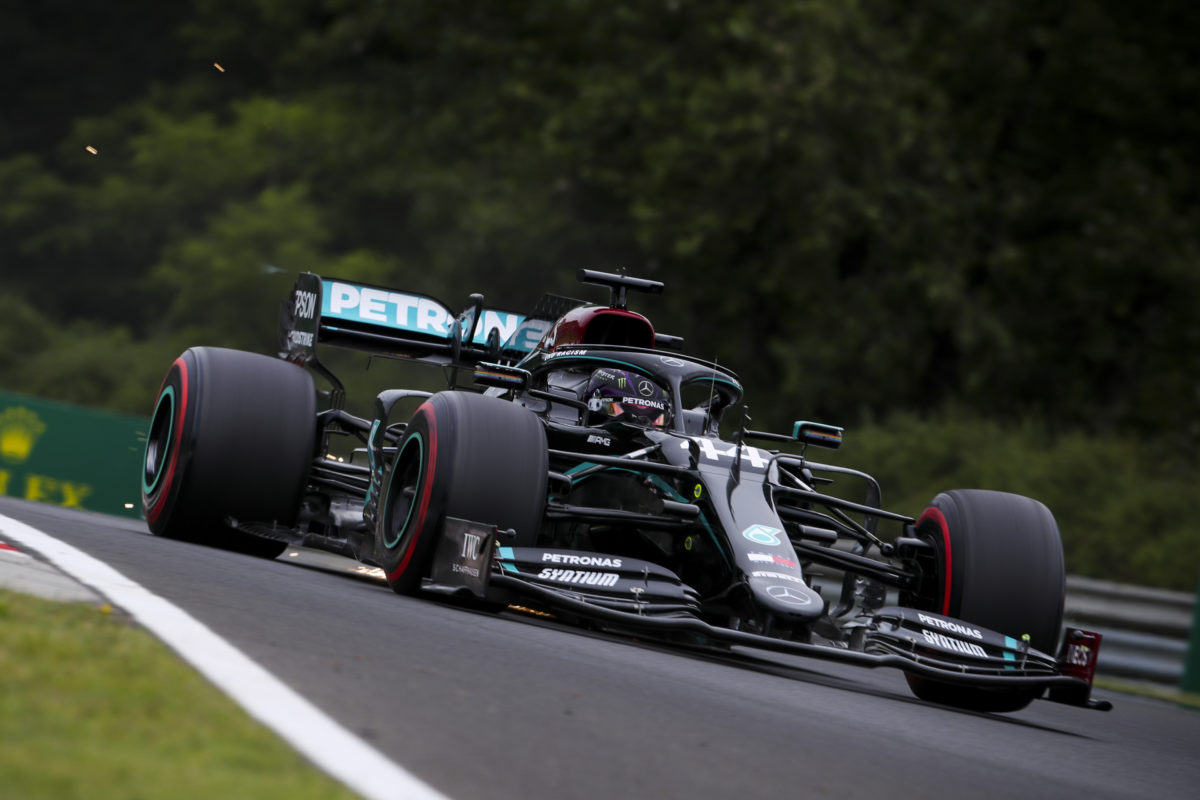 Lewis Hamilton has claimed pole position for the Hungarian Grand Prix with a stunning lap in a session that saw Racing Point star.

Hamilton, whose result saw him record his 90th F1 pole position, was just over a tenth faster than his Mercedes team-mate when it mattered while Lance Stroll headed an all-Racing Point second row.

Daniel Ricciardo found himself eliminated from the session at the end of Qualifying 2, while Max Verstappen could do no better than seventh.

The threat of rain saw many of the sport’s heavy hitters queued at pit exit as the three-part session got underway, headed by Verstappen and Hamilton.

Offset from the bulk of the field were the two Renaults, which remained in the garage, as did Pierre Gasly and Kimi Raikkonen.

Verstappen was therefore the first to set a time, 1:16.136, though it lasted only a matter of seconds before Hamilton went half a second faster.

Bottas, third on the road, went faster still, 1:15.484 for the Finn while Stroll slotted into third and Perez fourth for the Racing Points in a busy opening to the session.

As the bulk of the field was completing their first timed laps the Renault duo headed out on track.

Ocon slotted into eighth with his first lap, Ricciardo 1.25s off the outright pace in 12th just as light spots of rain began to fall.

On his second lap, the Australian improved to sixth best with a 1:16.111, two tenths quicker than Ocon had managed on his second effort.

With five minutes to run in the opening phase of the session Gasly reported a “big problem” with the engine in his AlphaTauri.

The Frenchman sat 12th at the time, just over a tenth clear of the drop zone.

Gasly, who had remained on track, climbed up the order to sixth to push Ocon to 15th.

The leaderboard began to change rapidly, with Perez and Stroll shooting to the top of the totem over the Mercedes pair and Russell.

A snatched brake from Vettel under braking for the opening turn on his final lap cost the Ferrari driver nearly half a second in the opening sector alone.

Sitting in 13th as he begun his lap, he still managed to improve to fourth, such was the improvement in track conditions.

Such was the evolution in conditions that Verstappen had been 15th as the chequered flag fell, though he completed a final lap to climb to eighth.

Like the opening phase had been, it was a busy start to Qualifying 2 as concerns about the threat of rain lingered.

The Renaults, Mercedes, and Racing Points all opted for medium compound tyres for their first timed runs, the remainder out on the faster softs.

Hamilton managed a 1:14.261 with his first lap to rise to the top, more than 0.9s faster than Norris had set as the benchmark moments earlier.

Perez and Stroll sat seventh and eighth after their first timed laps as they tried to progress through to Qualifying 3 while starting Sunday’s grand prix on the better ‘race’ tyre.

Gasly’s engine concerns remained, reporting he felt like he was ‘destroying’ the engine only to be told nothing could be done.

Having been caught at the weigh bridge, Stroll was unable to refire his car forcing his Racing Point crew to run up the pit lane to retreive him with just four minutes left in the session.

The Canadian was seventh in the standings at that point, being returned to the garage just as the field streamed out on track for their final flying laps.

For the Racing Point duo, that saw them head out on medium compound tyres in a show of confidence in the RP20.

As the chequered flag fell Norris rose to third fastest while Perez was unable to improve on his earlier effort.

Leclerc’s late lap demoted Ricciardo out of the top 10, and Albon was just 13th for Red Bull.

Russell ended his session 12th with team-mate Latifi in 15th, while Gasly did make the grade despite the concerns over his Honda power unit.

He took no further part in the session as the team put his car on jack stands prior to Qualifying 3 beginning.

Stroll was the first driver to set a time as on track action got underway, with a 1:14.671, a time 0.6s faster than Vettel could manage moments later.

The Racing Point’s time didn’t stand for long as Hamilton set a new track record with a 1:13.613, 0.3s better than even Bottas could muster on his first timed effort.

Back in the garage, Verstappen quizzed his team ‘that’s it for us, right?’ as mechanics hastily fitted cooling to the sidepods of his Red Bull.

He would get back on track, though his hopes blunted somewhat as he headed out with scrubbed tyres for his final flying lap.

Vettel pushed hard on his second lap, his first having been only good enough for seventh, to improve his own time but not challenge the top of the leaderboard.

He slotted in fourth, 1.161s off Hamilton’s pace, a time more or less matched by Leclerc in the second Ferrari who slotted in fifth.

Perez and Stroll ran off sequence, completing the final flying laps with two minutes remaining, the pair provisionally locking out the second row of the grid.

Verstappen could do no better seventh ahead of Norris and Sainz, while Gasly remained in the garage throughout to end the session 10th.

It left Stroll third ahead of Perez in an all-Racing Point second row, with Vettel fifth and Leclerc sixth for Ferrari.

Mercedes and Racing Point with have both of their drivers start Sunday’s race on the medium compound tyre while the remainder of the top 10 will start on softs.

The Hungarian Grand Prix gets underway at 23:10 AEST.