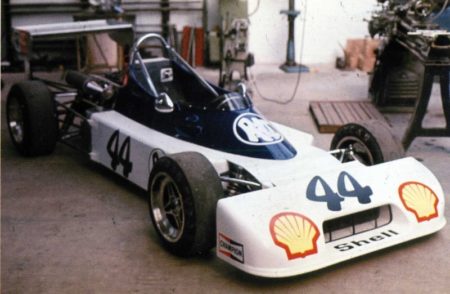 Larry Perkins has recounted how a discussion over a used car in Melbourne led to him being Ron Tauranac’s first employee at Ralt.

Having sold out of Motor Racing Developments in 1972, Tauranac founded Ralt in 1974.

By that time Perkins had made his way to Europe in pursuit of his Formula 1 dream, and played a role in the formative steps of the new marque.

“I’ve known Ron since, I think it was 1971 when Ron and Jack Brabham walked up the driveway of my rental house to have a look at an Elfin race car of Bib Stillwell,” Perkins told Speedcafe.com.

“Ron was a very approachable bloke, a very friendly bloke, as was Jack, and said ‘when you come to Europe give me a ring if you ever want a cup of tea’.

“When I got to England about a year later I did indeed ring him up and went down to see him.

“So we knew each other, and then when we got to 1975 – we were always in communication and he said ‘I’m starting racing again. I’ve bought my old factory back and would love you to come down and help me’.

“I was the very first guy down there. I pulled all the nails out of the walls, painted the wall of the factory.

“Meanwhile Ron was working at home in his garage on his drawing board and I was preparing the factory, so my connection with Ron and Ralt goes back to Day 1.

“He opened a huge door for me, and as a consequence of that association he made my first car.

“I imagine, certainly in his era, there was no bigger manufacturer of racing cars in the world, I’m pretty safe in saying that.

“The first Ralt he made, the very first one, we went to Thruxton and I put it on pole position and was leading the race by a bloody long way and I got a bit lackadaisical and spun the thing halfway through a corner,” he added.

“Ron was very unhappy with me.”

At the wheel of a Ron Tauranac Racing entered Ralt RT1, having supplied his own engine, Perkins claimed the 1975 European Formula 3 Championship.

It’s a period of his life Perkins remembers fondly, and a time when he learned a number of lessons that would serve him well in his own career in years to come.

“He knew what he wanted to do and I personally learned an enormous amount from Ron, especially in running a business,” Perkins explained.

“He didn’t go to Harvard and do any of that stuff, but (he taught me why it was important to) pay your bloody bills.

“We jumped many a queue of supply in England because the company you’re dealing with they all knew Ron paid his bills.

“It was a very enjoyable time of my life to work with Ron on a hands on basis.”

Tauranac went on to make Ralt the customer racing car of choice for a raft of junior formulae, with Formula 1 world champions Keke Rosberg, Nelson Piquet, and Ayrton Senna among the marque’s alumni.

Perkins’ career saw him return to Australia where he became a leading light in touring car competition.

The pair remained in contact throughout, and were reunited in latter years.

“Once he’d retired from Europe and come back to Australia, I asked him to come down and help me with issues with my touring car,” he explained.

“He stayed at my house for many months and helped us out.

“We had a lot of critical thinking, trying to improve our V8, which is out of his normal comfort zone but racing is still racing.

“We just got on well. I’m not sure whether we had the connection really for success, but we enjoyed each other’s company and talked a bit of crap.”

Yet despite the success he enjoyed, Perkins saw Tauranac as the same down to earth person who had walked up his drive way in 1971.

“Certainly all my life I knew him, he was Ron Tauranac, and he wasn’t a superstar,” Perkins said.

“His record of just getting on a doing it is just enormous.

“(He’s) A guy I very much admired. He should be very proud of what he did, and he would be, but he’d never tell anyone about it!”