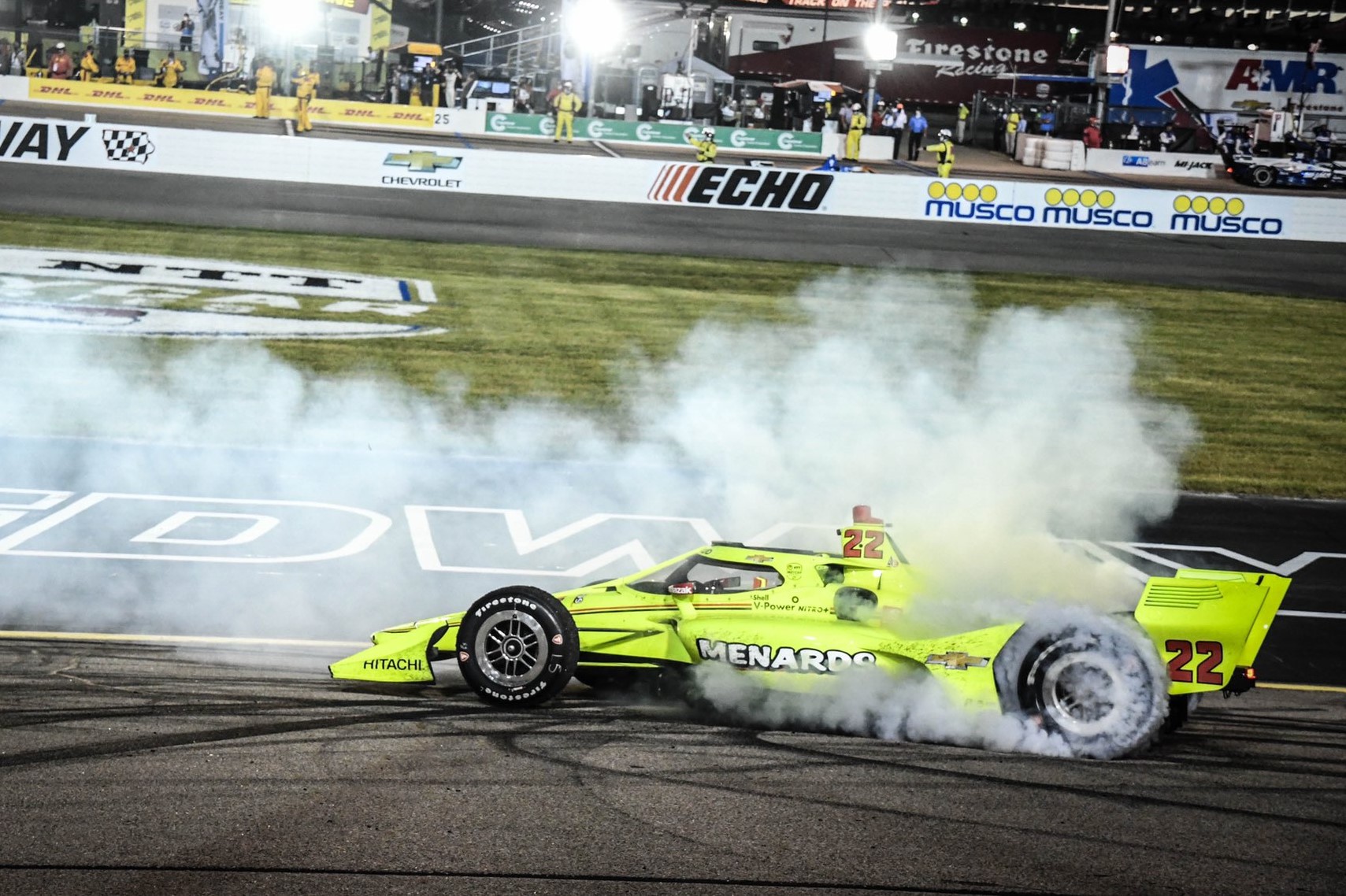 Simon Pagenaud has claimed a stunning last-to-first victory in a dramatic first race of IndyCar’s doubleheader under lights at Iowa Speedway.

The 250-lapper featured two consecutive cautions, the first of which was called after Team Penske’s Australian ace Will Power was sent into the wall midway through the race after a wheel nut came loose.

Conor Daly (#59 Carlin) bolted from his maiden pole position but was caught by Josef Newgarden (#1 Team Penske) as the leaders hit traffic. Newgarden then took the lead on Lap 14 and quickly built a lead of his own.

Takuma Sato (#30 Rahal Letterman Lanigan Racing) rolled the dice with strategy on Lap 47 and was the first to pit before Pagenaud came in on Lap 59.

Ten laps later, Power – having cleared Daly – pitted from second and gained track position over Newgarden, who had a delay on the right rear wheel during his stop.

As the field cycled through the first round of stops, the out-of-sequence Sato had moved into first, with Felix Rosenqvist (#10 Chip Ganassi Racing) the last to make his first stop on Lap 83.

Sato enjoyed a five-second lead over Power, who led a battle pack of teammate Newgarden and the McLaren-Arrow duo of Pato O’Ward and Oliver Askew.

Power, chasing his first Iowa win, was monstered by lapped cars on fresh rubber after being cleared by Newgarden on Lap 125. Two laps later, Sato ended his big second stint and made his second stop.

A botched stop – where the front left wheel nut wasn’t fastened properly – sent Power into the outside wall on the front straightaway on Lap 144, triggering the first caution of the race. Replays showed Power was lucky to avoid injury when the errant wheel bounced over the #12 as it slid towards the infield.

On the restart, rookie Rinus Veekay (#21 Ed Carpenter Racing) checked up behind Pagenaud and was hit by Colton Herta (#88 Andretti Harding Steinbrenner Autosport), who was sent flying through the air and over Veekay’s car.

A second caution was called, and both drivers were not only out of the race on the spot, but fortunate to walk away from the terrifying incident.

Among the chaos, Newgarden lost a lap and was wedged in the leading pack when the race went green. The reigning champion regained his lap on Lap 173 and set about catching the leaders as the final pit sequence approached.

O’Ward cleared Rossi and set off after the lead duo. All the while, Dixon closed on Pagenaud once they hit traffic, but the 2016 champion held off the charging Kiwi to register his first win of the season, his first win at Iowa Speedway, and first win since Toronto 2019.

“Qualifying was disheartening, but these guys never give up, it’s amazing to get the Menards car to be shining here in Iowa,” Pagenaud said after the race.

“I can’t believe it, I have to rewatch the race. How did I get here, I don’t know.

“The last 50 laps, there was a lot of tension. When Dixon’s chasing you, you’d better hit your marks.”

The second race of the Iowa doubleheader commences at 10:45 AEST on July 19.