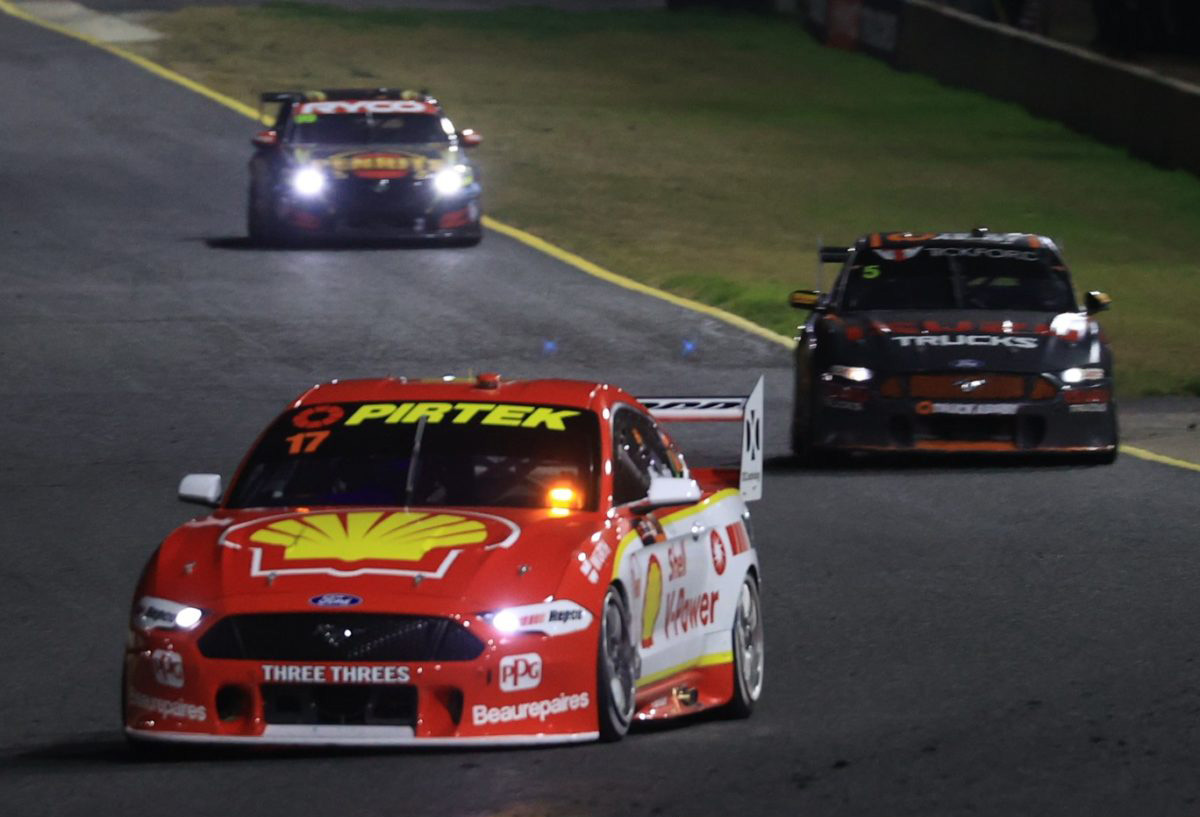 Scott McLaughlin has claimed a fourth win of the season while Lee Holdsworth finished second in the night race at the Truck Assist Sydney SuperSprint.

McLaughlin won Race 10 of the Supercars Championship having started with hard tyres on his Shell V-Power Racing Team Ford and finished on the softs, while Holdsworth (#5 Truck Assist Mustang) and third placed Anton De Pasquale (#99 Penrite ZB Commodore) used both of their sets of soft rubber in the 32-lapper.

Shane van Gisbergen finished fourth after leading until Lap 20 on soft tyres and coming home on hards, with his Red Bull Holden team-mate Jamie Whincup doing the opposite and taking the chequered flag a spot further back.

Despite the discrepancy in grip, McLaughlin (#17 Mustang) bettered van Gisbergen (#97 ZB Commodore) from the inside of the front row when the lights went out.

Van Gisbergen was still able to go with the DJR Team Penske driver on the outside through Moffat Corner, where McLaughlin cranked sideways, and take the lead out of Bond Bend (Turn 2) despite running wide at the stop.

Cameron Waters (#6 Monster Energy Mustang) dived down the inside of Car #17 at Turn 4 and Holdsworth was third by the time they popped out from behind Corporate Hill.

That meant that the top three were all on softs, and De Pasquale made it the top four a handful of laps later when he got by McLaughlin at Bond Bend.

Van Gisbergen came under early pressure from the Tickford Racing duo but was 1.4s ahead of Waters at the end of Lap 10, at which time McLaughlin pitted from fifth at 9.5s off the lead and switched to softs.

The championship leader resumed in 18th, one position up on Whincup, who had made the same pit stop from seventh position a lap earlier.

Holdsworth was harassing Waters and eventually got by at Bond Bend on Lap 12, but continue to give up time to van Gisbergen until he was 2.9s behind when he pitted on Lap 14.

Tickford threw a green set of softs at Car #5 and Holdsworth exited the pits just ahead of McLaughlin and De Pasquale, who had also been put on the soft-to-soft strategy.

Under big pressure on cold tyres, Holdsworth slipped wide at Turn 3 and that allowed McLaughlin through at the next corner, with De Pasquale following.

Waters was into the lane on Lap 15 and onto a set of hards but rejoined several seconds behind Holdsworth, who was pressuring De Pasquale.

Van Gisbergen went all the way to Lap 20 before he got rid of some ageing softs and while he was slow out of the box, McLaughlin, De Pasquale, and Holdsworth were already long gone.

On hards, van Gisbergen in fact emerged just ahead of Whincup and was soon passed by his Triple Eight Race Engineering team-mate, while Holdsworth got underneath De Pasquale for an effective second position at Turn 4.

When Nick Percat (#8 Dunlop Super Dealer ZB Commodore) pitted on Lap 21, taking new hards down the working side, McLaughlin led by just over a second back to Holdsworth.

The Tickford pilot got the margin back inside 0.9s on Lap 24 but never seriously threatened the championship leader, who went on to win by 1.3150s.

“I’m really thankful I got a good start just because I was able to position a little bit better,” said McLaughlin, whose advantage in the Virgin Australia Supercars Championship is now 75 points over Whincup.

“I got a little bump from Cam and it was good, hard racing. I knew they were going to come at me pretty hard so just to hold on those first few laps and then I managed to stay with them closer than I thought.

“Far out, the car was so good on both compounds so I’m really proud of the guys. These guys have been working so hard at Shell V-Power Racing to get our pit stops right and and consistent and every time we come, it’s mint. I’m really proud of everyone.”

De Pasquale was just over 3.4s further back from Holdsworth at the end, while van Gisbergen passed Whincup on the final lap to take fourth.

Waters finished sixth, with Fabian Coulthard (#12 Shell V-Power Mustang) staying on hards and changing only two tyres on his way to seventh.

Chaz Mostert (#25 Mobil 1 Appliances Online ZB Commodore) rose two spots from his starting berth to get to the end in 11th on a hard-hard strategy, and David Reynolds (#9 Penrite ZB Commodore) was 14th having done likewise.

The Sunday programme commences with back-to-back 10-minute qualifying sessions for Races 11 and 12 respectively, from 10:45 local time/AEST.