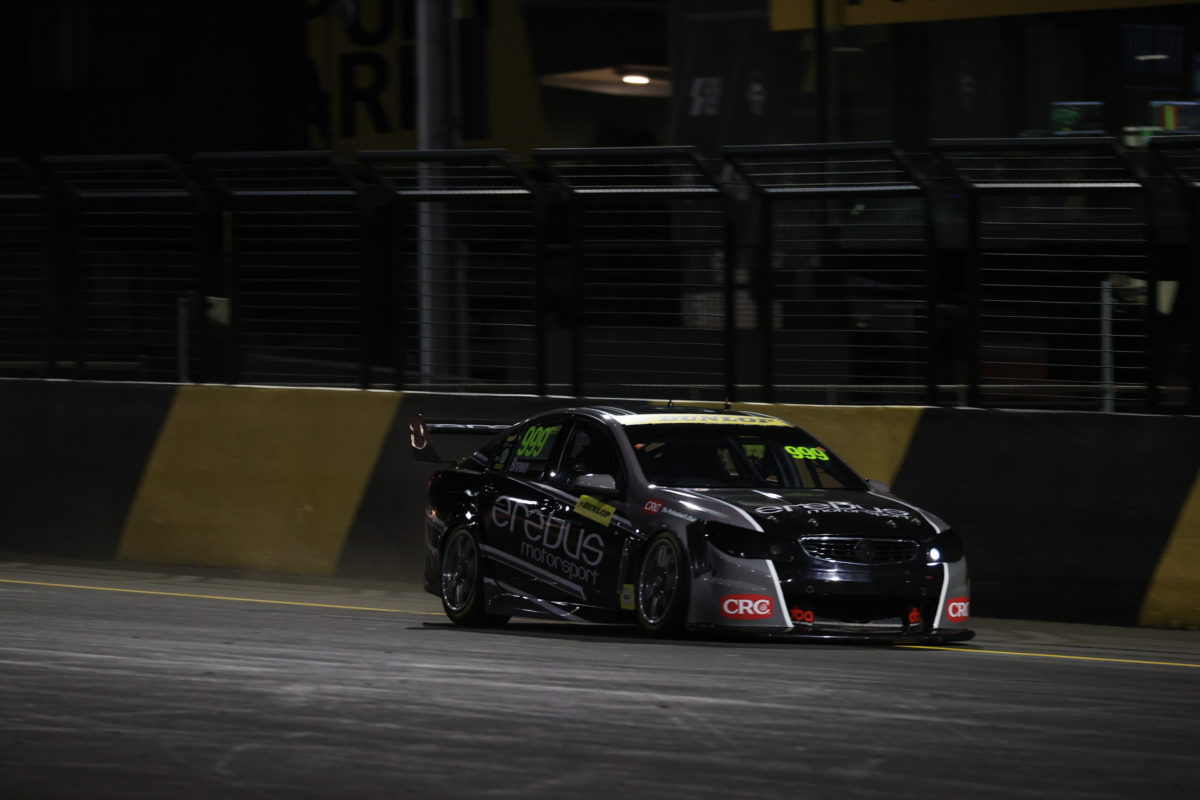 Will Brown has claimed a second career Super2 race win while title rivals Thomas Randle and Brodie Kostecki both suffered significant setbacks under the lights of Sydney Motorsport Park.

Brown inherited second position in Race 1 of Round 2 when Kostecki’s Eggleston Motorsport entry slowed with an alternator problem early in the 18-lap race and first when Randle made a hash of a restart on Lap 12.

Randle took the chequered flag in second position, just behind the #999 Image Racing VF Commodore, but was officially classified ninth outright and eighth of the Dunlop Super2 Series competitors by virtue of a 15-second penalty for the breach at the end of the Safety Car period.

That at least left him one spot up on Kostecki who had pitted at the end of Lap 3 before being sent back onto the race track at the very back of the field, but Brown has also taken the ascendancy in the Super2 standings.

Randle (#16 Altima) had made an impressive launch from pole position while Feeney bogged down on the outside of the front row, allowing Brown to drive around him and take second position, ahead of Kostecki.

Ojeda got perhaps the best start of anyone but got pinched by Kostecki into Moffat Corner (Turn 1) and emerged behind Feeney, who salvaged fourth position from the start.

Kostecki had managed to save enough tyres through practice and qualifying to have greens on the working side of the #38 VF Commodore for the race and was attacking Brown from the outside through Brock’s 05.

The pre-race series leader could not make the move stick initially, but hung there through the following left-hander and was able to clear Car #999 as they arrived at the Corporate Hill sweeper.

Randle led by 2.0s at the end of the standing lap but the margin was gradually falling before Car #38 slowed and Kostecki retreated to the pits.

Ojeda began to apply pressure to Feeney in what had become a battle for third and took the position at Corporate Hill on Lap 8, moments before a Safety Car was called in order to have Zane Morse (#11 Zane Morse VF Commodore) recovered after he ran off at Moffat Corner.

Brown had trailed Randle by almost 2.5s when he inherited second place from Kostecki and had made up a second before the yellows wiped out the rest.

He got another free kick at the restart when Randle accelerated and then braked, allowing the Erebus Motorsport junior to pull aside and take the lead into the first corner on Lap 12.

Worse was to come for Randle minutes later when Race Control confirmed the penalty, which put him an effective 16th at the time and, critically, one Super2 position behind Kostecki.

The latter made up two more spots as a result of the chain reaction caused when Josh Fife (#14 Brad Jones Racing VF Commodore) ran wide at Bond Bend on Lap 16.

As Fife turned back down, Matt Chahda (#18 Matt Chahda Motorsport FGX Falcon) shifted to his left and was half spun by Zak Best (#78 MWM Altima), with Kostecki moving past both to take up 11th outright.

Randle caught Brown by the time they started the final lap, having dropped over a second back at one point, but could not find a way through.

In any event, Brown was going to be classified the race winner, but he did so by being first to the chequered flag, 0.5653s ahead of Randle and 2.8292s up on Ojeda.

Jaylyn Robotham led the Super3 class throughout in his #28 MW Motorsport FG Falcon and finished eighth outright after Randle’s penalty.

A post-race investigation will be conducted into a mid-pack tangle on Lap 1 in which Best was spun by Chahda between Turns 2 and 3.

They are provisionally classified 12th and 13th respectively, outright.