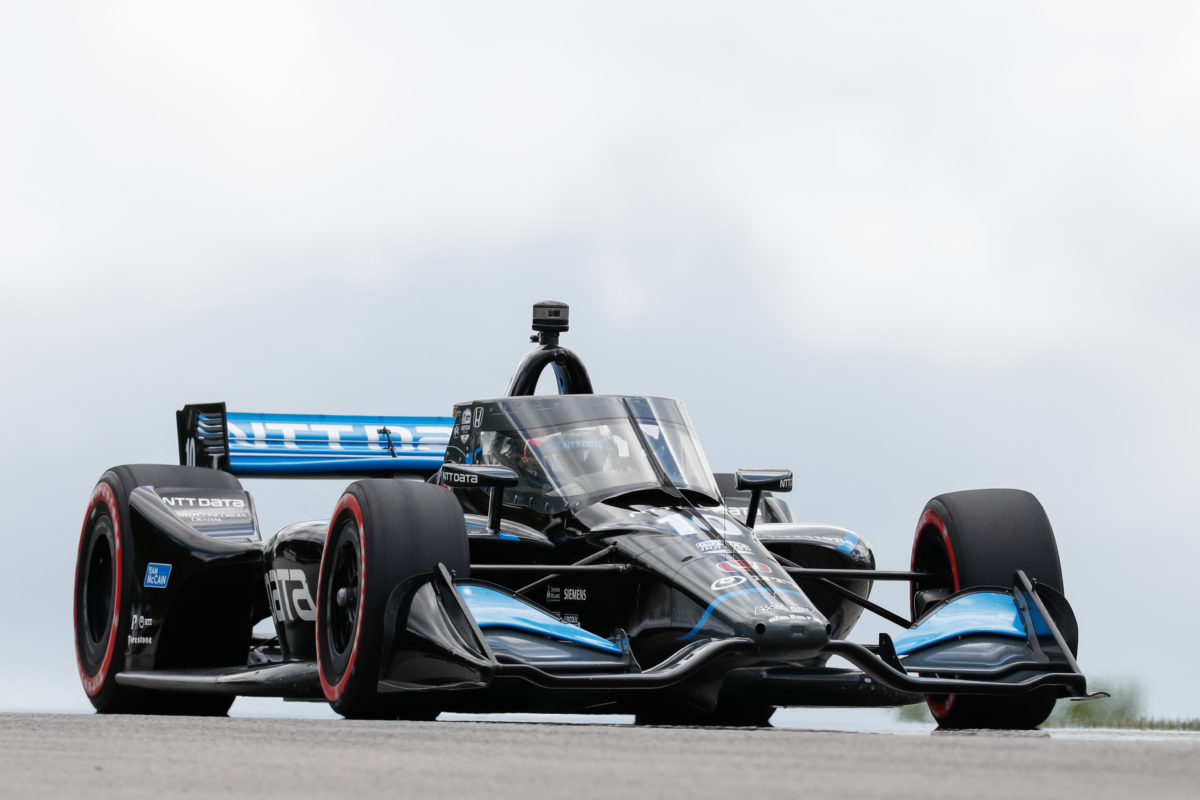 Felix Rosenqvist has won the second race of IndyCar’s Road America double-header by passing Pato O’Ward on the penultimate lap, as Will Power had another dramatic day.

While Chip Ganassi Racing is now four from four to start 2020, Scott Dixon’s winning streak came to an end with a finish of 12th.

Power was one spot better after an eventful afternoon, including two incidents and separate off in the first five laps.

O’Ward (McLaren SP) qualified on pole and led the field away from Colton Herta (Andretti Harding Steinbrenner Autosport) and Alex Palou (Dale Coyne Racing w/ Team Goh), but there was carnage behind that led to a Caution almost immediately.

Power tagged Ryan Hunter-Reay, whose #28 Andretti Autosport car went across the nose of Car #12 and into the wall as they reached the first corner, then made side-to-side contact with Graham Rahal as he moved for fifth at Turn 3.

Rahal also ended up with his Rahal Letterman Lanigan entry bouncing off a wall given that the initial hit led to another, from Rosenqvist, as the Caution was called.

Power was put to the back for the Lap 5 restart as punishment for avoidable contact, elevating Rosenqvist to fifth, just behind Dixon.

There was another Caution after a lap due to Power running off at Turn 13 and, despite bouncing through the infield and having to have his car refired, he managed to stay on the lead lap.

Palou passed Herta for second upon the second restart, with the top five then unchanged until Herta and Dixon pitted on Lap 12.

By the time the cycle had completed on Lap 23, O’Ward was back in front, Rosenqvist had not long passed Palou on the road for second, Alexander Rossi was fourth, and Herta held fifth.

Dixon, who had a slow stop, had passed Rossi when the Andretti Autosport driver was on cold tyres but could not keep him behind and sat sixth, with Power 17th.

However, having just ceded that sixth position to Marcus Ericsson (Chip Ganassi Racing), Dixon was back into the lane for his second stop on Lap 24.

O’Ward was about four seconds up on Rosenqvist when he pitted on Lap 28, and the Swede peeled off a lap later, at which time he resumed in second position.

Rossi emerged third, with Herta an effective fourth from Ericsson and Dixon.

Ericsson took fourth from Herta as the final pit stops kicked off, with Dixon stalling when he tried to exit his box.

Rosenqvist started the run home five seconds in arrears of O’Ward, but had caught the McLaren SP driver on the penultimate of 55 laps and made the pass at Turn 6.

He went on to take his first IndyCar win, and deny O’Ward the same, by almost three seconds, with Rossi, Ericsson, and Herta filling third through fifth for the final stint.

Power stretched to only two more stops in 50 laps after two in the first five as he took 11th, and Dixon got back to 12th from as low as 19th after his final stop.

The New Zealander continues to lead the series by a reduced, 54-point margin over Herta.

Another double-header will be held at Iowa this coming weekend (July 17-18, local time).