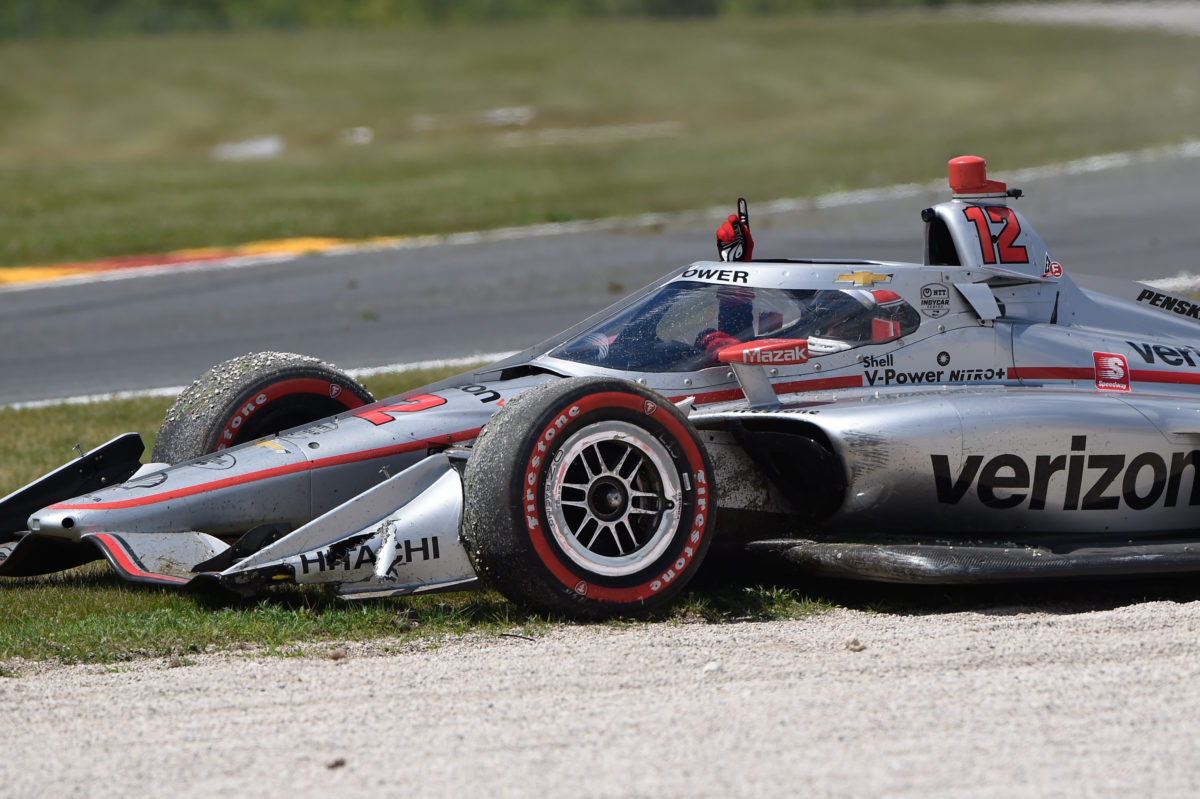 Ryan Hunter-Reay and Graham Rahal have described Will Power as desperate and a “wrecking ball” after being on the rough end of separate incidents with the Australian at Road America.

Hunter-Reay was sent spinning into the wall before the field arrived at the first corner for the second race of the double-header as a result of a touch from behind from the #12 Team Penske entry.

Two corners later, Rahal had a wheel all but ripped from his Rahal Letterman Lanigan car when he was bumped by Power and then off the track by Felix Rosenqvist as he tried to correct.

Power was sent to the back of the field for the restart as punishment for avoidable contact, and then sailed off himself before completing a full racing lap.

It capped off another rotten weekend for the 2018 Indianapolis 500 winner, who was left bemused after a slow pit stop cost him the lead with 16 laps to go in the previous day’s race and allowed Scott Dixon to triumph.

“I don’t know where he’s going,” said Hunter-Reay on NBC Sports as he watched a replay of his incident for the first time.

“He seems to be driving a little bit desperate today, so he’s been a wrecking ball so far; I don’t know.

“It’s not very like him. I mean, he finally had a better day yesterday, so he’s getting back up the points and it’s a long season ahead.

“I don’t know, I’m not really sure what’s going on, but you definitely can’t win the whole thing in the first corner.

“I’ll ask him about it but he hit me and then took Graham out, and now just took himself out, so I’m not really sure what’s going on there but I’ll give him the benefit of the doubt; maybe he’s feeling a little off today.”

Rahal, who was also interviewed during the telecast as Power ran off, quipped on the subject of the penalty, “I mean, he’s getting what he deserves today. He took Ryan out, I think, and me.

“It’s frustrating because it’s a desperation move, and I’ve made them before, so I know them well

“But, I was just disappointed because I thought that we had a really good chance today and some guys (were) very aggressive on the start, we wanted to be one of them, it just didn’t quite work out.

Having been into the pits twice in the first five laps due to those incidents, Power got home in 11th position with two more stops in a race which most three-stopped.

He claimed that the penalty was not deserved, and remarked that his final result was “a small victory”.

“Man, just a rough race for us today,” said Power.

“I guess in the end, things could have been worse, and an 11th place finish is a small victory.

“I don’t really agree with the penalty from early in the race. I felt that was just a racing deal.

“So, we had to come in and change the front wing, then I made a mistake and ran off the track, and we had to make another stop for another wing change.

“Just not the day we needed for the Verizon Chevrolet. Got a podium yesterday but just didn’t have it today.”

Power remains seventh in the IndyCar Series having arrived at Elkhart Lake back in 15th, with another double-header coming at Iowa from this Friday (local time; Saturday morning AEST).